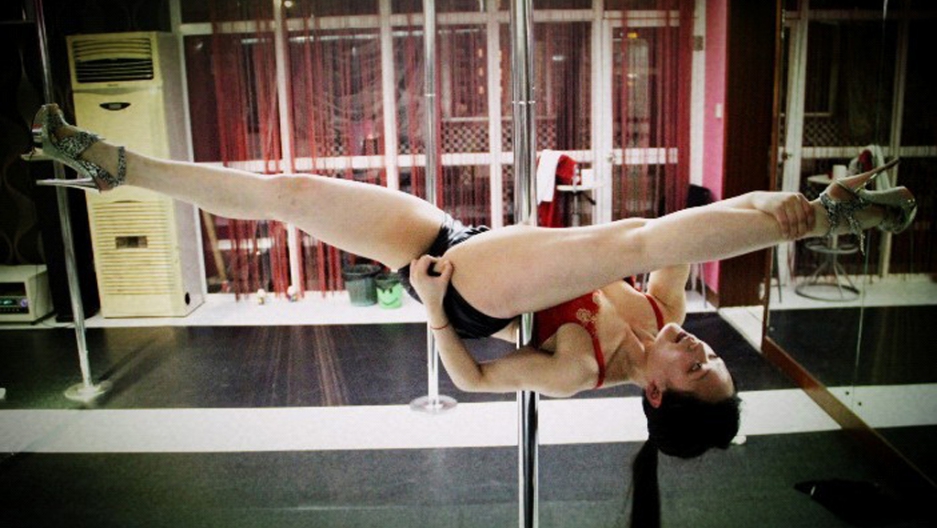 SHANGHAI, China — Two pairs of girls stand, one in front of the other, staring at their own reflections in the mirror and gyrating in the direction of a shiny pole to the beat of techno music.

"The first time I saw pole-dancing, I was in a Shanghai night club five to six years ago,” she said. Then just 17, she was instantly hooked.

Now the spunky 22-year-old from Shanghai has managed to turn her teenage dream into a full-time career. She teaches pole-dancing at the Hualing International Dance School in the Jing’an district of Shanghai, a school that has studios located throughout mainland China.

The school's first pole-dancing classes were offered in the spring of 2006, with a few apprehensive students showing up. Since then, interest has grown inside and outside the dance studio, with dancers being hired to perform in the community on a regular basis.

Though pole-dancing is not without its critics, particularly among more traditional Chinese, its growing popularity indicates that society is warming to the idea of women strutting their stuff — in more ways than one.

All 57 of the dance school's branches now offer pole-dancing courses. Su’s class in Shanghai has maxed out at 18 students per session; last year about 2,000 women — and some men — joined up.

Pole-dancing, which is by no means a trend confined to China, has piqued the nation's interest outside the dance studio. An Xin, 32, the dance school's head director, said Donghua University's music department recently invited the pole-dancers to perform for students and faculty.

“It was very well received,” he said.

Su performs at local and international competitions. She and a group of other teachers specializing in reggae and street dancing are asked to perform in the community about three times a week, she said, often at large-scale commercial events.

“Most of my performances are done at bars and sometimes at company events,” she said. They have even been asked to perform at a local hospital.

But as the dance's popularity grows, not everyone feels the same way. Pole-dancing — not surprisingly — is looked down upon by some social groups, and Su has been forced to make some tough decisions as a result of her interest.

“After my boyfriend saw me dancing for the first time he broke up with me,” Su said. Asked why, she pressed her chest forward with both hands. “I showed cleavage during the performance. He is very conservative.”

At his exhibition in Shanghai, entitled “Encounter with Remarkable Women,” photographer Xiao Quan chronicles the status of lesser- and more well-known women from assorted backgrounds in China, including that of the renowned choreographer Yang Liping. More than 20 years ago, Xiao began following Yang's career, and watched as her exotic songs and dances went from being kept to the bucolic farms of the Yunnan Plateau to touring Europe and the United States.

Xiao remembers a time when dancers and models were considered unsuitable for marriage. "Before the '80s, even posing as a model would render you a second-class citizen,” Xiao said.

But those perceptions began to change as China’s economy opened up in the late '70s and '80s. Women had more opportunities to go out and make money. Gesturing to a recent photograph of a belly dancer taken in Shenzhen, Xiao added, “Women are more self-confident now.”

For Su, her family's approval came only after she became financially independent.

“Now that I have succeeded in earning my own money, they have accepted,” she said of her parents.

Convincing her boyfriend proved more difficult — though one of her students thinks she has a solution.

“I brought my boyfriend to the studio to see,” said Shi Pandan, a pole-dancing student in Shanghai. “He accepted after I convinced him that coming here would help me lose weight.”