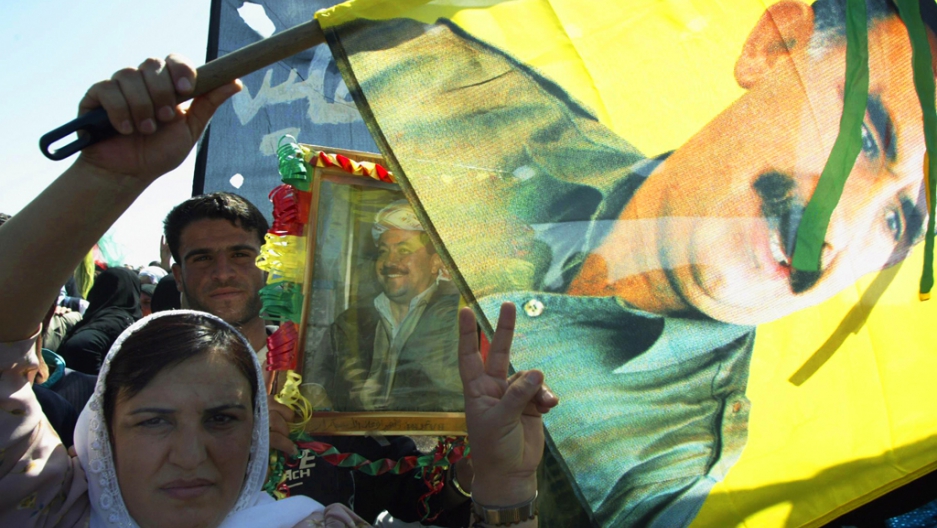 Some of the 3000 Syrian Kurds, supporters of outlawed Kurdistan Workers' Party (PKK) in the Syrian town of Qamishli.
Credit: Ramzi Haidar
Share

BEIRUT, Lebanon and HASSAKE, Syria — For 24-year-old Azad, a poet and political activist from Amouda, in northeast Syria, it was a single word, cried from streets on the other side of the country, that cut through the tangle of ethnic and political division that has defined Kurdish identity in Syria for generations.

“When people from Daraa shouted for freedom, not for pan-Arab unity, not for liberating Palestine or for unity with Egypt and Lebanon as in the past, it pushed young Kurds in Syria to feel the same as them,” he said.

“What happened in Daraa has increased my national pride. Now, I feel more Syrian than ever.”

Stateless and suppressed under four decades of Baath Party rule and unconvinced by recent concessions to them by President Bashar al-Assad, a debate is raging among Syria’s Kurds, the largest ethnic minority. The argument is over whether to throw their full weight behind the campaign to topple the regime, a weight opposition organizers hope could prove a tipping point.

On Thursday, Al Arabiya TV reported that Kurdish political parties rejected Assad's invitation to meet, due to pressure from the “Kurdish street.” Last Saturday, 12 of Syria’s outlawed Kurdish parties had accepted the unprecedented invitation to meet with the president to discuss ways out of Syria’s escalating crisis.

The rejection followed the killing of at least 25 protestors in the northwest Syrian town of Jisr al-Shughur on Saturday.  After the killings, a military assault on the town on Monday resulted in the deaths of 120 security personnel, according to Syria’s state-controlled media, a sharp escalation in the deaths of security forces.

Several residents of the town near the border with Turkey said the deaths of security personnel had occurred after some soldiers refused to open fire on civilians and were then attacked by loyalist troops. Activists, though, have conceded there may be individual cases of residents taking up arms to defend themselves.

Thousands of terrified families fled their homes after the state media warned the military response against Jisr al-Shughur, a town of 50,000, would be “decisive.” Tanks and troops massing around the town were also reported. By Thursday, the U.N. refugee agency, UNHCR, reported at least 1,000 Syrians had crossed the border into Turkey in the last 24 hours.

“Kurdish parties are still looking for more favorable circumstances for such a meeting [with Assad],” said a statement from the Kurdish Yakiti party, on behalf of the 12 parties who rejected Assad’s offer.

Numbering around 1.7 million, or about 8 percent of the population, Kurds in Syria have long suffered marginalization under the Baath Party. Founded on autocratic rule and an ideology that recognises only Arabs as citizens the Baath regime is fearful of Kurdish demands for greater autonomy, given the successful self-rule of Kurds in neighboring Iraq.

In 1962, a year before the Baath Party seized power in a military coup, 120,000 Kurds in Syria’s north-eastern Hassake, bordering Turkey and Iraq, had their citizenship taken away from them on the grounds that they had not been born in Syria.

“I did two years national service in the army and then my elder brother told me that I had no Syrian nationality,” said Firharad, a grandfather of 20 from a remote village near Malkiah, 60 km north-east of Hassake.

The old man broke into tears when recalling the hardships of a life spent without official papers and limited access to state-run health and education, desperate that his grandchildren would not have to repeat the experience.

“I spent my life without education, without a proper job,” he recalled. “Sometimes I got temporary work in the state sector, but I would always have to move to another job. I tried to go to Europe and the Gulf to work, but I couldn’t get a passport,” said Firharad.

Two years ago, his wife died after she was refused heart surgery in the state-run Assad University Hospital in Damascus.  The rejection came on the grounds she was not a Syrian citizen.

After attempting to create an ‘Arab belt’ in northern Syria by expropriating Kurdish land and gifting it to Arabs in the 1970s, the regime initiated a policy of repressing Kurdish identity.

Kurdish language and books were banned from schools, celebrations such as Nowruz, the traditional Kurdish New Year, were prohibited, and Kurdish political leaders were routinely imprisoned.

The long-term policy of dispossession and discrimination against Kurds in Syria has left them among the poorest communities in the country, with poverty levels doubling from 40 percent to 80 percent in just three years from 2005, according to a 2008 human rights report by the British Foreign Office.

Much of that drastic decline was the result a sustained drought in northeast Syria which has decimating local Kurdish communities, driving tens of thousands off their land and into urban centers.

For Azad, the uprising against the repression of the Assad regime represents an opportunity to regain a heritage threatened with extinction.

“I want to sing in the Kurdish language at a Kurdish wedding party,” he said. “Why should I be afraid to do that? Why should I expect security will arrest me on charges of ‘splitting Syria and joining a foreign state’? I want to write in my mother tongue, so I can express my feelings and what is in my heart."

But Azad’s revolutionary zeal has yet to be embraced by leaders of Syria’s 16 notoriously fractious Kurdish political parties.

Though with plenty of good reasons to protest, the Kurdish population, which remains controlled by its political rather than tribal leaders, has yet to turn out en masse.

Every Friday several thousand Kurds protest in Qamishli, Amouda, Hassake and surrounding towns and villages, but the crowds have yet to swell the mass rallies witnessed in Sunni Arab majority cities such as Banias, Homs and Daraa.

“For now we have made no decision to demonstrate in large numbers,” said the leader of the Kurdish party considered the most radical in Syria, who asked not to give his or the party’s name.

“If we are seen to lead big demonstrations the regime will say, ‘Look, the Kurds are demanding to split from Syria and establish their own state.’ Then the Arab tribes will confront us.”

But the reluctance of Kurds, yet, to throw their full weight behind the protest movement can also be explained by the regime’s apparently successful combination of swift but minor concessions made against the backdrop of years of increased repression, a dark harbinger of what might lie ahead should the national uprising fail to topple the existing power.

For the Kurds of Syria have already had their intifada: Days of rioting and mass anti-regime protests in and around Qamishli in March 2004, following a brawl between Arab and Kurdish football fans, that led to security forces killing at least 36, mainly Kurdish residents.

What followed that unrest was five years of systematic repression. Even as Assad pledged to restore Kurdish citizenship following decisions at the June 2005 Baath Party conference, a leading Kurdish cleric Skeikh Mohammed Khaznawi was being tortured to death and security forces were rounding up almost all Kurdish political leaders.

In a November 2009 report Human Rights Watch documented the arrest of 15 prominent Kurdish leaders since the 2004 uprising. Of a total of 30 Kurdish detainees interviewed, 12 said they had suffered torture. Many were called in for questioning repeatedly and banned from travelling outside Syria.

“So many Kurdish leaders are in detention that they think it’s too dangerous now to protest. They have not cast off their inhibitions,” said Robert Lowe, an expert on Syrian Kurds and Manager of the Middle East Center at the London School of Economics.

“Most of the 16 parties have someone in detention or awaiting trial. They know what will happen to them if they protest and think it’s probably not worth it.”

Syria’s repression of Kurds has also been bolstered by its strengthened relationship with Turkey over the past five years, where an estimated 15 million to 20 million Kurds routinely complain of discrimination and where a decades-old separatist war by PKK Kurdish rebels has cost more than 40,000 lives.

While Turkish Prime Minister Recep Tayyip Erdogan urged Egypt’s former President Hosni Mubarak to step down, from President Assad he has demanded only a increas in reforms. These statements come despite Turkey playing host to two meetings of representatives of the Syrian opposition in the past two months.

The heavy stick of arrests and repression has been complemented with some small carrots more recently: In March Kurds were allowed to celebrate Nowrouz unhindered by security forces. On April 7, President Assad decreed a restoration of citizenship to the Kurds, though it has yet to be fully implemented.

Kurdish protesters have also faced a markedly less brutal response from security forces, which have not open fired on them as they have on protesters elsewhere in the country.

So far, to the detriment of the wider protest movement, the regime’s tactics appear to be working.

“I see no need to make demonstrations which could lead to violence,” said a Kurdish tribal leader, close to the delegation of Kurdish and Arab tribal leaders that met with Assad on April 5.

“We have to remember what happened in 2004, when many schools, healthcare centers and agriculture centers were destroyed. Our demands are simple and there is no need to destroy our country to get simple things.”

Azad, the poet, agrees. His demand is simple too; that single word, one which may have lost its luster on older generations in the regime’s torture dungeons, but which yet shines bright for the young.

“We began a new era and we will not be divided from our Arab brothers,” said Azad. “We will increase our demonstrations until not only the Kurds, but all Syrians, have their freedom. We are all Syrians in the end.”