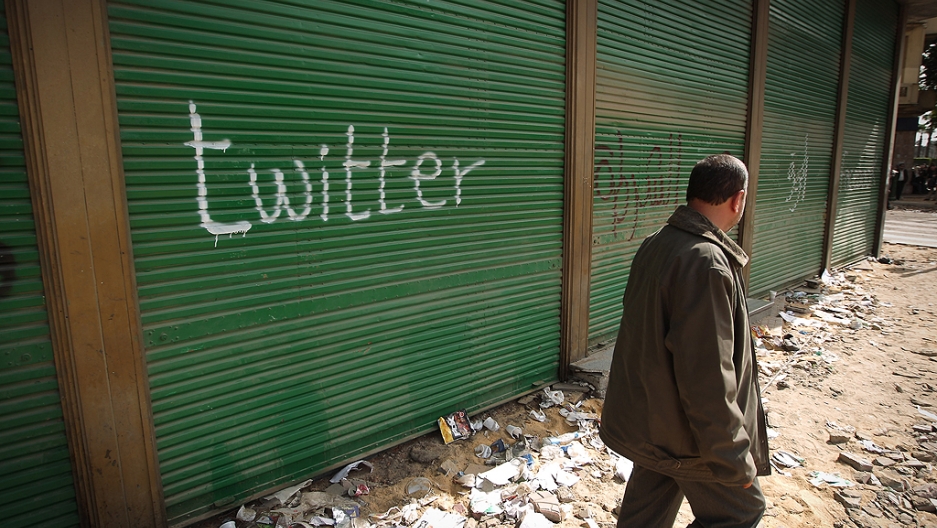 A shop in Tahrir Square is spray painted with the word Twitter after the government shut off internet access on February 4, 2011 in Cairo, Egypt.
Credit: Peter Macdiarmid
Share

In the spring of 2008, industrial workers in the northern Egyptian town of Mahalla erupted in widespread protest over low wages and a concurrent rise in the price of basic food staples like bread.

The demonstrations in Egypt's northern Delta were eventually quelled violently by police forces under the regime of then-president Hosni Mubarak. In the ensuing melee, an American journalist was caught in the police crackdown.
Before his arrest, the journalist had time to type out one word on a telephone using a nascent micro-blogging service.

Since then, Twitter has emerged as one of the world's preeminent sources of instantaneous news, current events, live commentary, and celebrity gossip. Where else can you find the latest thoughts of President Barrack Obama, al-Qaeda, and Justin Bieber in one place?

In the Middle East, some observers credit social media like Twitter for giving anti-government activists the flexibility and anonymity to coordinate behind the backs of massive state security apparatuses in countries like Tunisia and Egypt.

But for the same reasons that Twitter may have helped bring about the Arab Spring - real-time updates and the power of quick dissemination of ideas - Twitter can also pose a danger to some.

Political figures, often heavily scripted and well-rehearsed, can tweet off-the-cuff remarks that land them in hot water. Just ask American representative Anthony Weiner, who could face a congressional ethics probe after he admitted Monday to sending lewd photos of himself to a woman through Twitter.

In the Middle East, political figures and public offices have started using Twitter for the same reason as politicians in the US - communicating with their constituents, crafting their, message, and managing their image - especially with younger generations.

So if you're not already following the Twitters below, check them out for a window into the Middle East and North Africa.

And who knows? One of them, just maybe, might have their own Weiner moment on Twitter someday.

The above list is, of course, not comprehensive. But if we've left someone or something off the list that should be on it, send us a comment and we'll add it.