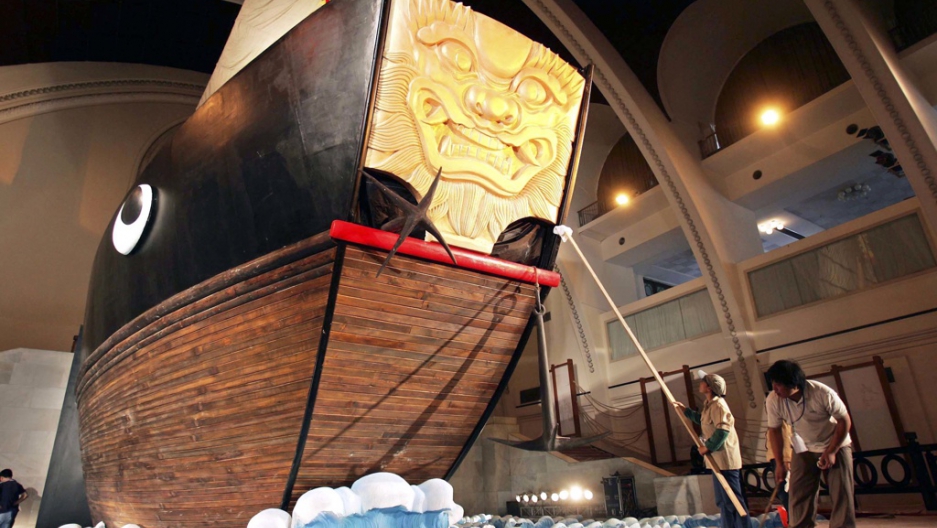 Workers clean a model of a Chinese ship sailed by Chinese explorer Zheng He. He led seven seven voyages in which he sailed from China to more than 30 countries and regions throughout the Indian Ocean and Persian Gulf from 1405 to 1433.
Credit: China Photos
Share

LAMU, Kenya — Did the Chinese come to East Africa before the Europeans?

China says yes, as do a growing number of Western historians. To prove the theory, Chinese and Kenyan archeologists are now searching the African coast for the fabled wreck of a Ming dynasty junk — an ancient Chinese sailing vessel — from the fleet of legendary 15th-century explorer Zheng He.

A new report, obtained by GlobalPost, reveals that the researchers have identified several shipwrecks of interest off the Kenyan coast near the World Heritage site of Lamu.

Despite years of excitable hype by China’s state media, the underwater archaeologists involved in the search are warning that the newly discovered wrecks could be from any era or country — and even if a sunken Chinese ship is found, it may no longer be intact or even identifiable.

Some reports in the Chinese and Kenyan media have implied that the wreck of a ship from Zheng He’s fleet has already been found — and by extension, irrefutable historical proof that Chinese explorers visited Kenya before the Europeans. Evidence that China had friendly trading relations with Africa before the colonialists arrived would add luster to the Asian giant’s rapidly expanding presence on the continent.

According to this historical perspective, 600 years ago, Chinese sailors swam ashore after their vessel was shipwrecked off the coast of Pate Island, near Lamu. The Chinese sailors married the local people, and their descendants can still be identified by their almond-shaped eyes and light skin.

But the problem is that so far, there is no concrete proof that this tale is true. While archeologists have found Chinese coins and ceramics in Kenya, these could be explained by ancient trade routes that took Chinese goods through the Malacca Strait, and into India and the Arab world.

China state media claims that DNA tests have proven Chinese ancestry for some of the residents of Pate Island, but results have not been released. The light skin of these residents could just as well be explained by longstanding trade between the area and India, and migration from the Arab peninsula to the Swahili coast.

The first phase of a $3 million, three-year project to try to find conclusive evidence of Zheng He's journey occurred between late December and January.

A draft of the archaeology team’s first progress report, obtained by GlobalPost, lowers expectations that this missing ship will be found, warning that “we are not searching for the Zheng He or the Chinese shipwrecks alone,” but rather looking for “underwater archaeological heritage” from any era.

In the Lamu archipelago, three underwater sites were identified to have features likely to be shipwrecks: the area just off Mwamba Hassan — a large rock off Pate Island that the Chinese ship is said to have hit — as well as areas off Manda Toto island and Shela village on the island of Lamu. Five other shipwrecks were discovered, one believed to be from the 14th century, near the coastal city of Malindi.

“The discovery of these sites in Lamu, where Zheng He’s ship is believed to have sunk, was a major success and step towards discovery of this shipwreck,” says the report.

The second phase of the project, scheduled to begin in November, will further study the shipwreck sites by using diver surveys and analysis of artifacts.

“Since we know how Chinese junks were built and their likely cargo of that time, they are easy to identify,” the report says. “However this depends on whether the ship is well preserved under the sea."

When GlobalPost visited one of the project’s research sites in January, a team of Kenyan and Chinese scientists were working together just a hundred yards off Shela beach, a posh holiday area on Lamu Island frequented by Hollywood celebrities and European royals.

“Zheng He visited Malindi two or three times. During one of his visits, one of the boats in his fleet capsized, but we do not have physical evidence,” said Philip Wanyama, a Mombasa-based assistant site scientist for coastal archaeological research, and one of the divers searching off Lamu Island.

“What we are seeking is material clues to confirm that written information,” he said.

But as in the report, the team of Kenyan and Chinese archaeologists in Lamu also tried to play down the focus on finding Zheng He’s storied lost ship.

“We are not looking for the ship alone, but doing a comprehensive survey,” Wanyama said.

“Because this is the first time that we have come to Kenya, there are bumps to work out," said Li Jianan, team leader in Lamu and director of the archeology institute at the provincial museum in Fujian, China

The progress report notes that the Kenyan coast has been visited by waves of foreigners for centuries, including Arabs, the Portuguese and the British.

“There is therefore likely to be more underwater cultural heritage in our waters than we can imagine,” it said. “For this reason we are looking for all shipwrecks, no matter their nationality.”

If a ship is found intact, it can be identified by the researchers, and in that case “we will with certainty say, 'yes, this is a Chinese junk,'” the report said. “But if it has succumbed to the elements of nature including bacteria, it is only the available artifacts such as the cargo and any wood remains which will give us clues about this Zheng He shipwreck.”