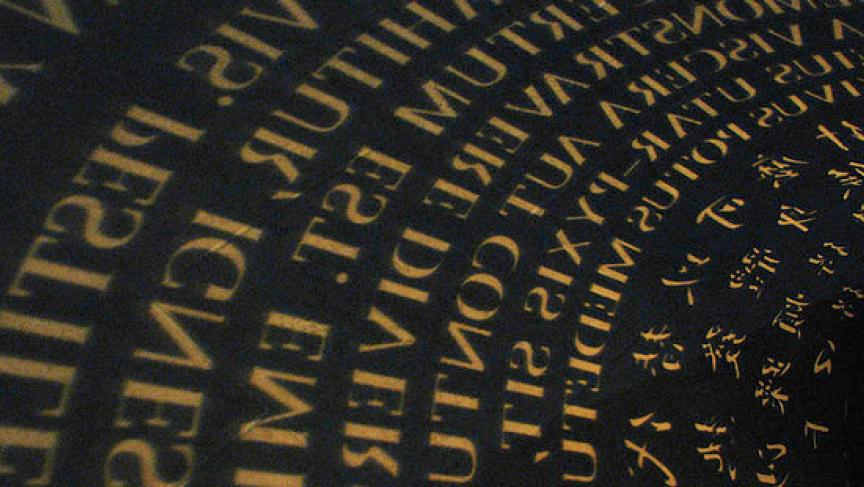 Share
Once every month or so, Carol Hills and I pick our five favorite language stories. Big stories, obscure stories, we love 'em all. Here's the latest rundown: 5. Slangy Scrabble. New entrants in the Collins Scrabble Dictionary include innit, grrl and thang. The dictionary is called Collins Official Scrabble Words, and for now it is only available in the UK . So, maybe you don't want to use any of these words quite yet, if you're playing on US territory. (Also, Brits and Americans appear to disagree on the extent of a certain r-roll: it's usually grrl in Britain and an angrier grrrl in the US. I think we should go with grrrl. The word was invented in the US. ) Other "new" words now permitted in Scrabble include heatwave, catflap and inbox. 4. Origins of Japanese. Of the major global languages, Japanese is perhaps the most shrouded in mystery. No-one can say for sure where it came from, and how it initially developed. Among the many theories, two predominate. The first is that it is a language indigenous to Japan, developed by the first people to settle there more than 12,000 years ago. The second theory is that the language came into being on mainland Asia, arriving in Japan some 2,000-2,500 years ago during a mass migration of farmers from the Korean Peninsula. There is some DNA and archaeoligical evidence to back this up. And now there may be some linguistic evidence. A new University of Tokyo study traced the roots of 210 key pieces of voculabulary. Today, those words vary across the 59 Japanese dialects that the researchers studied. But those words shared common roots dating back nearly 2,200 years ago, possibly coinciding with the migration from the Korean Peninsula. 3. US Intelligence and metaphors. A research arm of the US government intelligence establishment wants to decode foreign languages through their metaphors. The reasearch agency is called the Intelligence Advanced Research Projects Activity (IARPA). It is inviting organizations to propose tools to analyze metaphors in foreign languages, as a way of gaining a deeper understanding of those languages and cultures. Laudable idea, though some might wonder what federal spies might then do with that information. That is assuming that the information will make any sense at all after it is put through the bureaucratic wringer of flow diagrams and metrics. 2. Barack Obama's bilingual early years. The release of a new biography of the President's mother, Ann Dunham, has shed further light on Barack Obama's early schooling in Indonesia. Indonesian was the language of instruction at the two schools Obama attended in Jakarta. Ann Dunham's decision to send him to Indonesian schools was in marked contrast to most English-speaking expats who sent their kids to English schools, and generally lived in an expat bubble. Ann Dunham herself eventually spoke fluent Indonesian. According to Janny Scott's biography, Dunham loved to tell stories of how she mangled Indonesian in her early days in Jakarta, when she was an English teacher. During one class, she tried to tell one of her students that he would get a promotion if he learned English. The correct way to say get a promotion in Indonesia is naik pangkat (literally: "go up rank"). But Dunham said naik pantat (literally "go up buttocks"). Obama's parents, incidentally, met at the University of Hawaii in a Russian class. 1. An experiment to get robots to speak to each other in a language of their own invention. Ruth Schulz of the University of Queensland (Australia) has developed a language for robots. She has concluded that human language is too cluttered to be useful to robots. So she's programmed her "lingadroid" robots to create vocabulary that works for them. This is mainly navigational language, mapped across simulated and real spaces: for each specific place the wheeled robots visit, they generate a certain set of programmed syllables that then becomes the agreed name of that place. (You can see the lingadroids in action here.) The place names are concise and sci-fi-y. And they don't have caps: pize, kuzo, reya. [Homepage Photo: Johnny Grim/Flickr]