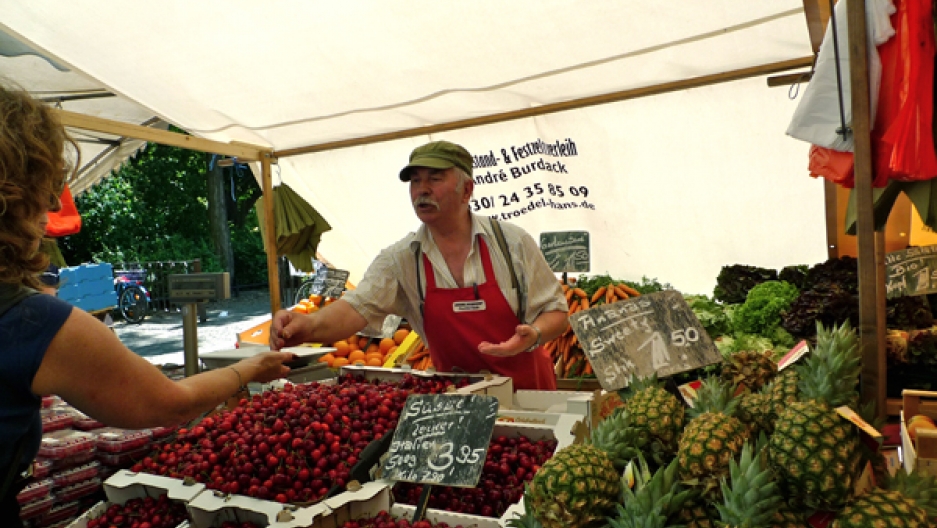 Share
German authorities still don't know the source of a deadly outbreak of E. coli that's sickened more than 2,200 people across Europe, mostly in Germany. On Sunday, officials announced that sprouts from a farm in northern Germany appeared to be the culprit. But tests failed to confirm that. In the meantime, German consumers have been advised to avoid raw sprouts, cucumbers, tomatoes and lettuce. It's all left German consumers — and produce sellers — feeling unsettled. Edith StÃ¶ber owns the organic Eichorn Farm. She's brought her produce to Berlin's Kollwitzplatz farmer's market. She said despite the fears of E. coli, people are buying her beets, spinach, and lettuce, and she thinks she knows why. "I only sell regional products, mostly grown on my own land, and I pick them in morning before coming to the market," StÃ¶ber said. "We've been here at the market 12 years, so people know us and our garden – we open it to the public each summer. It's simply a question of trust." StÃ¶ber said in her view, the food crisis is tied to imported vegetables that aren't in season in Germany, though there's no evidence that has anything to do with the outbreak "I think that almost all of the people who got sick ate lots of raw vegetables – many cucumbers, and many tomatoes – and they are just not in season," she said. "I think my customers appreciate that I'm not selling tomatoes, and very few cucumbers, because this is simply not the right time of year for them." One of those customers is Gerd Eggers, who's buying strawberries and rhubarb at the market. Though the source of the contamination remains unclear, Eggers said he has his own strategy for staying healthy. "I wouldn't buy supermarket vegetables at the moment," Eggers said. "Who knows where they come from?" He said he shops here because he has faith in Germany's organic produce markets. Eggers added that he believes in being careful; he's avoiding salad for now. But he thinks the story has been overblown by the media. He counts off other recent German food crises – eggs contaminated by dioxin earlier this year, and a previous scandal over spoiled meat. He predicts in a month, no one will even be talking about E. coli anymore. But a month can be a long time for some. Horst Knobel, a fourth-generation produce dealer, has a stall at the Kollwitzplatz market that sells fruits and vegetables from around the world – mangoes from Mali are on special today, as are Spanish raspberries. Knobel also has piles and piles of untouched tomatoes and cucumbers, which were originally blamed for the outbreak. "People don't want any tomatoes, cucumbers, or lettuce," Knobel said. "We get organically grown lettuce every day, regionally grown, freshly cut organic lettuce right from the field, and we just can't sell it." Still, customers are buying his wares, though fewer than usual, and they're choosing fruits over vegetables. Knobel said he thinks a lot of German shoppers prefer to come to local markets like this one where they can get some guidance about what's best – though they don't always take his advice. "They all want German apples, even though they're a year old now. The ones from New Zealand or Chile are better and fresher, but that's not what people want. They want apples from home," Knobel said. "They're old — how are they supposed to taste? But they don't want any apples from New Zealand or Chile, for God's sake. " He said he thinks people are overly cautious these days. But Doris Merkert is running against the tide. She's dared to select a few red German tomatoes still on the vine, but she doesn't plan to put them in a salad. "I'm going to put them on the grill," Merkert said. She added that she's not eating that many tomatoes right now, even though she doesn't think there's much of a problem. "So I grill them or cook them in a pan and then everything's okay. And it tastes good!" She's cautious, but still, she doesn't want to be wasteful. She grudgingly admits she has eaten cucumbers lately — because she didn't want to throw them away.