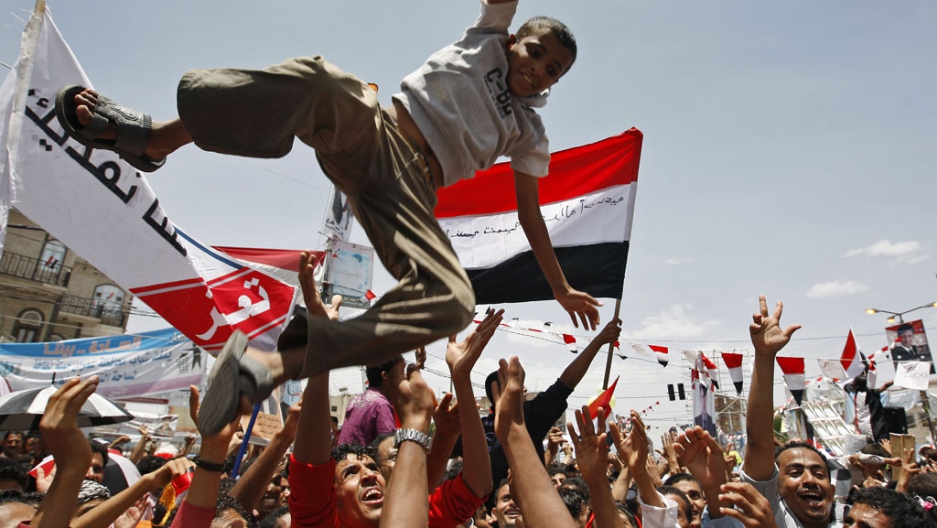 Yemeni anti-government protesters throw a youth in the air as they gather in Sanaa on June 5, 2011 to celebrate what they said was the fall of Yemen's regime.
Credit: Ahmad Gharabli
Share

RIYADH, Saudi Arabia — Protesters are cheering the exit of Yemen's president, who fled to Saudi Arabia to treat his wounds, as the end of the autocrat's rule. But analysts warn of the dangerous power vacuum created in his wake.

President Ali Abdullah Saleh was seriously injured in an attack Friday on his presidential palace, and arrived in Riyadh today for medical treatment.

Saudi Arabia and its Gulf neighbors, which have been pressuring Saleh to step down after months-long street protests, are unlikely to allow him to return to Yemen even if he recuperates enough to do that, analysts said.

“It seems to me that he’s effectively out now,” said Theodore Karasik, director of research and development at the Dubai-based Institute for Near East and Gulf Military Analysis (INEGMA). The Saudis “will keep him as a guest.”

Saudi Arabia and its partners in the Gulf Cooperation Council (GCC) don’t want to see Saleh go back because they “would like to see an end to this fiasco in Yemen,” said Fares Braizat of the Doha-based Arab Center for Research and Policy Studies.

Saleh’s sudden departure after 33 years in power presents Saudi Arabia and the United States with the prospect of an uncertain and possibly violent transition period in Yemen, a volatile, poverty-stricken country.

Both fear that protracted unrest would create opportunities for Al Qaeda’s Yemen-based branch, Al Qaeda in the Arabian Peninsula, to gain territory and breathing room in which to plan attacks.

Vice President Abdo Rabu Mansour Hadi has stepped into Saleh’s place to run the country, but it is not certain he will be accepted as leader by Yemen’s fractious political groups.

“There’s a huge power vacuum now because of how suddenly all this occurred,” said Karasik. Yemen is a highly tribal, fragmented society and “the country’s glue is melting rapidly.”

Saleh, 69, who landed here around 1:30 a.m. Sunday, underwent chest surgery today at a Saudi medical center, news wires reported. Earlier, the BBC reported that a piece of shrapnel about 3 inches long was lodged near his heart.

Before the Yemeni leader arrived, several other top officials injured in Friday’s attack — from either a mortar or rocket — were flown to Riyadh for medical attention. They included the prime minister, speaker of the parliament and a nephew of Saleh, who had a security role.

Saleh angered his GCC neighbors and Washington by reneging three times on verbal agreements to step down in order to end Yemen’s political crisis which began last January when youthful protesters took the streets. About 350 protesters have been killed by Saleh’s security forces, which attacked the unarmed demonstrators with gunfire.

Today, demonstrators in the Yemeni capital of San’aa turned jubilant after news spread of Saleh’s departure.

Vice President Hadi could face opposition from some of Saleh’s close relatives still in Yemen who command key military forces and security agencies, according to several sources here.

Paramount among them is Saleh’s son Ahmad Ali Saleh who heads the Republican Guard. He has a bitter rivalry with Hamid Al Ahmar, a tribal leader whose forces were accused of Friday’s shelling of the presidential palace.

“I don’t think we’re going to see Saleh going back to Yemen,” Michael C. Hudson, director of the Middle East Insitute at the National University of Singapore told Al Jazeera.

“The question is what do you do with his followers including his son Ahmad. ... A heavy responsibility now falls on the vice president, who is nominally in charge, to see if he can … bring the various other players in the game to some kind of negotiating situation.”

The Saudis, who have a 1,100-mile border with Yemen, have long had a lot of influence with many different players in that country. They reportedly brokered a cease-fire between Salah’s forces and the Al Ahmar tribe on Friday after the attack that injured Saleh.

And in the months ahead, they are likely to be doing a lot more brokering in Yemen.

“What the Saudis want is some kind of stability in the region. They’re unaccustomed to initiating change but I think they’re really going to have to now,” said Hudson.

The seriousness of Saleh’s injuries is not clear, though most analysts say he would not have agreed to leave Yemen if not badly hurt.

Early Sunday the royal court of King Abdullah bin Abdul Aziz issued a statement saying that a Saudi medical team had traveled to Sanaa on Saturday to examine Saleh and had recommended he get treatment in Riyadh, a suggestion that Saleh accepted.