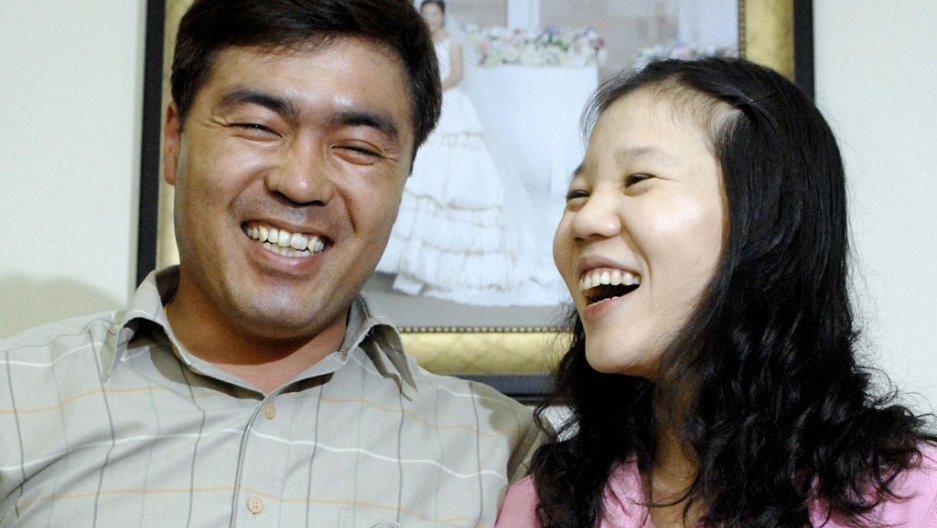 Kim Choong-Hwan (left), a 40-year-old South Korean truck driver, poses with his Vietnamese wife Ngo Ngoc Quy Hong, 21, by their wedding photo after an interview at their apartment in Osan, south of Seoul, May 3, 2007. A growing army of South Korean bachelors are turning to China, Vietnam, the Philippines, Mongolia, Thailand, Russia, Uzbekistan and other foreign countries for brides.
Credit: Jung Yeon-je
Share

SEOUL, South Korea — The murder would have been all the more horrifying had it been unprecedented.

On May 24, a South Korean man stabbed his Vietnamese wife to death while the couple’s 19-day-old baby lay next to her. The man, a farmer, had been matched up with his foreign bride through a broker.

These brutal acts highlight the ways — most less obvious and more everyday — in which South Korea is turning a blind eye to its rapidly changing demographics and the obstacles of integration.

For-profit marriage brokers operate without thorough oversight and the state agencies tasked with addressing the problem can't get their act together.

Or maybe they don't want to. South Korea is notoriously reluctant to accept migrants and change its identity as a homogenous culture.

The problem, of course, is that the migrants are already on their way.

South Korea is facing a growing number of foreign brides. On subway cars in South Korea, in between the ads for plastic surgery or English classes, brokerage agencies post wallet-sized cards that promise convenient marriages to kind women from nearby countries.

Nguyen Ngoc Cam arrived in South Korea from Vietnam as a foreign bride 13 years ago.

“It was very difficult at first. When I first arrived, I couldn't speak Korean at all and wasn't familiar with Korean culture,” Nguyen, 35, said in a recent interview in Gwanghwamun Square, the symbolic epicenter of Seoul.

She said the government offered no help. “I was left to rely on myself. The important thing was that I developed confidence over time.”

Ultimately, Nguyen adapted to life in Namyangju, a suburb east of Seoul, and learned to speak to her husband, a construction engineer. The couple has two children, ages 10 and 12.

More than 100,000 of the estimated 1.2 million foreigners residing in South Korea are foreign brides, according to the Korea Institute for Health and Social Affairs.

Vietnamese and Filipino women make up 19.5 and 6.6 percent of that population, respectively, according to a March 2010 survey by the Ministry for Health. Ethnic Koreans from China make up the largest portion at 30.4 percent, with Han Chinese at 27.3 percent.

But besides keeping a tally, government agencies have yet to make a significant impact in smoothing the transition. A lack of coordination among the three ministries — gender, education and health — responsible for assisting multiethnic families means it's hard to get anything done. (Case in point: None of the three ministries returned requests for comment for this story.)

Brokers do little to prepare the brides. Language and cultural issues aside, both men charged with murdering their Vietnamese wives had known histories of mental health issues that weren’t disclosed to their bride in advance.

At a memorial service outside the South Korean Ministry of Gender Equality on June 2, protesters carried placards that read “Brokers: do you see what you have done?”

But it isn't only the wives who suffer. Mixed families struggle economically and multiethnic children don't fare as well academically as fully Korean kids.

Also according to government stats, 80.8 percent of the children from multiethnic families aged 7 to 12 go to school. But only 26.5 percent make it to high school — far below average in a country that has one of the most educated societies in the world.

Kim Hee-kyung, director of advocacy for Save the Children Korea, argues that it isn’t just newcomers that need help assimiliating, but it is also full Koreans who need to learn how to welcome different cultures.

“We keep urging the government to focus more on the education of fully Korean children," said Kim.

"It is time to educate the majority of children, not just the minority. But the government’s policy focuses only on how to integrate this minority into Korean society; they don’t accept diversity.”

The crux of the problem is that South Korean society resists thinking of itself as anything other than a uniform culture.

“We need to discard the centuries-old concept of Korea as a homogeneous, monocultural sort of society and accept that we are becoming more diverse,” said Lee Chan-boum of the Presidential Council on Nation Branding, a government body that promotes South Korea’s image internationally.

Koreans commonly believe, and are taught in school, that their people have populated the peninsula from time immemorial and have withstood colonial occupation and other forms of outside interference with their uniquely pure culture intact.

Brian Myers, Director of International Studies at Dongseo University in Busan, argues in his work, "The Cleanest Race," that it wasn’t until the arrival of the Japanese in the late 19th century that a uniquely Korean identity began to be formed in both emulation of and opposition to the colonial presence. Contact with Chinese and Japanese invaders created a mixed bloodline.

At present, there are no government programs to educate full South Koreans on accepting different cultures, which Kim of Save the Children says is the logical next step.

“Usually mixed children don’t recognize that they’re different; they are categorized as being different. The government only urges children to learn Korean, not Vietnamese. Through this, the children start to think that Vietnamese is inferior to Korean," Kim said. "They then start to hate everything from Vietnam."