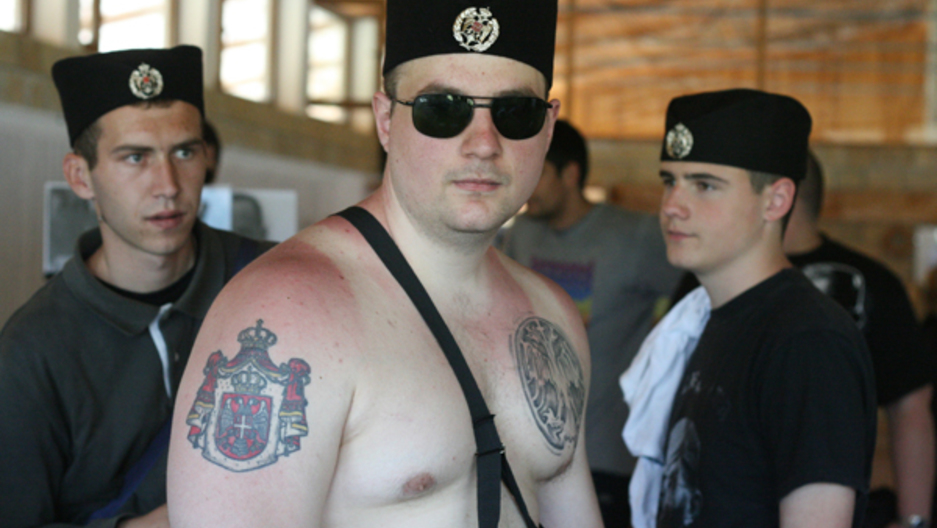 By Nate Tabak Ravna Gora sprawls across Serbia's heartland. On the high ground of the rugged terrain, you can see for miles in every direction. Below, deep valleys and caves offer countless places to hide. It's the perfect location to wage a guerilla war. 70 years ago, a resistance group formed here after Nazi forces occupied what was then the Kingdom of Yugoslavia. The fighters called themselves Chetniks and swore allegiance to the exiled king. They initially fought the Nazis, but at times cooperated with them, in order to battle the communists to restore their king. This place hasn't seen armed conflict since the Second World War. But as I retrace the steps of Serbian fighters who assembled here decades ago, their legacy isn't hard to find. The Chetnik movement has become a rallying point for Serbian ultranationalists. Every year, some of them travel to Ravna Gora to celebrate the birthplace of the Chetnik. My guide, Srdjan, pointed out a monument to Draza Mihailovic, the man who founded the Ravna Gora Movement of Chetniks in May 1941. The Chetniks ultimately lost, and the victorious communists executed Mihailovic in 1946. Now he's a martyr for Serbian ultranationalists. Srdjan's cousin, Ivan, who also came here for the annual pilgrimage, paused to pay his respects at a small memorial for Mihailovic. "Mihailovic is our symbol," said Ivan, who added that being here means a lot to him. Both Ivan and Srdjan wore camouflage fatigues from their stints in the Serbian army. Down the hill from the memorial, the pilgrimage took on a carnival-like atmosphere. Vendors hawked commemorative clothing and trinkets, whole lambs and pigs roasted on spits; copious amounts of beer and sljivovica — or plum brandy — flowed; and hoards of uniformed men sang and danced in various states of intoxication. It's here that I ran into convicted war criminal Miodrag Jokic. The former Yugoslav Navy Admiral spent five years in prison for his role in the siege of Dubrovnik in 1991 and 1992. He's among compatriots here. "This is real Serbia, what you can see here, you know, is hardcore Serbia," he said, speaking through a translator. Many of the Chetniks here subscribe to an extreme form of nationalism that envisions a larger, ethnically pure Serbia. More than a few sported shirts picturing Ratko Mladic — the Bosnian Serb military leader who's just been extradited to The Hague. I came here not long before Mladic's capture. It's safe to assume most of these ultranationalists weren't happy about it. Many of them feel increasingly marginalized by their own government. That's something Deja Milosevic told me after he physically interrupted another interview at a Chetnik photo exhibit. He has disdain for the current Serbian government. The shirtless Chetnik proudly pointed to the Serbian coat of arms tattooed to his bicep. "I want be Chetnik because it's honor," he said. There's a lot of anger and resentment among Chetniks these days. It's not just the arrest of Mladic. They're also angry at the United States. They haven't forgotten the US-led NATO bombing of Serbia during the Kosovo war in 1999. One man grabbed my microphone after learning that I'm American. He launched into a tirade about US foreign policy. He later tried to attack me with a large knife. He wanted me to answer for the bombing of Serbia, and more recently, Libya. A few days later, the man got a message to me: He apologized, saying he was drunk and thought I was an American spy. Then he invited me to come back next year, promising to treat me as a welcomed guest.