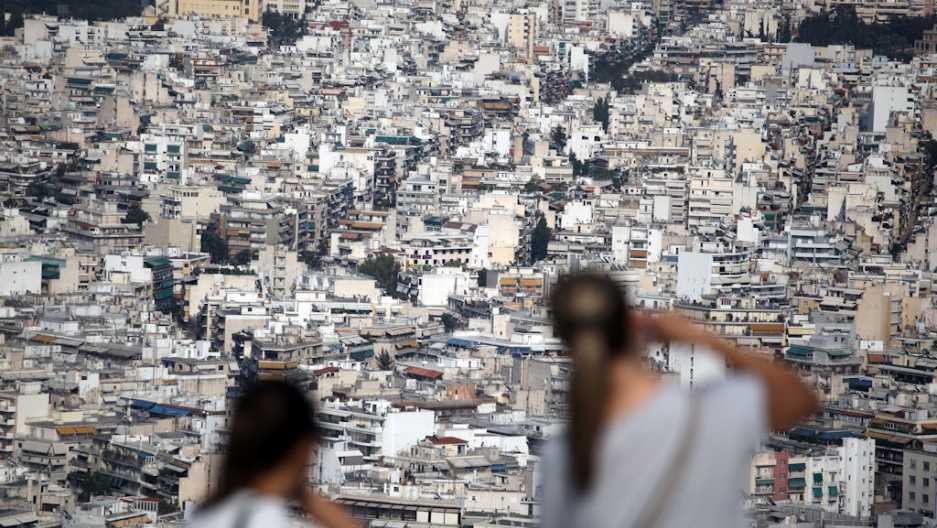 ATHENS, Greece — It has come down to this: sell or sink.

A year after averting default with the help of a $146 billion lifeline from the European Union and the International Monetary Fund, Greece has failed to raise a single cent from plans to sell off state companies and public property.

Now, and as the country’s finances fail further, its frustrated lenders look poised to pull the plug on a $15 billion loan installment due later this month unless a fire sale of Greek state assets gets underway.

“It’s serious,” said Finance Minister George Papaconstantinou. If the loan installment doesn’t clear, he told a television interview last week, “then the shutters of the country will come down; the country will stop paying pensions, salaries and its other expenses.”

(Friday Greece announced that an EU-IMF review of its progress concluded "positively.")

The threat has officials in Athens scrambling to unload everything from state stakes in phone companies to luxury resorts and shipping ports by 2015, shaving some $70 billion off Greece’s $470 billion debt.

Already this week, Athens moved to shed a 10 percent holding in OTE, the telecommunications company, to German telecommunications giant Deutsche Telekom. Next in line are chunky stakes in the country’s Public Power Corporation, Hellenic Postbank and port authorities in Greece’s two major ports, Pireaus and Thessaloniki.

Details on the timing for the privatization program remain sketchy. But organizers say the plan should buy the Athens government time while deeper and more draconian reforms aimed at making the country more competitive take effect.

Whatever the intentions, Greece’s sell-off bonanza might prove too ambitious, too late.

“A lot of time has been lost,” said Yannis Stournaras, lead economist with the Athens-based Foundation for Economic and Industrial Research. “These steps should have been taken much earlier and most importantly at the government’s own will.”

That they weren’t, critics say, suggest government incompetence and lack of political will.

One of the greatest functions of Greek politics for the past three decades has been to provide a network for favor-swapping and patronage. The socialist PASOK party, in fact, nurtured that culture of clientelism for much of its 17-year hold on power between 1981 and 2004. Andreas Papandreou, PASOK’s charismatic founder, had an instinctive sense for Greek people’s collective gripes. And as he wooed worshiping crowds by laying blame on foreign powers, he moved to build a massive power base by stuffing state services with a phalanx of political — at times doltish — hires. Union leaders were also shielded, empowered and brought well within PASOK’s political fold.

It was a vote-winning recipe and successive governments, including conservatives, practiced it for decades.

While many modern politicians now claim that Greece’s culture of clientelism has waned — Prime Minister George Papandreou, the sober-minded antithesis of his father, surged to power late 2009 promising to re-invent the Greek state by making a break from such age-old practices — it still remains the biggest thorn in the side of government’s privatization plan.

“It’s an enormous task,” said Yannos Papantoniou, a former Socialist finance minister. “The privatizations can happen,” he quipped, ‘but it requires enormous political skill on Papandreou’s behalf ... . He has to deconstruct what PASOK was built on.”

Indeed, news of the privatization plan sent thousands of unsackable public sector employees onto the streets of Athens this week, waging work stoppages and erecting road blockades in protest of the sell-off. Public power corporation union leaders also have warned of political reprisals, unnerving old-guard socialist lawmakers who have kicked up a storm of dissent in the party, fearing the loss of PASOK’s powerful electoral base.

“This is the deep PASOK — bucking and balking from the innards of the system at change,” said Stournaras. “If it wins, then Greece is bust. If it doesn’t — and it shouldn’t — then Greece has a good chance at fixing its finances."

To be sure, EU and IMF officials have said that any infusion of additional rescue funds — as much as $94 billion — to Greece could involve an additional wave of austerity measures, plus unprecedented external supervision of the country’s privatization program.

Even so, international investors remain skittish. Company stakes at depressed market rates may sounding appealing, but not when they are attached to a maze of legal and regulatory hitches, market officials concede.

“Who in his right mind,” roared former Finance Minister Stefanos Manos, “is willing to sink millions into a company and not be unable to manage it effectively because of striking union leaders and labor regulations limiting the ability to fire redundant staff?”

True. On Wednesday, Deutche Telekom, already the owner of 30 percent of the ex-Greek communications monopoly, hinted at such concerns, saying that while it was open to negotiations on expanding its control of the company it remained cautious. “We must now enter talks,” said Chief Executive Rene Obermann, “and take a sober look at what conditions are possible.”