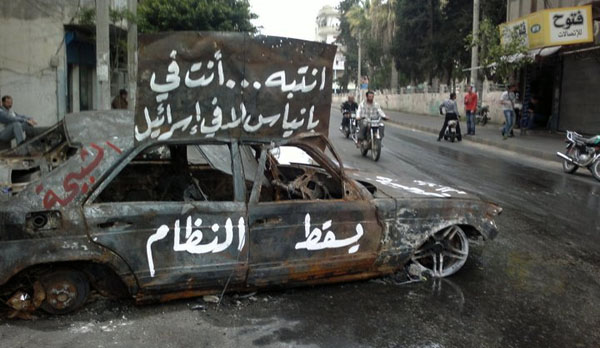 A sign over a burned car says: "Caution! You are in Baniyas, not in Israel." Another says: "Down with the regime." (Photo: syriana2011)

Share
On a screen in a downtown Washington DC hotel ballroom, a man is cradling his dead son. The man is anonymous, somewhere in Syria, and his message is being heard by a room full of Syrian human rights activists. "This guy who wasn't carrying anything harmful in his hands but he was hit by two shots," the man in the video declared. "I went to help him. I went to help him and they came and attacked me with sticks." Individuals and groups inside Syria have been smuggling messages and videos to the outside world this way since before the current uprising there began. Ahed al Hindi used to be one of them. "I grew up as many other Syrian young people learning that Assad is the best, that we are so lucky, so fortunate to be born in a country that is headed by Assad," al Hindi said. Al Hindi sits in a library in Rockville Maryland, far from his homeland. "In 2003, 2004 when we start to get Internet, we start to get satellite channels we got other sources of information. So I started to have this kind of conscience," al Hindi said. "The country is not the best in the world. The turning point was 2006 when eight of my friends were jailed simply for creating a secular group at the campus of Damascus University." Al Hindi started a group in Damascus that documented and publicized abuses targeting students and young people. And soon he himself was arrested, beaten, and kept in total darkness in a cell barely larger than his body for weeks. So he left the country. Cyber Dissidence And now he works with Cyberdissidence.org, surreptitiously connecting bloggers and dissidents inside Syria to the outside world. Human Rights abuses inside Syria have been the norm for decades. But human rights advocacy inside Syria really got a jump start when Bashar's father, Hafez al Assad, died in 2000, what is known today as Damascus spring. Louay Safi, a fellow at Georgetown University and chairman of the Syrian American Council, said there was a real feeling that Syria would open up after Bashar Assad took over. "People had a lot of hope because he used very democratic language during his inaugural speech, and people took that to heart and started to engage in more open debate and demand more constitutional changes," Safi said. But after a year of allowing that to go on, there was a crackdown and activists were jailed." Prominent human rights activists are often former leftist opposition figures, others are lawyers or economists. Or, like Radwan Ziadeh, scholars. He discovered what human rights were by reading about them. As the Damascus Spring turned to winter, he continued documenting the excesses of the police state. "Most of the monitoring and advocacy work done inside Syria (is done) because this is the only way to have a dignity and freedom for our country," Ziadeh said. "The human rights is not only a concept in the books, it should actually be a reality on the ground." Human Rights activism Ziadeh and several other prominent activists and groups demanded more openness, earning another round of arrests. But in 2005 they really crossed a line. They demanded better relations between Syria and Lebanon at a time when Syria was being accused of assassinating former Lebanese Prime Minister Rafik Hariri. "They withdraw my passport for a few years. And when I left Syria in 2007 the government issued arrest warrant for me, I cannot go back to Syria," he said. "And they banned my mother my sister from leaving the whole country." But Ziadeh got off comparatively easy. Other colleagues remain in prison. By some accounts, the number of groups inside Syria shrunk from nine to two after that, says activist Ahed al Hindi. "Most of the group are undercover, they do underground work, they go interview people who were abused secretly, it's not a healthy environment," al Hindi said. Since January, the traditional rights groups have been supplemented by an explosion of individual activists; people with cell phones, students with Skype. The lawyers and intellectuals are still there, many in hiding right now, but they're getting help from a lot of other regular folks. "I see a different culture there, to be honest with you. This is a new culture, a commitment to civil disobedience despite all the costs they are paying," Louay Safi said. Human Rights activism it seems has gone viral.