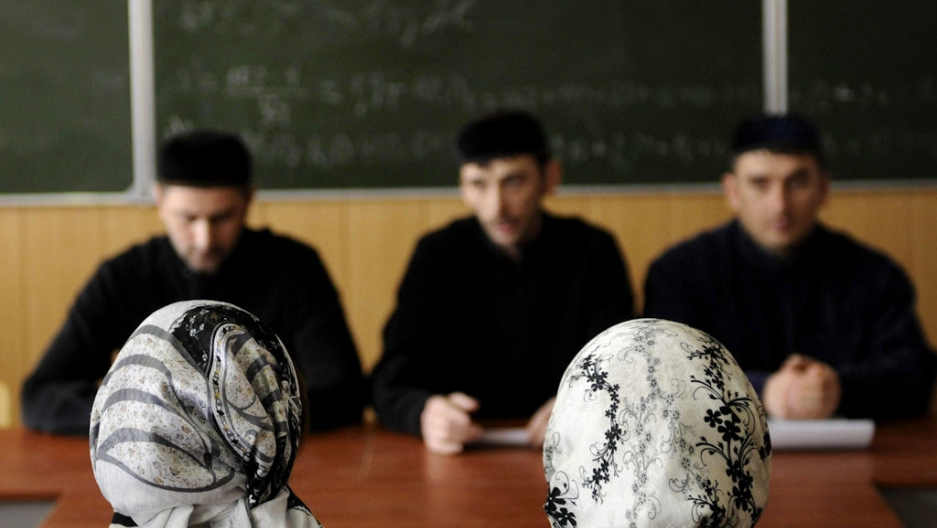 She wanted to drive wherever she needed to go — to shop, to work, to see a friend. “I was tired of exploiting my husband,” is how the 66-year-old put it.

In most parts of Russia, that would be no big deal. But Bazaeva lives in Chechnya.

“People look at me on the road,” she said. “Sometimes when I drive home, the kids in the street scream, ‘Look! Grandma’s at the wheel!’”

Twenty years after the fall of the Soviet Union, Chechnya has reverted to a deeply traditional culture, reinforced by the flight of ethnic Russians as the southern republic devolved into separatist war in the mid-1990s. Today, the government of Kremlin-backed Ramzan Kadyrov maintains a fragile piece as it fights the remaining Islamic rebels.

Meanwhile, traditional values are becoming more entrenched as Kadyrov seeks to become, as local activists put it, “more Islamic than the Islamists.” The main targets? Women.

Chechnya has not reached the level of restrictions seen in Saudi Arabia, where a Saudi woman has recently launched a movement urging other women to defy the kingdom’s female driving ban. Chechnya does not restrict through legislation.

That standard is set, like everything else in Chechnya, by Kadyrov, who runs the republic as though everyone in it were his loyal subject. One of his first public statements upon being named prime minister in 2006 (he was named president the following year) was “encouraging” women to cover their hair. Today, stories abound of women fired from their jobs for failing to appear at work in a headscarf.

The struggle then went to the streets of Grozny, where it still is as common to see a woman without a headscarf (or with a small symbolic headband) as it is to see those with covered heads.

For several weeks last summer, men in cars with no license plates — the calling card of the kadyrovsty, former Chechen rebels loyal to Kadyrov — drove around town shooting paintballs at women who weren't wearing headscarves. A video of some of the attacks made it on to YouTube.

Kadyrov’s spokesman put that attack down to “hooligans” and said it was the only one that happened, accusing Western journalists of exaggerating the number of attacks in order to discredit Chechnya.

After speaking with three human rights activists in Chechnya, this reporter heard in-depth stories of at least seven incidents that were said to have happened over the span of several weeks, with the activists estimating that dozens had taken place.

There will probably never be confirmation of who issued the order for the attacks, but Kadyrov certainly supported the campaign. “I don’t know [who they are], but when I find them, I will announce my gratitude,” he told local television last July. “Even if they were carried out with my permission, I wouldn’t be ashamed of it.”

In a report on the enforcement of Islamic dress in Chechnya published in March, Human Rights Watch wrote: “The paintball attacks came several years into a quasi-official, though extra-legal ‘virtue campaign’ in Chechnya.”

Kadyrov has also expressed support for honor killings. After seven women’s bodies were found by the side of the road two years ago, he said they probably had “loose morals.” “If a woman runs around and if a man runs around with her, both of them are killed.”

The latest part in the “virtue campaign,” according to several women and activists in Chechnya, is state-aligned muftis standing on street corners, shouting advice at women about dress and behavior.

It has become almost trite to say that Kadyrov has brought a veneer of peace to Chechnya, a small republic ravaged by two ruthless wars since the fall of the Soviet Union as Moscow put down a separatist rebellion. But scratch beneath the surface of Grozny’s sidewalk cafes and shiny new buildings, and the fear is constant.

“I have never felt comfortable or at peace here,” said Zarema Magazieva, who works in the Grozny branch of Russian human rights group Memorial. She, like many Chechen women, walks a fine line between adhering to tradition and being forced to obey Kadyrov’s rules. On the one hand, she abides by strict family code that a man’s family has total say over children — when her brother disappeared, like thousands of Chechen men, in the early 2000s, his child came to live with her family, depriving his wife of custody, according to tradition. At the same time, she fears the state’s reaction to what should be a personal choice.

“Once I saw two girls on the minibus without a headscarf,” she recounted. “On the one hand, I understand them, I think it’s great they do what they want. On the other hand, I’m scared for them.”

Meanwhile, Bazaeva is staging her own mini-revolution. She has practice, having helped organize the first protests in Chechnya as Russia’s bloody crackdown began in the mid-1990s. Last year, her organization, Women’s Dignity, helped 26 women get drivers’ licenses.

“It’s a step toward equality,” she said. “Little by little, women are breaking the barriers.”

“During Soviet times, some Chechen women broke patriarchal stereotypes,” she said, recalling a famous pilot and poet and, even, at least one woman who drove. “But this process is backsliding.”

It’s a slide encouraged by Kadyrov, who plays up a strict adherence to Islam, despite widespread tales of partying and corruption, as he battles the remnants of an Islamic insurgency.

“He’s trying to be, as the saying goes, ‘more radical than the people,’ stricter than the radicals in these questions,” one activist said. The most visible way of doing that is by showing that women are under control.