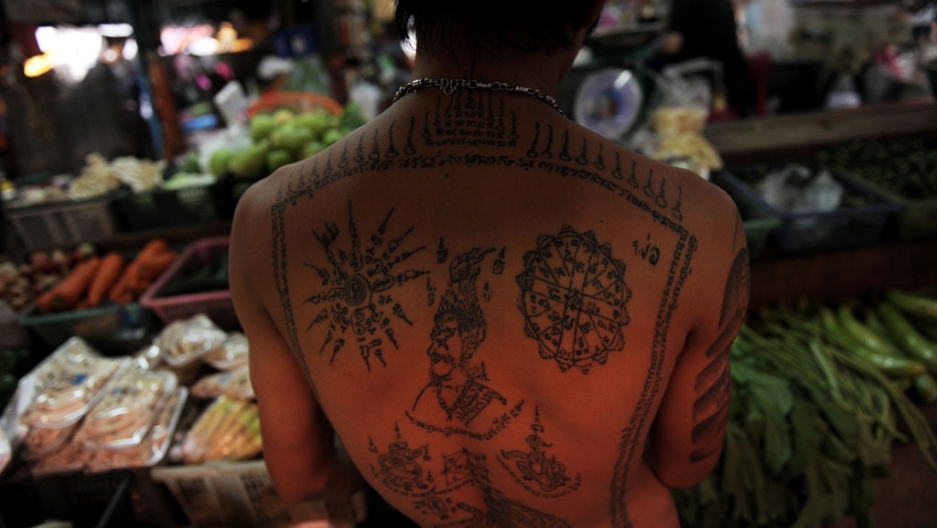 A Thai stall employee with a tattooed back arranges vegetables at a market in downtown Bangkok on March 9, 2011.
Credit: Christophe Archambault
Share

If you or someone you know has ever gone out in Bangkok and come back tattooed, this post may be for you.

The Thai Culture Ministry is pondering a ban on foreigners getting religious tattoos, especially in the key cities of Bangkok and Chiang Mai.

Culture Minister Nipit Intarasombat said that an uncomfortably high number of foreigners are interested in tattoos with sacred Buddhist and Hindu images, according to a new survey on the island of Phuket, another tourist spot.

"Some of the tourists deem religious tattoo patterns a fashion without any religious respect while some probably have those tattoos because of ignorance," reports the National News Bureau of Thailand.

The ban is yet to be official, but in the meantime, provincial governors have been asked to "inspect" tattoo studios, seeking their cooperation in not using sacred religious objects in the tattoo process.

Here's a closer look at religious tattoos in Thailand (below) and in neighboring Cambodia, where soldiers have gone so far as to use the ink as armor.

A Thai stall employee with a tattooed back arranges vegetables at a market in downtown Bangkok on March 9, 2011. (Christophe Archambault/AFP/Getty Images)

A Thai Buddhist artist draws a traditional tattoo on the chest of a devotee, during a tattoo festival at the Bang Phra Temple in Nakhon Chaisi, west of Bangkok on March 7, 2009. (Christophe Archambault/AFP/Getty Images)

A Thai Buddhist devotee gets a tattoo that he believes will protect him from harm. (Christophe Archambault/AFP/Getty Images)

Some men take on the characteristics of sacred animals that have been carved onto their skin. (Paula Bronstein/Getty Images)

In Thai culture the tattoo or Thai word 'sak yant' is worn as a symbol of spiritual and physical protection, as many believe that the tattoo has mystical powers. (Paula Bronstein/Getty Images)

A Thai tattoo master, Whaw Hongsakul, carves a tattoo on a devotee's back as volunteers hold the woman's back steady. (Paula Bronstein/Getty Images)