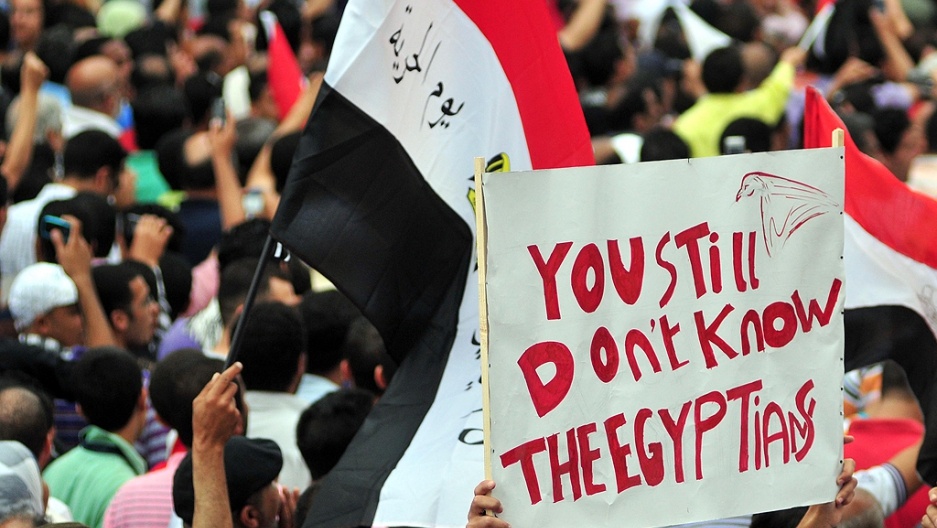 Egyptians wave their national flags as they crowd the streets of Alexandria on May 27, 2011, during nationwide protests against the ruling military council's handling of the post-revolt phase.
Credit: -
Share

A general in Egypt's military admitted that soldiers carried out forced virginity tests on female detainees arrested at a protest earlier this year, according to a new report.

Egypt's military-led interim government, which has ruled the country since the February 11 ouster of former president Hosni Mubarak, had previously denied several accusations - including this report by Amnesty International - that at least 18 females arrested near Tahrir Square on March 9 were subjected to any torture, sexual or otherwise.

The senior officer, however, both acknowledged and justified the "virginity checks" to CNN.

"The girls who were detained were not like your daughter or mine," the general told CNN, on the condition of anonymity. "These were girls who had camped out in tents with male protesters in Tahrir Square, and we found in the tents Molotov cocktails and (drugs)."

The admission by the officer, which set off a storm of outrage among Egyptian youth activists, revolutionaries, and bloggers, is the latest in a series of setbacks for the interim government, which is run by the Supreme Council of the Armed Forces.

Many Egyptians are increasingly distrustful of their military leaders, who have struggled to answer the growing demands of protesters on the street amid a worsening economy and seemingly increasing sectarian divide.

Clashes between Christians and Salafi Muslims in the working class Imbaba district of Cairo earlier this month left at least 10 people dead and scores injured.

Last week, tens of thousands of Egyptians demonstrated in Cairo's Tahrir Square in an effort to "save the revolution" and demand swifter reforms by the Supreme Council of the Armed Forces.

More than 100 protesters demonstrated outside a military prosecutor’s office on Tuesday, after a television journalist and prominent activist were called in for questioning by the Supreme Council of the Armed Forces following a talk-show appearance that was critical of Egypt's army.