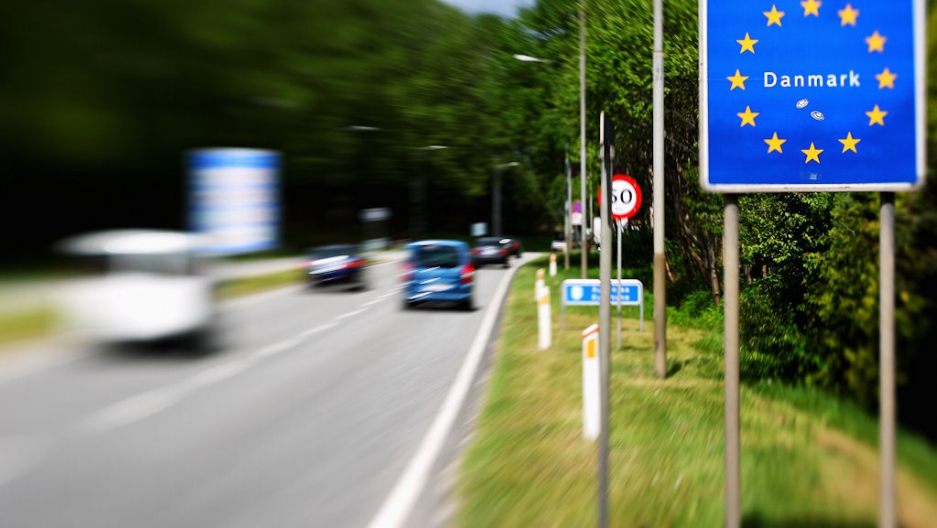 Cars pass the German-Danish border on May 13, 2011 near Flensburg, Germany. Both Germany and Denmark are part of the Schengen zone, where countries have pledged to allow people and goods to move freely.
Credit: Joern Pollex
Share

BRUSSELS, Belgium — The Schengen Treaty provides one of the most beloved benefits of the European Union, allowing both Europeans and visitors to travel between 25 countries without stopping at passport control. Now it is under threat from within its own borders.

What began as a tense battle between Italy and France after Italian authorities gave Tunisian migrants papers that allowed them to travel within the Schengen area, has become a full-blown crisis and has spread, as more member states share wide-ranging concerns about who can enter their territory. It has revealed serious weaknesses in one of the pillars of the EU’s identity ― trust between neighbors.

EU Justice and Home Affairs Commissioner Cecilia Malmstrom is among the most ardent supporters of Schengen which makes travel between 22 of the 27 EU countries plus Iceland, Norway and Switzerland largely free of passport checks and other document hassles. Malmstrom praises it as “beautiful achievement for the mobility of the people of the European Union … a gift to the citizens.” But, under pressure from both Schengen fans and foes, she has acknowledged that there needs to be a way to assuage the concerns of both sides.

Malmstrom announced a package of reforms this week passed by the European Commission (the EU’s executive branch) that aims to better handle large influxes of people such as the Tunisians and Libyans who recently arrived in Italy and Malta, as well as anyone else who might try to abuse the system. She said this can be achieved with a “safeguard clause for exceptional and very strict circumstances” under which member states could re-establish visa requirements for third-country nationals inside the Schengen zone.

There are currently 41 countries that have visa-free relationships with the EU, giving their citizens access to Schengen privileges. Malmstrom insisted the safeguard clause is not “aimed at any specific country,” but used as an example the challenge several EU governments have in dealing with huge numbers of visa-free travelers from the western Balkans. After visa liberalization in 2009, tens of thousands of, in particular, Serbians and Macedonians arrived in EU countries with no intention of ever going back home, clogging up the asylum system. Some EU members insisted on a clause that would allow visa reintroduction before they agreed to add Albania and Bosnia to the visa-waiver list in December.

What Malmstrom did not address in her proposals ― which will be further discussed by justice ministers in early June before going to heads of state at the end of the month ― is a long-term resolution to the type of ugly mess between France and Italy that provoked to the acrimonious re-examination of Schengen.

When fellow EU member states failed to respond to Italy’s repeated complaints about having to handle some 30,000 migrants from Tunisia, Libya and Egypt who fled to Italy’s Lampedusa island, Rome played a card that stunned its neighbors. It issued temporary residence permits to a reported 22,000 Tunisians, prompting trainloads to head toward France. Furious, French President Nicolas Sarkozy invoked a clause in the Schengen agreement allowing ad-hoc border checks for a limited period of time under exceptional circumstances. Border guards stopped trains coming from Italy and demanded that travelers present more than just a temporary Italian residence permit, as well demonstrate the means to support themselves inside of France.

Other countries also responded harshly to the Italian move, both against the Italian government and the migrants. The Dutch government ordered any Tunisian who had arrived under what Prime Minister Mark Rutte called the “Berlusconi arrangement” to leave. Austria and Germany threatened to follow France’s border closures. The European Commission floundered on the issue, initially criticizing the French actions, but later backtracking and informing Italy that the permits it issued the north Africans did not automatically qualify them for Schengen travel.

A late-April crisis meeting between Sarkozy and Italian President Silvio Berlusconi largely smoothed over their bilateral spat, but it threw Schengen into dispute. In a joint letter, the two demanded that large influxes of migrants should be enough to invoke the right to border controls. It left the Schengen treaty, and the EU image, in tatters.

British MEP Timothy Kirkhope says the problem is that the door has been too open for too long. Kirkhope, whose country is not a Schengen member, said Schengen was intended to dismantle internal borders while external ones were strengthened. But the EU has failed to prevent migrants from making it through the external borders. That has led to “undesirable” people moving between EU countries, people who “provide an extra terrorist threat, an extra major criminality threat to Europe.”

“Consequently you cannot be surprised if countries like France and other individual countries that are part of the Schengen agreement now say ‘hang on a minute, that part of the deal is not being performed,” Kirkhope said. “We therefore have the right to reimpose border controls if we think it’s necessary for our own security.’”

Denmark has since announced it too is setting up border controls. Whether or not EU officials were “surprised,” they were not pleased. Malmstrom and European Commission President Jose Manuel Barroso fired off letters to Copenhagen reminding it of its Schengen obligations, but the Danish government says the checks are to combat crime and therefore compliant.

But members of the European Parliament (EP) are incensed by the attacks on Schengen. In a recent debate, Belgian Guy Verhofstadt, president of the group for Liberals and Democrats, called the situation a “shame,” blasting France and Italy for acting as if “Europe suddenly did not exist anymore.” “Let’s be very open about this,” Verhofstadt raged on the parliament floor, “it was a ping-pong game by two governments, by Berlusconi and Sarkozy on the back of refugees who were in fact in trouble.”

Amnesty International agrees. Annaliese Baldaccini, a migration expert with the human rights organization, says the debate about internal EU mobility is a distraction from the needs of the vulnerable people who sparked it. Ministers have met on the topic several times, Baldaccini pointed out, but “all the responses have been inward-looking, trying to protect themselves from arrivals.”

“It’s an overreaction and playing to the political gallery,” she said, suggesting that instead “they should try to prevent people from drowning.”

EP Green Group co-president Daniel Cohn-Bendit threw out even sharper accusations, comparing the situation with ships of Jews being turned away from ports in World War II.

And solidarity, as Cecilia Malmstrom’s struggles illustrate, is a tough thing to legislate.