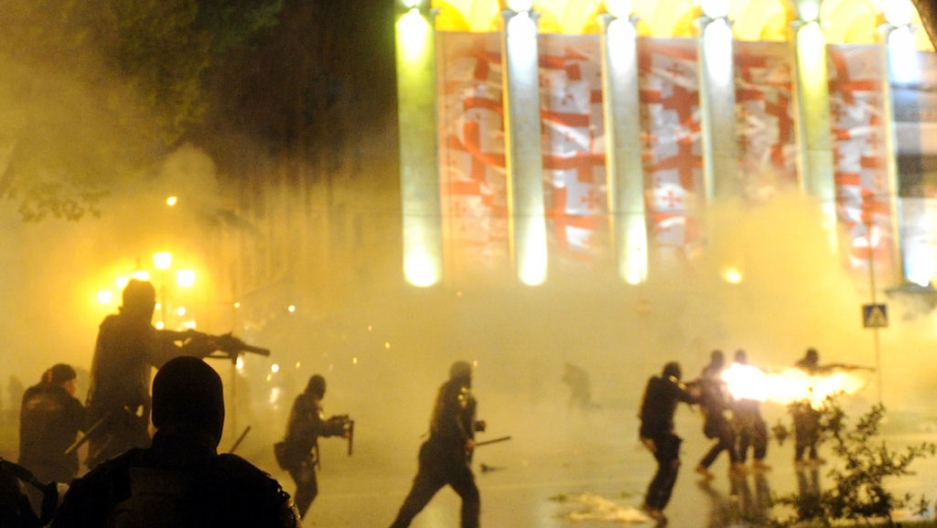 Georgian riot police officers attack protesters while dispersing an opposition rally in front of the parliament in Tbilisi late on May 25, 2011.
Credit: Vano Shlamov
Share

TBILISI, Georgia — In the wee hours this morning, in heavy rain, Georgian riot police closed in on a crowd of protesters who had appropriated a bandstand in front of parliament — the spot where the president was to speak just hours later.

It was the deadly end to a five-day protest led by two Georgian opposition parties demanding the resignation of President Mikheil Saakashvili. At its peak, an estimated 10,000 people took part in the protests, which blocked a major thoroughfare in front of the headquarters for Georgian State TV in the capital, Tbilisi. On Wednesday, about 3,000 demonstrators marched on to the bandstand, where they hoped to disrupt the annual Georgian Independence Day parade.

The opposition parties claimed they were marching for democracy. The government said they were Russia-backed provocateurs bent on sewing disorder. Both positions miss the point.

As footage of the protest’s violent dispersal trickled out, it became clear that the majority of those who had taken to the streets were not young radicals, but middle-aged workers and retirees, huddled together gasping for air through the tear gas and rain, frantically avoiding the swinging billy clubs and rubber bullets. A protester was reportedly killed in the violence while 37 people were wounded.

Reports also say the motorcade of former Parliamentary Speaker Nino Bujanadze, the protest’s primary architect, crushed a policeman to death as Bujanadze fled the violence. But this scandal also misses the point.

Rather, what today's events make clear is that Georgian society suffers from a deepening rift eight years after its peaceful Rose Revolution swept Western-minded reformers to power. Although Saakashvili’s administration has received rave reviews from Western countries over his surprisingly effective anti-corruption and market-liberalization reforms, local analysts say that Georgia’s strengthening economy and reforming public institutions have left many Georgians behind.

This week’s protests were labeled the "Silver Revolution” as the majority of protesters were in their 50s or older. The protesters, mostly Soviet-educated Georgians, speak Russian, not English. They were used to a dependable job market and a generous pension in Soviet days. The new Georgia seems to have no place for them.

According to World Bank data, 55 percent of Georgians live below the poverty line. Koba Turmanidze, Georgia country director for the Caucasus Research Resource Council, said that in council research the 50-and-older age group consistently comes up “poorer and less employed" than the rest.

The pensions the elderly receive are less than half of the Georgian government’s own figure for the official minimum subsistence level, which for a family of four is 223 lari ($133) per month — a figure Turmanidze called “ridiculously low.”

Furthermore, the old Soviet industries are now gone, and jobs in growing sectors of the Georgian economy such as tourism, NGOs and international business all require modern skills, a Western work ethic and English fluency, especially since Russia imposed a trade embargo on Georgia in 2006.

Plus, Turmanidze said, there is a structural discrimination in the “new Georgia” against those from the past generation.

“The perception that the government is promoting is that this is a useless generation,” he said. “People now associate the older generation with the 90s and before, when there was lots of corruption, when the country was a failed state. They’d rather hire someone younger, even if they’re less qualified.”

Saakashvili’s own government exemplifies this trend. Of 20 cabinet-level ministers, only six are over the age of 38. Georgian Minister of Economic Development Vera Kobalia is 29.

Nearly every second car on Tbilisi’s streets is an independent taxi. Riders negotiate fares in advance with the drivers, who are mostly middle aged, with college educations. Because of the saturated market, the standard fare to cross this city of 1.5 million is 5 lari ($3) — barely covering the price of gasoline.

In a recent poll by the National Democratic Institute, 37 percent of respondents across Georgia said they were worse off than the previous year. Compared to 2008, 91 percent said that rising prices had become a greater concern. A majority of respondents said the employment situation had gotten worse.

Turmanidze said that these are the chief concerns for the older generation, for whom “every lari counts” already. Now, they are beginning to feel cornered.

“Frankly these protests are not surprising at all. We expected that the older generation would be the most likely to protest, and I don’t see their situation getting better,” he said.

Human Rights Watch, Transparency International Georgia and the Georgian Young Lawyers Association have all denounced the police methods as “excessive” and “disproportionate” and have called for an investigation into the protest dispersal, during which nearly a dozen journalists were also attacked by riot police.

Speaking before the military parade began today, Saakashvili called for a moment of silence for the two people who were killed mere feet from where he was standing less than 12 hours earlier.

He then declared, “These people, these political leaders with their small groups wanted to raise a hand on the Georgian democracy. Instead of wanting freedom of speech, they in fact want violence.”

Editor's note: This story was updated to correct a title.