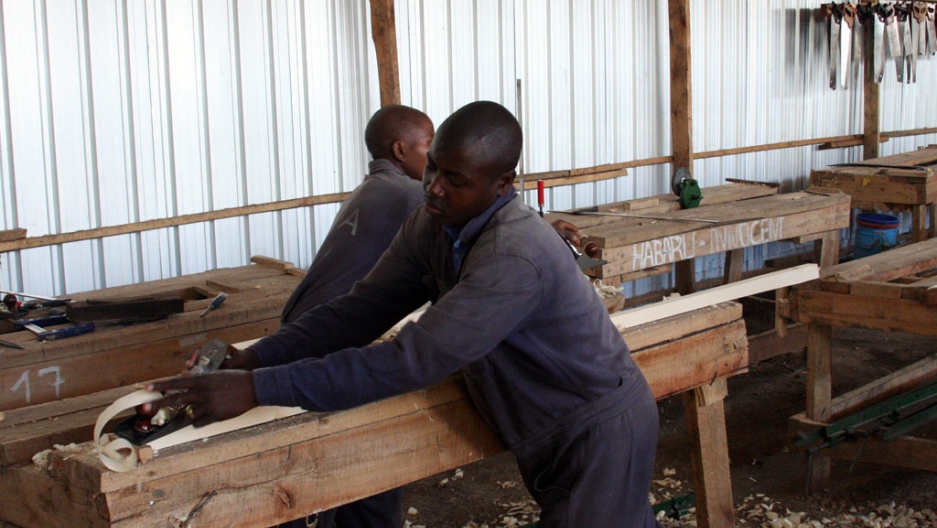 GISENYI, Rwanda — Rwanda's controversial Iwawa Island reform school failed to improve its image when a graduation ended in the deaths of six guests.

At the end of a festive graduation last week, the six people were killed when their boat was struck by a military vessel on Lake Kivu, minutes before returning to the mainland.

The accident, which occurred on May 18 well after dark at around 8:30 p.m., followed the first graduation ceremony of the Iwawa Rehabilitation and Vocational Skills Development Center, on a remote island more than 20 miles offshore from Gisenyi, the capital of Rwanda’s Western province.

The school has garnered something of a controversial reputation since the students — former drug addicts, street children and petty criminals — are usually taken there against their will and largely isolated once on the island.

While deaths on Lake Kivu are common — last month more than 100 people drowned when an overloaded vessel capsized after setting off from neighboring Congo — the circumstances of this fatal accident are particularly striking.

Earlier in the day, a class of 752 graduates marked the end of more than a year on Iwawa in a ceremony attended by hundreds of friends, family, journalists, foreign ambassadors and government officials. Throughout the morning, visitors were paraded about the island as students demonstrated skills they have learned such as carpentry, masonry, tailoring, beekeeping and commercial farming.

Most guests, including VIPs and journalists, returned to Gisenyi before nightfall — traveling in a motley fleet ranging from sleek military speedboats to puttering wooden vessels hardly fit for service on Kivu, one of Africa’s seven Great Lakes.

Yet many family members of graduates, most of whom hadn’t seen their sons or brothers in a year, stayed behind as darkness approached and other boats were summoned to fetch them. The boat that was in the accident was one of the slowest in the fleet, departing with 43 passengers around 5:30 p.m., one hour before dusk and three hours before the accident.

The passenger boat had no lights, according to Eric Maniraguha, a survivor who was carrying sound equipment to the mainland.

“It was clear the other boat did not see us,” he told GlobalPost. “It was going so fast it sliced our boat in two. Some people were literally cut in half.”

For an event that was organized, in part, to diffuse criticism of the Iwawa center, the deadly end was frustrating for President Paul Kagame's government.

Iwawa, after being featured in a highly critical New York Times article last April, came to symbolize the mounting international view of Rwanda as an orderly but repressive nation, one bent on economic transformation but unwilling to tolerate dissent.

This image was reinforced by the campaign for the country’s presidential election last August, in which a critical journalist and opposition politician were found murdered, a prominent dissident shot in exile, and several opposition parties prevented from contesting the poll. In the eyes of many critics, those events besmirched the victory of Kagame, the incumbent, who won in a 93 percent landslide.

In his article, Times East Africa bureau chief Jeffrey Gettleman portrayed Iwawa as a Rwandan Alcatraz: an island of no return where young men were carted without the knowledge of their families for offenses as minor as loitering. Though government officials claim all students are over 18, the story featured a 14-year-old boy who pleaded with Gettleman to call his father.

The Iwawa seen on Wednesday, spruced up for the occasion, was a markedly different spectacle — one of smiling pupils in smart dress and graduation sashes, who slept in tidy bunks with mosquito nets and watched movies or practiced martial arts in their free time.

Though few students came to Iwawa by choice, most interviewed by GlobalPost admitted they valued the experience gained on the island.

“I was just an idler, doing drugs, doing nothing productive,” said Ivan Mugisha, a masonry student and secondary school dropout, who had wound up on the streets of Kigali, Rwanda’s capital.

“Then one day the police picked me up and put me on a bus. I had no idea where I was going. When I saw the water, I was so scared. If they had told me where we would end up, I would have jumped out,” he said.

Yet more than a year later, Mugisha admitted he was grateful for his time on the island.

Such words from the island’s graduates, who anticipated returning home in the days following the ceremony, were welcomed by the Rwandan government, known to be is acutely sensitive to Western criticism, particularly regarding its human rights record.

Just last week, in what is believed to be the first such encounter between a journalist and head of state, Kagame engaged Guardian journalist Ian Birrell in a highly publicized “twitterspat,” that began with Birrell calling Kagame “despotic and deluded.”

"You have no basis for your comments and you don't kno what you r talking about me or Rw,” he tweeted.

Whatever the case, the events surrounding the day’s deadly end shed light on the tight control of information in Rwanda — a country Reporters Without Borders ranked third to last in Africa in its 2010 Press Freedom Index, ahead of only Sudan and Eritrea.

A crowd of distraught residents gathered at a Gisenyi hotel the morning after the accident, waiting to receive word from family members who had been on the island. Many had no idea whether their relatives were safe.

Members of the crowd complained it had taken hours before the government publicly reported the incident and that early radio reports neglected to mention that members of the armed forces were piloting the speedboat.

“The government wants to minimize the story,” said one Gisenyi resident, who declined to give his name, fearing repercussions. “We won’t see the whole truth in the local press.”

Indeed, the following day the New Times devoted fewer than 250 words to the accident in a briefing dwarfed by a glowing 1,000-word cover story recounting the “colorful and memorable event” on Iwawa.

“I spent all my past life running away from the government,” it quotes one Iwawa graduate. “In my new life, I will instead be coming closer to the government in whatever I do.”

Such pro-government hyperbole — typical of Rwandan media — reflects the difficulty in uncovering the truth about the island, and many aspects of Rwandan life in general. Though it may be no Alcatraz, Iwawa Island’s reputation hangs in the balance, sold by a stage-managed graduation, yet tarnished by tragedy on Lake Kivu.