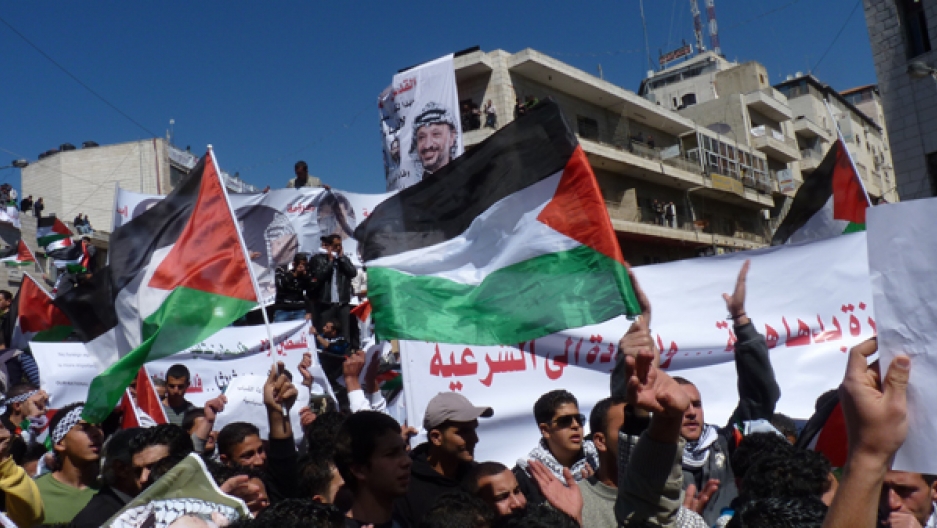 Share
Leaders from the Group of Eight Friday issued a statement in support of President Obama's call to re-start Israeli-Palestinian peace talks. There is no clear sign of that happening any time soon. But something is expected in September. September is when the Palestinians are planning to go to the United Nations and ask members to recognize an independent state of Palestine based on pre-1967 borders. Barack Obama is firmly against the move. "I strongly believe that for the Palestinians to take the United Nations route rather than the path of sitting down and talking with the Israelis is a mistake," Obama said during a visit to Britain this week. He said such a move, "does not serve the interests of the Palestinian people." "It will not achieve their stated goal of achieving a Palestinian state." The president did not have to say it out right. The US is threatening to veto any resolution on Palestinian statehood. From the perspective of Palestinian leaders, that is further proof of the true nature of the American-sponsored peace process. "It's gone on endlessly," said Hanan Ashrawi, a veteran Palestinian politician and member of the Palestine Liberation Organization (PLO). Ashrawi said the peace process has, "created a cover of impunity for Israel, where the US gives it legal cover in the UN and other places and no accountability whatsoever and the Palestinians have no protection." The PLO is heading in a new direction, Ashrawi added. The goal is to seek individual recognition by UN members, "so that we can have access to the International Criminal Court, International Court of Justice, so that we can get some sort of intervention, trusteeship, international groups, whatever." "We need our boundaries recognized, we need international protection," Ashrawi said. "It is time that the Palestinians stop being at the mercy of Israel." Security Council Even with the promise - ­ or threat  ­- of a US veto looming in the Security Council, analysts say the Palestinian campaign for UN recognition as a state could have more than just a symbolic impact, especially if European states vote in favor, or abstain. Overwhelming support by UN members for Palestinian statehood would highlight just how isolated the US and Israel are when it comes to questions of Palestinian rights. There are skeptics though. Hani al-Masri, a columnist who runs a think-tank called the Palestine Center, says a victory at the United Nations in September is likely to be a one-off event that would not fulfill the expectations of Palestinians. "Palestinians need a new strategy," Masri said. "They need to pull off massive uprisings in Jerusalem like Egyptians did in Cairo's Tahrir Square. That would show the Israelis that Palestinians are serious." Other Palestinians worry that formal international recognition along the pre-1967 lines would turn out to be counterproductive in the long run. Sa'ed Atshan, a PhD candidate at Harvard University who is spending the summer in his hometown of Ramallah, in the West Bank, grew up with the dream of a two-state solution, much like the one President Obama still talks about. But the 26 year-old said he has come to think differently in recent months. And he suspects he's not alone among Palestinians of his generation. "In Palestinian society there's (an) old story," Atshan said. "It's a tale about a poor mother who tricks her starving children into going to sleep at night by putting rocks in a pot of boiling water." "Israel, our leadership, and the international community have been telling us, your state is coming, your state is coming," Atshan said. "But in reality, if you look in the pot, it ¹s just a bunch of rocks." Plan B Atshan says it is about time for Palestinians to shift to Plan B: the one-state solution. For him, that means working toward a democratic, binational, secular state that does not favor one ethnic group over another. Instead of recognition at the UN, the thinking goes, Palestinians should be seeking the rights as full citizens under Israeli rule. That is an option most Israelis reject out of hand, of course, because it would mean the end of a Jewish state.