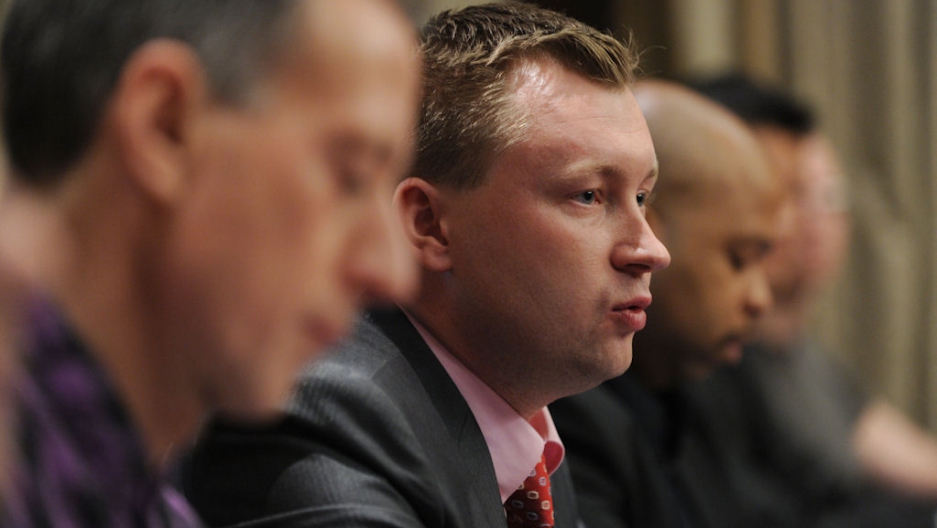 MOSCOW, Russia — It takes a brave person to be openly gay in Russia.

Discussions of sexuality focus on biology: Women’s main task is to look beautiful for men, whose main task, in turn, is to provide for their wives, and then sleep around as much as possible because that is what their genes drive them to do.

Add to that the strict separation of public and private, a division enforced by the ubiquitous eye of the government in the Soviet era, and it would appear there is little hope to dissolve the homophobia that remains prevalent in Russian society.

That hasn’t stopped a daring few from trying.

In one corner there is Nikolai Alexeyev, the outspoken head of Gay Russia, a group fighting to raise the profile of gay rights, namely through a Moscow gay pride rally that has been banned six years running. The group is due to gather on Saturday, despite a promise by the Moscow police to arrest all participants and the fact that previous rallies have ended in beatings. (The government approved an anti-gay rally, held by nationalists and church activists, last weekend.)

Alexeyev has won high-profile champions abroad, from leading British gay rights campaigner Peter Tatchell to Dan Choi, the former U.S. soldier who became the face of the battle against “Don’t Ask, Don’t Tell.” He flew both of them to Moscow to attend Saturday’s rally.

“There is no greater dignity for the human species than to stand up with your brothers and sisters against oppression, against extremism and against discrimination,” Choi told a joint press conference at the Ritz Carlton on Friday. “Russia should be proud to have such a hero of stature, of grace and of dignity as Nikolai.”

Yet within Moscow’s activist society, Alexeyev has won more enemies than friends. He has shrugged off potential partnerships, sued Lyudmila Alexeyeva, the grande dame of the city's human rights community, for defamation, and declared viewpoints that show just how entrenched reactionary thinking remains in Russian society. Some worry Alexeyev's strategy could even lead to a backslide in gay rights.

His blog and Facebook page have achieved almost mythical status in certain circles in Moscow, a treasure trove of rants against U.S. justice, with particular attention paid to Jews, and once an outpouring of serious hate against Lady Gaga after the pop star declined to meet him. Recently he has derided the “illegal prostitute” sent to discredit former International Monetary Fund chief Dominique Strauss Kahn.

“I like to provoke,” Alexeyev says, adding: “I support rights for everyone, irrespective of personal characteristics, ethnic origins, sexual orientation.”

Alexeyev stood and rubbed his leg, speaking after Friday’s conference. The previous day, he had rushed off the set of Russia’s leading debate show, Poedinok (Duel), ramming his foot through the set as he fled the (flimsily built) stage.

Before the filming, Alexeyev expected a fight. The show, on state-run station Rossiya, is hosted by Kremlin-loving provocateur Vladimir Solovyov, and his opponent was Alexander Khinshtein, a deputy of the ruling United Russia party. "I know that we won't win, in fact I know that we will lose," he said. "But I want to put my point of view to the country."

The fact that he was invited on the show, he said, showed that the rights — or, at least, the existence — of homosexuals was now a suitable topic of discussion. In fact, he never stood a chance.

Solovyov sided with Khinstein nearly from the beginning, at one point comparing rights for homosexuals to rights for necrophiliacs and pedophiles. Khinstein ran the gamut of popular Russian arguments against the struggle for gay rights: Why are you provoking violence with a parade? The majority of Russian society is against it.

"I always thought that a person’s sex life is a personal thing, When people go out and their main problem is let us — God, please, forgive me — have sex as we want, it shocks me. A normal person doesn’t do that.” "It's a question of survival — people weren't born different sexes to get pleasure, but for the continuation of the race. We live in a country with a demography problem!"

He finally reached his true point: that homosexuality is immoral. By the time an author in the audience demanded Alexeyev explain why she was receiving hate mail from gay men, he had reached his limit and stormed off the stage.

The show was a disgrace, but Alexeyev has built a name off scandal. He once claimed to be kidnapped by security services as he was catching a flight to Geneva. In April, he released a (false) statement that this year’s Moscow gay pride rally had been approved, creating more of a fuss when the authorities issued their denial weeks later. Although he ran off the set on Thursday, a couple of hours later he took to his blog to say his injury was so bad he might sue the channel.

“Yes, people have started to talk [about gay rights],” said Igor Yasin, a member of gay rights group Equality. “But how they are talking also matters, and they are speaking more negatively. Where is the success?”

Yasin and other activists, worry that Alexeyev, with his repeated scandals and his focus on winning international support at the expense of support inside Russia, might not be charting the best route to gay rights.

Speaking on Poedinok Thursday, Alexeyev said: “One argument is that most Muscovites are against it — even if it’s 99 percent, I don’t care.” Yasin took issue with that. “It’s not right. We have to explain not just why these rights are good for us, but why they are good for society as a whole,” he said. “Activists have to unite.”

Yasin’s group held its own rally — more of a flash mob — last weekend, a quick march down Moscow’s Gogolevsky Boulevard (a march condemned by Alexeyev as “boring” and “a failure” in his blog). A couple dozen activists carried pride flags and shouted slogans. The paltry turnout of any gay pride event held in Moscow begs the question — how many people would turn up even if permission were given?

The problem of accepting homosexuality runs so deep — with many gay men leading double lives with wives and children — and the legacy of public demonstrations so discredited in Russia, that the singular focus on public rallies often appears counterintuitive. The discussion of the rallies and whether or not they are allowed ends up eclipsing other discussions about homophobia, such as on the roles played bynationalism, traditional gender roles, and the hyper-traditional values of the Russian Orthodox Church.

Homosexuality was decriminalized in Russia in 1993 and removed from the official list of mental illnesses six years later. “No one is tried in Russia anymore,” said Yasin, “but that can change if we don’t choose the right strategy.”