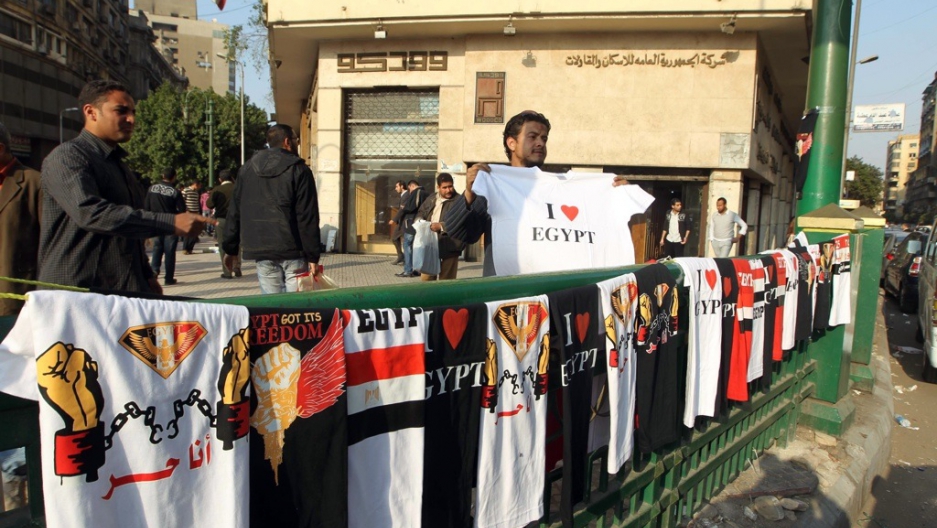 Vendors line the crowded sidewalks around Tahrir, hawking pewter pins, bumper stickers and other trinkets decorated with an oversized, crooked-nosed caricature of the now-deposed leader of three decades.

T-shirts are peddled from a rusty handrail circling Tahrir's perimeter, proudly emblazoned with a date now celebrated as the birth of the revolution, Jan. 25.

Cairo's newest entrepreneurs hope the same souvenir-buying tourists who swarm the Pyramids of Giza each year will one day be drawn to Tahrir Square, presumably eager to walk on the grounds where Egypt's modern-day history was fought for and won.

"Things are really bad now. I haven't had any customers since Jan. 25. Well, maybe a few. But literally, only a few," said Samir Abdel Basset, 41, a vendor in Cairo who peddles tourist trinkets in a shop a few blocks from Tahrir Square.

In the aftermath of Mubarak's ouster on Feb. 11, the political upheaval and ensuing absence of police on Egypt's streets seems to have already scared off nearly one-half of the foreign holidaymakers that normally visit the “land of sun” by now, the high season.

The drop in tourism — a vital sector that provides one of largest chunks of annual revenue for Egypt's dwindling coffers — is one of many reasons the interim military-led government estimates the cost of the revolution to be more than $3.5 billion so far.

With a massive government deficit forecast, unemployment around 12 percent and food prices spiraling out of control, it's understandable that investors are just as nervous as foreign tourists.

Politically speaking, Egyptians see uncertainty in their future as an exciting opportunity. The only given, after all, is that a candidate other than Mubarak will emerge victorious in the upcoming elections, scheduled for later this fall.

Economic uncertainty, on the other hand, is paralyzing panicked investors, businessmen, and even the interim government, raising even more fears that financial stability in the Arab world's most populous nation is far from a reality.

"The economy is looking pretty dismal right now," said Magda Kandil, the director of the Egyptian Center for Economic Studies.

"Unemployment and an unbalanced distribution of wealth are what fed into the frustration that ultimately led to the revolution. But when you look at what the revolution wanted to accomplish, it now seems like things have actually gotten worse."

The few signs of positive growth under Mubarak were usually undercut by the fact that most of the earnings never trickled down to the estimated 40 percent of Egypt's 80 million residents who live below the poverty line.

Today, however, there are new fears that the poorest Egyptians — those who scrape by on less than $2 a day — could get even poorer.

"The poverty line is shifting. Post-revolution indicators show that poverty could actually get worse during this period," said Abdel Fatah el-Gabaly, an economist at the Al-Ahram Center for Political and Strategic Studies, a state-run think-tank.

The average Egyptian isn't scrutinizing the country's embattled stock market, which lost a staggering $12 billion in January. Nor are they likely aware of the fact that foreign investment in Egypt has fallen completely flat — to levels hovering just above zero — since Jan. 25.

Instead, their main concern is how to put food on the dinner table amid rising prices.

Locally grown vegetables, for instance, have more than doubled in price since 2010.

"Tackling the inflation in food prices requires reform in the agricultural sector, and this is absolutely vital to Egypt," said Angus Blair of Beltone Financial, a regional investment bank. "Many of the tomatoes coming from the countryside, for example, spoil before they even reach the market. Usually they are packaged improperly and then rot in the high heat en route to Cairo."

With flare-ups of sectarian violence in the capital and a war in neighboring Libya, from which more than 100,000 newly unemployed Egyptian refugees have recently returned home, Egypt's government faces many challenges.

Government officials blame the post-revolution downturn on disruptions caused by protesters in places like Tahrir, where demonstrations still occur frequently.

Workers' strikes have also destabilized the economy by cutting production in the industrial sector by half, which has reduced Egypt's ability to export by 40 percent, according to government statistics.

Egypt's finance minister recently warned that the government deficit could be as high as $30 billion next fiscal year.

Some analysts and economists, however, criticize the rise in government spending, which is apparently aimed at placating public anger on the street.

"One problem is that they just raised government salaries. But if inflation is already near the same rise in level, the person getting more money doesn't really have more purchasing power," said Kandil. "From a worker's perspective, it may feel good. But from an economic perspective, it actually destabilizes the economy and leads to greater inflation."

The only real sign of hope is the recent promises of billions of dollars in foreign aid and debt relief from the United States, Saudi Arabia and the World Bank, among others.

Most economists agree that Egypt's short-term costs are well worth the possibility of long-term future gains.

"We are witnessing the price of democracy. You can't expect a revolution to pass without any impact," said Monal Abdel-Baki, a professor of economics at the American University in Cairo. "Once institutional frameworks like the parliament and presidency are established, we'll see the end of this phase."

But how, when, and if the millions of foreigners decide to return is still a concern for workers in the vital tourism sector.

For Samir Abdel Basset, life in the souvenir shop simply must go on — even without customers.

With little income, the young vendor can barely afford to drink his usual five daily cups of sweet tea. Still, he trudges on with a smile, smoking cigarettes and watching old Egyptian soap operas to pass the time in his empty shop.

"What else can I do? Customers will come back at some point, I think. Everything, of course, is up to God," he said.