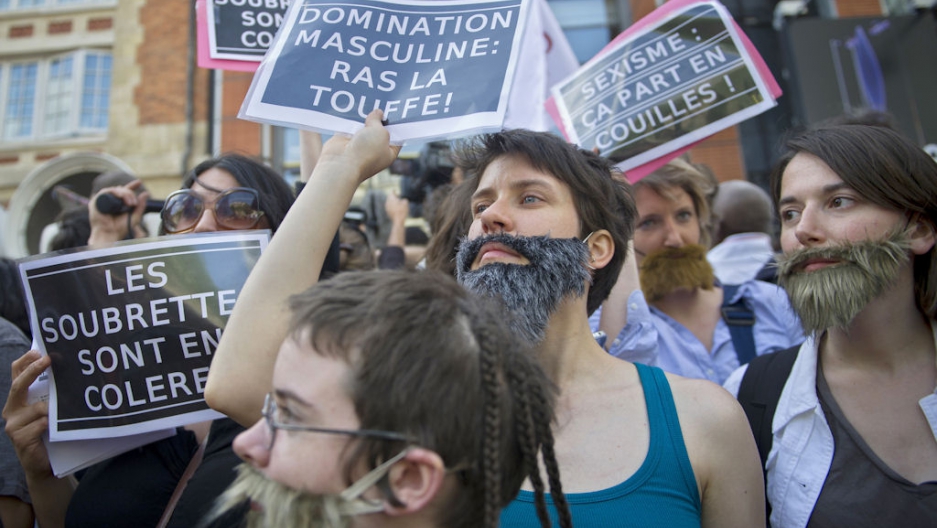 Women, mostly members of feminist groups, wear fake moustaches and beards and hold anti-sexist placards as they demonstrate in Paris on May 22, 2011 against the political and media reaction to the sexual assault allegations against former IMF chief Dominique Strauss-Kahn.
Credit: Bertrand Langlois
Share

PARIS, France ― The Dominique Strauss-Kahn sex scandal has sent the French reeling from shock to disbelief, from indignation to humiliation, from denial to resignation.

Meanwhile, some outsiders are reeling from what the scandal has revealed about French notions of equality and privilege.

At first, disbelief was a nearly unanimous reaction from members of the Socialist political establishment. Colleagues came to strident defense of Strauss-Kahn, who resigned as head of the International Monetary Fund last week after a hotel maid accused him of sex crimes and he was arrested in New York. Strauss-Kahn, who denies the charges, had been expected to run as the Socialist candidate for president of France next year.

Bernard-Henri Levy, a friend of Strauss-Kahn, found the allegations so absurd that he declared in a written statement that, “the Strauss-Kahn I know, who has been my friend for 20 years and who will remain my friend, bears no resemblance to this monster, this caveman, this insatiable and malevolent beast now being described nearly everywhere.”

The attitude from French leaders and the media toward Strauss-Kahn and his Guinean immigrant accuser seemed to confirm what minorities and the poor have long said about being French: The law might treat them the same, but the powers that be do not.

If the charges against Strauss-Kahn had been brought in France, “they would never have had the same consequence,” said Dominique Carreau, a French international lawyer and scholar who has taught law both in Paris and New York. Powerful people might have told the woman to keep her mouth shut, he said.

“In our society, it would have been almost impossible” to bring such charges, Carreau said. “We’ve taken a fantastic lesson in democratic justice” by seeing what is happening in America.

Rokhaya Diallo, a political activist who heads an association promoting diversity in France, observed a familiar pattern of “class solidarity” among France's political class. It was as if, “one of their own just couldn’t have committed those acts.”

Would the allegations have been more believable if they had been made against, say, a rapper and not a powerful economist slated to run for president, Diallo asked rhetorically? She’s convinced few would have leapt to defend the rapper.

"They are people of the same category who wanted to protect one of their own,” Diallo said.

One Socialist leader urged the public to wait for Strauss-Kahn’s version of the events before passing judgment, saying the facts still needed to emerge.

“Time is for establishing the truth,” Pierre Moscovivi told a TV news program, discounting the possibility that the maid might be the one telling the truth. Another Socialist leader said that there was indeed a victim, but whether it was Strauss-Kahn or his accuser remained to be seen.

Some, attempting to shift the focus on the woman, wanted to know how long the housekeeper had been employed at the Sofitel in New York City, where the alleged attack took place.

The same people who were accusing the American judicial system and media of denying Strauss-Kahn his presumption of innocence, Diallo said, were denying his accuser any benefit of the doubt and therefore any justice.

“France is not a country of equality. We’ve remained an aristocracy,” said Diallo. “Nobility titles no longer exist but they’ve been replaced by diplomas.”

Part of the shock of seeing a handcuffed presidential hopeful flanked by police detectives in front of flashing cameras stemmed from the idea that a powerful, rich, white man who attended the same elite schools and cocktail parties as other leaders could be treated thus over the words of a black Muslim maid of modest means. “We’re not used to seeing our leaders fall off their pedestals,” Diallo said.

The word equality may be part of the country’s national slogan, “Liberty, Equality, Fraternity,” but France is a place where everyone vies for special treatment, for something extra to distinguish himself from his neighbor, Carreau said. “A Frenchman is … always going to seek unequal treatment.”

Furthermore, he said, the French have a real problem with how they relate to money. “Every nation has its dirty words. In America it is sex and taxes. In France it is money.”

As a result, class differences persist even though “we pretend there is equality everywhere,” Carreau said. “Even if the law is exactly the same, we don’t treat you in the same manner."

That the case was proceeding at all indicated to Diallo that there was as at least some empathy in America toward the woman despite her social status.

Women’s groups have denounced the disregard and lack of compassion the woman has received in the French press, which unlike the American press has named her. They wrote an open letter to the woman apologizing on the behalf of the French establishment for its thoughtlessness in not considering her and what she must be enduring; suggesting perhaps the tone will shift in France as events unfold.

Though President Nicolas Sarkozy has remained relatively quiet on the matter, Claude Gueant, the interior minister, reiterated to French media that France’s image was at stake here as well. While he commended Strauss-Kahn’s friends for coming to his defense, “sometimes they are too focused on the fact that the possible culprit was a victim,” he said. “I was offended.”