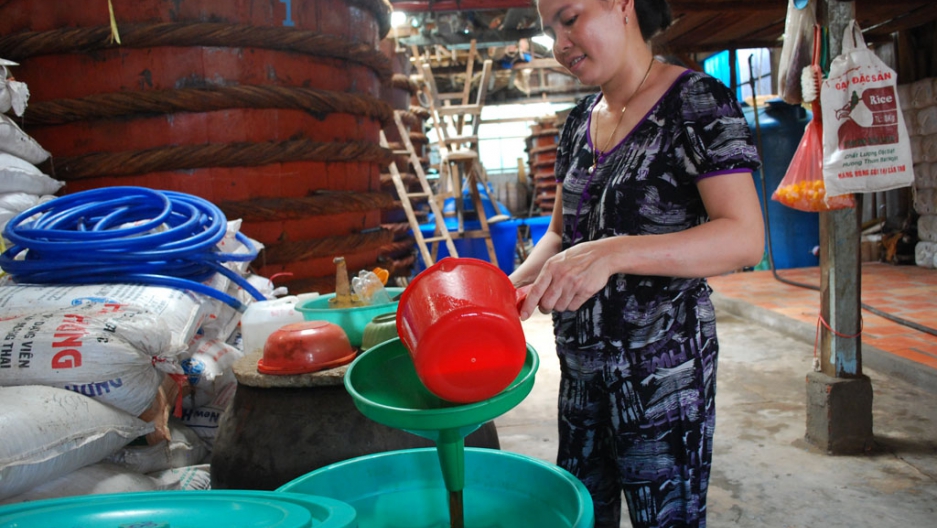 A factory worker measures the amount of fish sauce before it's packaged and sent out for consumption.
Credit: Geoffrey Cain
Share

The school was combined with a fish sauce factory that educated workers in modern commercial methods. The idea was to help some Vietnamese laborers become self-sustaining so they could resist French rule.

Here, Cung met mentors who would help him shape the next 60 years of history. Thirty years later, he began using the name Ho Chi Minh.

The practice of using companies to fund and provide cover to insurgencies was common during the Indochina conflicts. Today, the communist party of Vietnam has bestowed honors on the Lien Thanh fish sauce company and its Duc Thanh school, turning their original buildings into museums.

Keeping with its legacy, Lien Thanh claims to be one of few groups that uses fading traditional methods for fermenting fish sauce, known in Vietnamese as nuoc mam.

“We’ve been trying to figure out how to balance the old ways while finding ways to mass produce,” said Ngo Thi Hoang Mai, a vice president at the company. “We don’t dominate the market because of that, but our foreign competitors do.”

Fish sauce is a staple item in Vietnam akin to olive oil in Italy and Scotch whisky in Scotland, used in marinades, soups or as a side for dipping meats and noodles.

For more than 100 years, fishermen here in Phan Thiet, and especially on the southern island of Phu Quoc, have produced two types of what Vietnamese know as classic fish sauces.

The coasts of Phu Quoc harbor a type of minnow that is prized as the central ingredient in a quality jar of nuoc mam. The 90 or so family-owned businesses on the island catch the fish and let them rot for between two weeks and three months in factories, where they’re processed, canned and shipped around Asia.

Rotting fish doesn’t make for a pleasant odor. Wood barrels line the factories of Phu Quoc, filled with a liquid topped with a slimy orange layer. Among many secret family recipes, fish sauce makers typically mix a ratio along the lines of 7 parts of fish and 3 of salt.

At the Khai Hoan factory in Phu Quoc, fish sauce bottles are lined up by the quality of their bottles reflected in their colors. The purest fish sauce is dark and was fermented from the first extraction of liquid. The lower quality items are sold after water had been added, tinging them with progressively lighter colors.

The higher quality extractions are typically used in domestic products such as dips and sauces. The ensuing sauces are used in industrial vats or for cooking.

“The industrial products really drive the industry,” said Nguyen Anh Duyet, who’s owned a nuoc mam factory in a slum of Phu Quoc for 50 years. “They’re lower quality, but that seems to be how the industry survives, by producing more at cheaper prices.”

In a country today known for its honking horns and high-rises more than its revolutionary fervor, cheap mass production is the cornerstone of this industry.

Environmental damage is killing off fish populations, and companies are increasingly selling chemically synthesized copycats that are cheaper and easier to mass-produce.

“We’re seeing a battle to preserve the brand names,” says Nguyen Chi Hung, 34, a third-generation fish sauce maker at Khai Hoan who claims his family struck a fortune of $20 million. “Lots of companies are coming in and making fake products, but they will only ruin their label.”

It’s difficult to pinpoint the amount of fish sauce Vietnam produces each year, since many companies are secretive and are known to exaggerate their sales. In a typical year, Phu Quoc produces about 13 million liters of nuoc mam. But in the past two years, that number has hovered around 8 to 9 million.

The industry is also rife with knock-offs. Many nuoc mam products consumed by overseas Vietnamese groups in the U.S. and Europe claim to come from Phu Quoc, but are actually made in Thailand.

Businesspeople and fishermen have been looking for ways to ensure that the coveted Phu Quoc name is preserved. Last year, they successfully lobbied the Vietnamese government to require companies to truthfully use the “Phu Quoc” label on their bottles.

But the extent that officials will enforce the label is unclear. Industry representatives are also in talks with the World Trade Organization to protect the Phu Quoc name.

But gaining legal status could take years to negotiate and may not even have the intended results.

The European Union, for example, already gives protective status to the prized peppers of the nearby Kampot province in Cambodia — a victory that hasn’t seen firm results in curtailing Chinese and Vietnamese knock-offs.

Phu Quoc, a short boat ride away, faces a similar struggle, where preserving a historical legacy is standing up against the tides of the modern market, Duyet says.