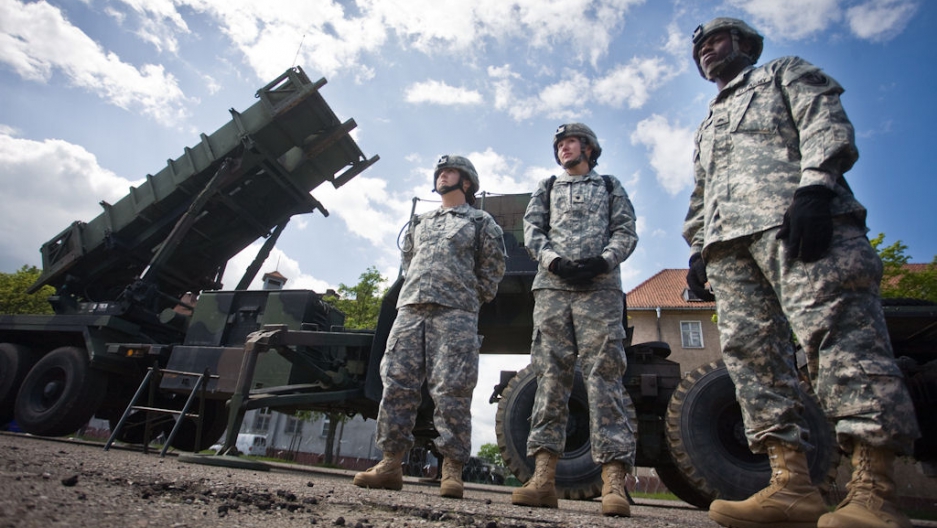 U.S. soldiers stand on May 26, 2010 in front of a Patriot missile battery at an army base in the northern Polish town of Morag. Polish and U.S. officials unveiled the first battery of U.S. surface-to-air Patriot-type missiles to be stationed on Polish soil, at the base just 40 miles from the Russian border.
Credit: Wojtek Radwanski
Share

WARSAW, Poland ― When U.S. President Barack Obama lands in Warsaw on Friday he will receive a very warm welcome from Poles, even though Poland's traditionally pro-American feelings are now tempered by caution and realism.

“It is certain that Poland is one of the most pro-American countries in Europe, only that the temperature of that pro-Americanism has fallen,” said Radoslaw Sikorski, Poland's foreign minister, in an interview with the Rzeczpospolita newspaper.

Prior to the U.S. president’s visit, state department officials reiterated the old platitudes. “Poland is one of our key allies in central and eastern Europe,” said one in a briefing. There is no denying, however, that the bloom is off the relationship, and there is little that Obama can do to change that.

When asked why Poland is no longer as enthusiastic about America, Sikorski replied: “It comes from American mistakes. The administration of President Bush promised all sorts of things to the [social democratic government that ruled from 2002 to 2005] in return for our engagement in Iraq ― and did not follow through. Now we are seeing the consequences.”

Sikorski also pointed out that Poland's increasing engagement in the European Union means that the United States simply carries less weight in Poland.

Ever since the Second World War Poland had been strongly pro-American, seeing the United States as the best hope of eventually regaining its freedom from the Soviet Union. Although the United States had agreed to divide the continent in half, leaving Poland in the Soviet sphere of influence, Poles reserved their most bitter feelings for Britain and France, wartime allies they felt had betrayed them.

The strong U.S. defense of Poland when the communist government crushed the Solidarity labor union in 1981 cemented that affection, as did the personal experience of tens of thousands of Poles who had made their homes in the United States.

When Poland regained its independence in 1989, Washington was a strong proponent of allowing Poland and other central European countries into NATO, giving them security against any possible Russian resurgence.

The peak of the Polish-American friendship was the 2003 invasion of Iraq, when Polish special forces took part in the original attack, one of only four countries to do so, thereby infuriating Poles’ west European allies. Poland then took over one Iraqi province for the U.S.-led occupation. At the same time Poland provided one of its military airports for U.S. authorities to use for their secret detention program of terrorist suspects.

Warsaw was also negotiating with the United States to house an anti-missile system on Polish territory, to the enormous annoyance of Russia.

But the Iraq invasion turned into a disaster and promised commercial contracts for Polish companies never materialized. Allowing CIA flights to Poland has opened the country to international investigations and allegations of permitting the torture of U.S.-held detainees on its territory.

The Obama administration also backed away from the missile shield, clumsily announcing its decision on Sept. 17, 2009, the 70th anniversary of the Soviet Union's invasion of eastern Poland in 1939.

It’s clear to the Polish that their economic and political future rests with the European Union and not in trying to build a special relationship with the United States. When Poland joined the EU in 2004, more than a million Poles flooded out to find legal work in Britain, Ireland and other west European countries, while the number of migrants to America ― where borders have become more secure since 9/11 ― fell.

That does not mean that the United States is irrelevant, just that it is less crucial to Poland than at any time in the recent past.

Obama will be faced with renewed questions about removing U.S. visas on Polish travellers, something he promised to solve during his presidency, but which remains at an impasse because the number of Polish visa rejections make it impossible to fulfil congressional requirements to join the visa waiver program.

The president is also likely to agree to rotate a U.S. fighter squadron through Poland, which will satisfy Poles that they remain covered by the U.S. security umbrella.

Finally, Obama is also likely to promote U.S. companies at the forefront of exploring for shale gas in Poland. Poland has the most promising potential deposits of the controversial fuel in Europe and U.S. companies have developed the technology to explore and extract the gas.

Obama will also meet regional heads of state at a Warsaw banquet, allowing him to again reiterate the importance of central Europe. He is also going to see if Polish experience in managing a transition from dictatorship to democracy could serve as a useful model for Arab countries like Egypt and Tunisia which are beginning transitions of their own.

“We still need the United States,” said Sikorski, pointing out that Poland and the rest of the region still ultimately depend on America for their security. “Despite large internal problems and fighting two wars where more than 140,000 U.S. soldiers are serving, America has not resigned from guarding the security of the world.”

Jan Cienski is Warsaw bureau chief for the Financial Times.