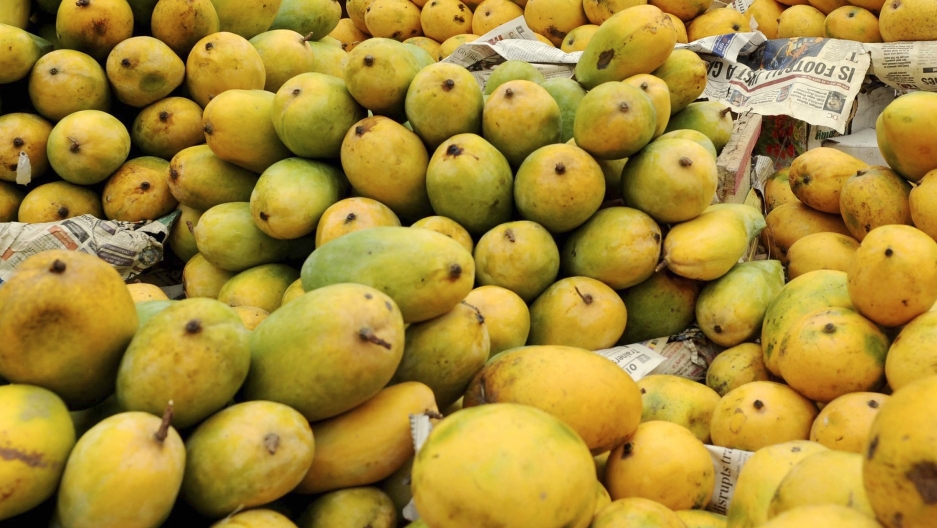 TAPACHULA, Mexico — It used to be easy to grow mangoes: the rains came every year, bees and other pollinators did their job, and soon the mangoes were ready to pick.

But this year a combination of heavy rains and extreme temperatures caused the mango flowers to bud too early. That, in turn, produced small seedless mangoes that are essentially worthless.

Over the past two years, the crop of Ataulfo mangoes (the gold-colored variety sold as “champagne” mangoes in the U.S.) has fallen 60 percent.

As a result, many growers are ripping out their finicky mango trees and instead planting sugar cane or palm, fast-growing crops that give a more regular harvest but require more costly fertilizers and pesticides.

Farmer Roberto Fourzali Moises said about half of his crop this year is malformed. A properly formed mango fetches up to $2 in U.S. markets, while the tiny ones can't be sold.

“The seed hasn’t formed because of the heat," said Fourzali as he sorted through a basket of oval fruit, some the size of his hand, others about a third as big. “We can’t sell the little ones.” A chemical engineer turned farmer, Fourzali has been raising Ataulfo mangoes in the Soconusco region of Chiapas for the past 18 years.

Farmers’ biggest worries used to be getting their goods to market in the United States or Europe. But things have changed, and the climactic conditions that used to run like clockwork are now creating havoc, growers say.

“We’re getting damage from heat and rains. We are in a very strange year," said Fourzali, standing in the shade of an umbrella-like mango tree on a recent 95-degree day.

Fourzali's troubles are echoed across Chiapas, which produces more Ataulfo mangoes than anywhere else in Mexico. Mexico provides 60 percent of the total mangoes eaten by U.S. consumers.

“We usually get 150 pesos a box,” said Eusebio Carlos Ortega, president of the Soconusco Mango Growers Association in Tapachula. “Now we’re getting 40 or 30 pesos because of all the little ones. It’s been a big disaster.”

Chiapas is home to nearly 6,000 growers, who send about 200,000 tons of mangoes to the U.S. and Canada each year. The Ataulfo variety comes to market early, around February or March. Its thin skin, creamy golden color and lack of fibers (the annoying ones that get stuck in your teeth) have made it a popular choice in many upscale U.S. supermarkets.

Carlos Ortega blames weird weather, but also says the farmers themselves may have made things worse. The region had a big cotton boom a few years ago, and growers used too many pesticides and fertilizers that eventually depleted the soil and killed off many of the insect pollinators.

A 2008 study by agricultural researchers at the U.S. Agency for International Development backed up that assessment, finding that mango production per hectare in the Soconusco region had dropped from about 15 tons in 1995 to two or three tons in 2008.

Outside experts say the combination of bad management practices and climate changes are hurting the mangoes and other important cash crops from Chiapas.

“The variability between dry years and wet years has become much higher,” said Michael Richter, professor of geography at the University of Erlangen in Germany who has been studying climate change in Mexico and South America. Richter says that the average temperature in Tapachula has risen more than 6 degrees Farenheit in the past 30 years, and notes that warmer air leads to more moisture and stronger, more frequent downpours.

That’s easy to see up in the nearby Sierra Madre mountains, a prime coffee-growing area about two hours drive north of Tapachula. There, on cool west-facing slopes at 3,500 feet above sea level, grow the red berry-like coffee beans at Finca Irlanda.

“Coffee needs a lot of rain, but this was too much,” said Walter Peters, a 78-year-old who has been growing organic coffee here on 720 acres since 1967. “Usually, the rainfall here a year is 14.75 feet a year. Last year, in four months, we had 15.75 feet. Something is happening. Nobody knows exactly what is the cause.”

Peters said his coffee crop dropped in half last year, and believes the world’s changing climate is to blame. While farmers and growers are generally a pessimistic lot —and a few bad years do not make an ecological disaster — there are troubling signals.

Coffee growers in Colombia are reporting similar disruptions in rain and temperature patterns, which have led to a 25 drop in the harvest of high-quality Arabica beans since 2008. As a result, Latin America coffee prices have risen 85 percent since last June, the New York Times reported in March.

Peters says his son, who now runs the business side of the plantation, may switch from coffee to greenhouse-grown tropical flowers and easy-growing timber. Both require fewer workers, and could lead to more rural field hands heading north of the border to look for work.

For his part, Fourzali says he’s experimenting with new production methods and hardier varieties to keep his farm and his dozen or so employees going.

“We don’t like that [workers] go to the United States, we prefer they stay here,” Fourzali said. “But if I don’t earn money, I have to cut the workers.”