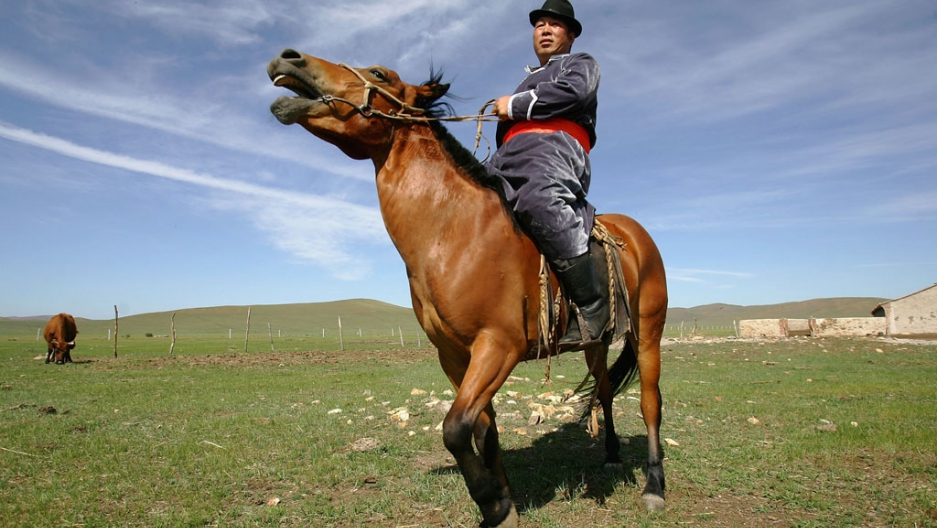 Thousands of Mongolians took to the streets Wednesday, demanding better protection of their rights after a herder was hit by a truck, rights groups reported.

Ethnic Mongolians in China's Inner Mongolia Autonomous Region rarely express dissent toward Chinese rule, but the death of a herder named Mergen has proven an exception.

Mergen had been among the herders trying to block a caravan of coal trucks from destroying their grazing lands. On May 10, he was run over by a truck driven by an ethnic Han Chinese. One report said Mergen's body was dragged for nearly 500 feet.

Inner Mongolia covers more than 10 percent of China’s land area and is now the country’s biggest coal producer. As its resources become more in demand, well, you can guess what happens next.

The Chinese government has been relocating more than 250,000 nomads from Inner Mongolia, under the guise of protecting the grasslands.

Mongolians see it differently. They are already hugely outnumbered by Han Chinese (ethnic Mongols are 17 percent of the Inner Mongolia's 23 million), and they say they are now being further marginalized.

But this isn't a story about how a bad situation in one remote area led to a rare act of protest. This is the story that reminds us of Asia's many moments of dissent, even in cultures not prone to making a fuss over criticism.

Consider others who have protested Chinese rule.

Tibetans rose up in 2008, though that didn't end well. China cracked down vehemently, killing (by many accounts) well over 100 people. In the years since, a more quiet, metered form of resistance has emerged in Tibet.

The Uighurs rioted en masse in the far-western region of Xinjiang in 2009. Nearly 200 people were killed during the mayhem.

In recent weeks, authorities have detained hundreds of Tibetan monks for "legal education" in Sichuan after a monk set himself on fire.

There are the Red Shirts in Thailand, who occupied major portions of Bangkok in their quest to topple the government in 2010.

And even in Japan, a country where conformity is highly valued, anti-nuke rallies have become common in recent weeks. Demonstrators have gathered in Tokyo, Osaka and Kyoto to openly criticize the government’s response to the Fukushima nuclear power plant meltdown.

But don't expect to see the masses rising up with any reliability in China.

Though an estimated 100,000 “mass incidents” occur in China every year, they tend to arise over hyperlocal issues in far-flung, more under-developed areas (like, say, Inner Mongolia).

As for big cities like Shanghai and Beijing, GlobalPost's Kathleen McLaughlin says that despite the widening gender gap — that could easily agitate the masses, particulary the masses of single young men — there won't be large-scale protests anytime soon.

What’s missing from the equation is massive unemployment and economic decline.

In the world's second largest economy, opportunities are abundant, or abundant enough to keep frustrated people more less out of the streets.

Just not in Mongolia. Where the herders are raging and calling for mass protests next Monday.