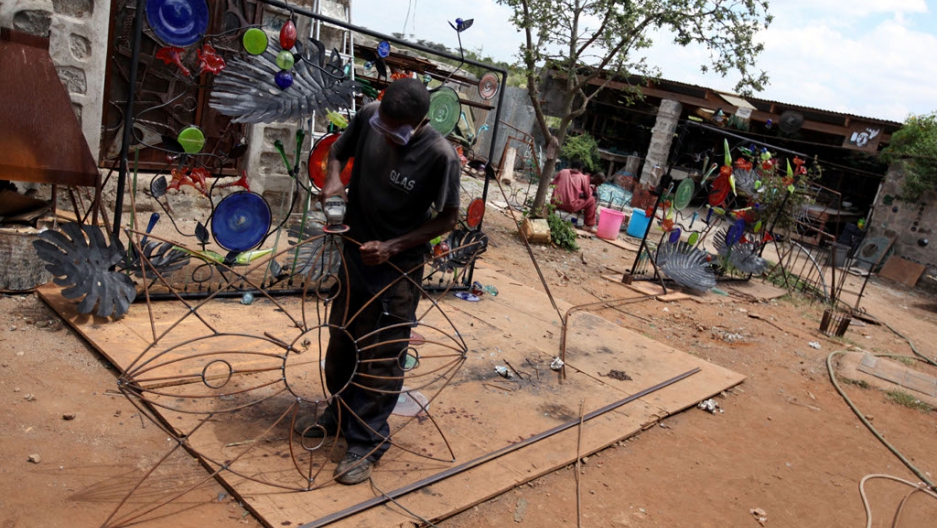 Outside, a welder works on a section of a multimedia mural of glass and metal (in background).
Credit: Tugela Ridley
Share

NAIROBI, Kenya — Spread out among the trees on the edge of a national park miles from the nearest paved road lies a surreal wonderland, a gothic psychedelia of raging furnaces and billowing smoke, molten glass and crushed metal, Gaudi spirals and Picasso faces, misshapen statues and mosaic animals.

At the center is a vast red brick beehive lined with stained glass windows. The embedded glass mimics the sky’s constellations and makes the smoke-darkened dome into a planetarium.

Inside a beam of bright sunlight from the chimney-like hole in the top of the roof illuminates the gloom while a furnace holding 880 pounds (400 kg) of liquid glass burns white hot at more than 1,000 degrees Centigrade (1,832 degrees Farenheit). Men in sooty overalls shuffle about, molding the old glass into something new.

The glasses, bowls, goblets, vases, plates, lampshades, chandeliers, tables, chairs and more that are made at Kitengela Hot Glass studios 20 miles outside Nairobi are hand-crafted by a team of Kenyan glassblowers trained and overseen by Anselm Croze, a 45-year-old British-born Kenyan glass artist who lives here with his wife and two sons.

“This isn’t just about making things for ourselves. It’s about starting a Kenyan craft,” explained Croze. “There’s training available here and I hope that engendering this craft will be part of my legacy here.

“Every piece is unique and has the touch of the man who made it, which is nice in this age of mass production,” he added.

Charles Kyalo is one of 40 employees and was among the first Kenyans to begin learning the art of glassblowing here 17 years ago.

“I had never seen anything like this before,” recalled Kyayo as he took a break from the heat of the furnace, lounging among a collection of half-made glass and metal tables and chairs outside the beehive.

“When I started it was a hard job, the place was so hot! But you get used [to it]. Now I really enjoy the big objects: vases, plates, chandeliers,” said Kyayo.

The largest single piece that Croze and his team have so far created hangs in the atrium of a new office building in Nairobi, a 1.4 ton chandelier made up of 700 separate pieces of glass.

In Tanzania to the south they redesigned a hotel on the edge of the Ngorongoro Crater, transforming the staid and outdated public areas with riotous glass and metal murals and hundreds of yards of strings of glass baubles and lights.

Despite the immense heat required for glassblowing, and the beauty of the objects created, the entire operation is, as Croze puts it, “totally off the grid.”

Recycled engine oil accounts for all of Croze’s energy needs, the furnace is fired by steam injection, the beehive acts as a vast convection chamber sucking out the heat, and the molten glass is all recycled bottles and windows.

Recycling is at the heart of the innovative operation, something that Croze says is typical of Kenya’s “jua kali” handcrafts.

A literal translation of the Swahili phrase “jua kali” is “hot sun,” but the term really refers to the handmade, patched-up and re-worked things that define Kenya’s informal economy where nothing is wasted and everything re-used.

This is false modesty because what Croze and his family have done is to allow their imaginations to run riot.

It’s not just the mosaic-covered buildings or woozy concrete walls, or the car sliced up and sticking out the ground, or the huge wire-framed cow decorated with bottle tops and squashed beer cans, or the disembodied pieces of other cars scattered about, or the strangely proportioned statues with elongated legs and faces, or the Easter Island replica head with a nose ring, or the shiny pieces of mirror that glint from among the grass … it is that everywhere you look are fragments of someone else’s imagination.

“My mum did the garbage cow, the Easter Island head is mine,” shrugged Croze.

“We have a family ethos of ingrained arts, a very strong artistic imbuement through the family and generations,” said Croze. “Buildings are sculptures that you live in. It’s natural to make things beautiful around you, it’s a constant obsession.”

Croze was born in Britain but the family soon moved to Tanzania and then Kenya. In 1979 his mother, Nani Croze, established the Kitengela glassworks with all its weirdness. She still lives and works just a few yards from her son’s furnace.

Croze now has a small chain of his own branded shops around Nairobi and he hopes to keep expanding the business. He is ambitious and talks of creating large-scale public art that “will last for a thousand years,” and enthuses about the training programs that have seen artists come from around the world to train African glassblowers from Uganda, Ethiopia and Ghana.

Meanwhile he is still experimenting and innovating trying to take the glassworks where his imagination leads. Right now Croze is fixated on giant-sized jewellery to adorn buildings and on creating ethereal glow-in-the-dark objects by blending natural phosphorescence with recycled glass.