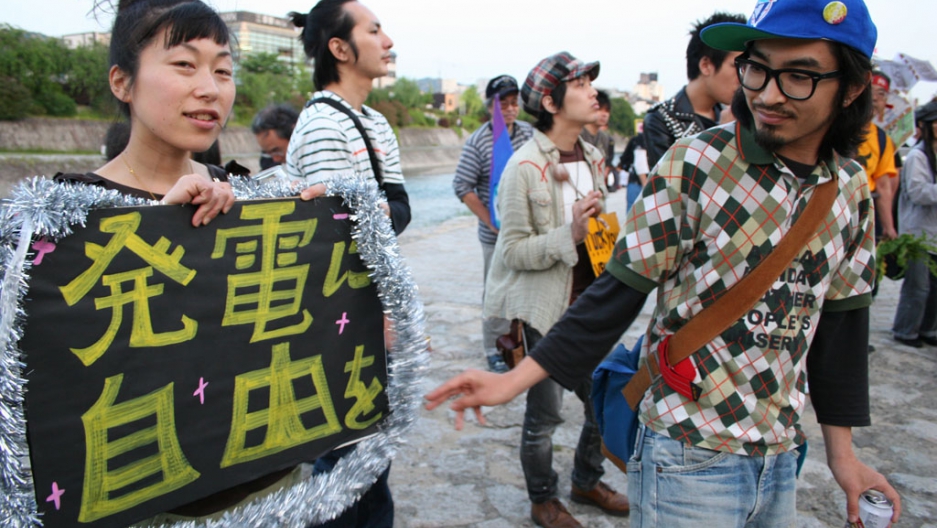 Kyoto students gather along the banks of the Kamo River to protest Japan's reliance on nuclear power. One holds a sign saying "Freedom of electricity" and urges the government to transition to other sources of energy.
Credit: Sonia Narang
Share
.incontent{display:none;}

KYOTO, Japan — It used to be that a large group of people holding colorful signs and shouting into megaphones, parading through the streets of just about any city in Japan was hard to come by.

Or, more to the point, not since the tsunami and earthquake rendered the Fukushima Dai-ichi nuclear power plant a disaster zone on March 11.

Protesters are angry and feel that the government has concealed information, and released partial and/or confusing information relating to the series of disastrous events at the stricken reactor following the tsunami and quake. Just this week, partial meltdown of fuel rods was confirmed at the No. 2 and No. 3 reactors.

In recent weeks, demonstrators have gathered in cities across the country — including Tokyo, Osaka and Kyoto — to openly criticize the Japanese government’s response to the Fukushima power plant meltdown.

Many say they have been against nuclear power for a long time, but no one has listened until now.

In a country where conformity is valued and large-scale public criticism is rare, these rallies have become a common sight.

Last Thursday, as the sun went down over Japan’s historic and cultural capital, Kyoto, a group of about 250 people assembled at the banks of the Kamo River to protest Japan’s reliance on nuclear energy.

Japan has 54 nuclear plants and as of March, nuclear energy made up 30 percent of Japan's electricity grid. This amount was expected to increase to 40 percent by 2017 and up to 50 percent by 2030, according to Reuters/World Nuclear Association.

Prime Minister Naoto Kan is expected to reaffirm his nation's commitment to nuclear power at the G8 summit later this week.

Many criticized government officials and the Tokyo Electric Power Company (TEPCO), which runs the Fukushima plant, for not releasing information regarding dangerous levels of radiation around the stricken plant.

Others said they had opposed nuclear power for years, and especially worry about the safety of four large nuclear power plants in nearby Fukui prefecture, along Japan’s western coast. They called upon the local Kansai Electric Power Company to shut down the nuclear plants in Fukui, located about 60 miles from Kyoto.

Now that Japan’s nuclear power plants are in the international spotlight, they said they have a better chance to reach government officials.

“I’ve been against it forever, but there have never been that many people participating in the demonstrations,” said Wako Kato, who marched in the rally holding a large sign reading “Save Fukushima.”

“Now that people are interested and aware, we have to take this as an opportunity. Once interest goes down, we won’t have a chance.”

She said she’s hopeful Japan could shift its energy dependence from nuclear to renewable energy sources within three years.

“Even before the earthquake, I’ve been against nuclear power agendas and industries,” said Hiroshi Miyazaki, a doctoral student in Kyoto. “The more I researched the nuclear industry, the more I knew Japan could not rely on nuclear energy,” Miyazaki said.

When he visited the nuclear plants in Fukui prefecture, he was surprised to see school buildings located so close to the plant, he said.

When the Japanese government deemed schools in the area around Fukushima safe for children after the tsunami, parents not only began to question the government’s safety standards, but also expressed outrage toward the government.

One group called Protect Fukushima Children from Radiation was so upset that they presented a bag of radioactive dirt from a Fukushima-area school playground to education officials in Tokyo.

On Monday, about 400 parents from Fukushima descended upon Tokyo’s Ministry of Education to protest the government’s recently imposed radiation standards for children, which allow youngsters to be exposed to 20 times the previous limit.

Many demonstrators said they want to see Japan transition to other types of energy, including solar, wind, hydroelectric and geothermal, which currently make up a small percentage of the nation’s electricity portfolio.

At the G8 summit, Kan is expected to announce (in addition to reaffirming reliance on nukes) that solar panels may become compulsory on all new buildings by 2030.

As the group made its way down Kyoto’s main downtown thoroughfare last week, drawing the attention of shopkeepers, tourists and police, two women jumped off a bus and joined the group. They said they had participated in similar anti-nuclear power rallies in Osaka, where they were from, in the weeks after the earthquake.

“The attitude of the government is to hide everything from the public,” said one of the women, Yasue Hatta, an artist. She said the Japanese media has neglected to inform people of dangers surrounding nuclear power.

“We have to stand up and say something," she said.

While this kind of direct opposition may seem quite normal in many countries, particularly with the Arab Spring spreading like wildfire in the Middle East and North Africa, it’s uncommon for Japanese to voice anger against their own government.

“Japan never had a history where we had to fight for our rights,” Hatta said. “We always had rights, and we never had to ask for more,” she continued.

Like Hatta, many Japanese are beginning to speak out, loudly, against their government.

Protester Yuki Nakatsu shouted slogans as she carried a large sign that read, “Local Energy Resources.” She said she wants the government to consider alternate energy options. “I’m angry at the Japanese government,” she said. “I can’t help by sitting at home, so I came here to participate today.”

Jennifer Teeter, an American English teacher who lives in Kyoto, said she attended the protests daily, and saw the size of the group increase each day. “More information is spreading through Twitter and the internet,” she said.

A recent demonstration in Tokyo drew 1,000 people, many of whom had read about the protest on Twitter.

“It was organized by a regular person who felt guilty about not speaking out on behalf of the people of Fukushima,” said Ayako Mie, a Tokyo-based journalist who covered the event. The initial Twitter message about the protest was re-tweeted 2,000 times, she said.

Mie said people in Japan are now actively discussing nuclear energy alternatives for the first time. “People don’t really think about things until it really affects their lives,” she said.

But it’s hard to know how long this increase in vocal dissent will last, Mie added.

“I don’t know if people will capitalize on this newfound voice to speak up on other issues,” she said.