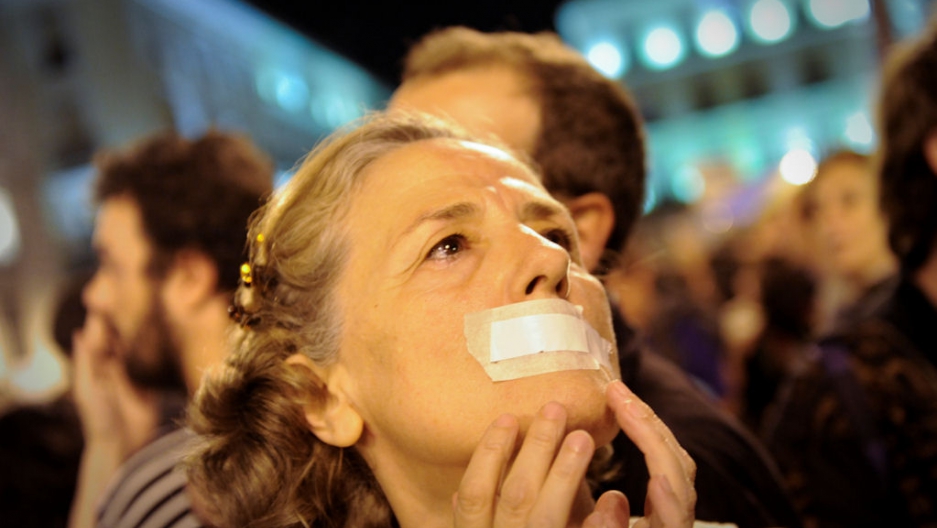 A woman with her mouth taped shut participates in a protest against Spain's economic crisis and its sky-high jobless rate at the Puerta del Sol square in Madrid on May 20, 2011.
Credit: Pedro Armestre
Share

BRUSSELS, Belgium — Any European Rip van Winkle waking up this week after a year-long snooze might get the impression that little has changed.

There's an ash cloud threatening flight havoc and the continent's markets and media are in a panic that Greece's economic woes are far from fixed and risk infecting the rest of the euro zone.

While this year's ash cloud is from an entirely different, although equally unpronounceable, Icelandic volcano, it's still the same old problems casting the economic shadow.

Multi-billion dollar bailouts and a raft of stability pacts and stabilization mechanisms drafted by the EU over the past year have failed to convince markets that nations on the southern and western periphery of the euro zone will be able to get their finances in order to avoid a default on their debts that could break the currency union apart.

A series of mini economic eruptions over the past few days have added to the uncertainty prior to the G8 summit — of the world's eight largest developed economies — in Deauville, France, this week.

On Sunday, Spain's Socialist government was hammered in regional and local elections as voters rebelled against austerity measures designed to bring public finances under control.

The party of Prime Minister Jose Luis Rodriguez Zapatero scored just 28 percent of the vote, failed to win any of the 13 contested regions and lost control of major cities such as Barcelona and Seville. Compounding Zapatero's misery are “los indignados”: a youth protest movement swelled by the ranks of the unemployed who have taken over Madrid's central Puerto del Sol plaza and other city squares around the country.

Spain has more than 20 percent unemployment, the EU's highest rate. Among under-25-year-olds it's over 45 percent.

Although Spain's finances are in much better shape than those of Greece, Ireland or Portugal, the groundswell of opposition to austerity is adding to fears that Spain might not be able to continue delivering on the measures needed to prevent it from following those three euro zone partners in seeking a bailout from the European Union and International Monetary Fund.

Spain is, however, facing competition for the “next domino” title as market jitters spread to Belgium and Italy.

Italian stock markets took a tumble after Standard & Poor's downgraded the country's credit rating from stable to negative. Belgium had its credit outlook similarly cut by another rating agency, Fitch, in a reflection of concerns over its year-long political gridlock.

“Without political agreement over constitutional reform, it will be difficult to achieve a balanced budget,” Fitch said Monday. “Political risk is higher in Belgium than in other euro-area peers given the fractious disputes over the future shape of the state.”

The epicenter of Europe's crisis remains in Greece however.

The 110 billion euro ($155 billion) rescue package that Athens secured last year from the EU and IMF has failed to assure markets that the country will be able to pay back its debts.

Doubts have steadily grown about the Greek government's commitment and ability to made good on promises to hike taxes, drastically cut spending and privatize state enterprises. If it fails to do so, the EU and IMF could hold back on installments of the bailout.

Greek Finance Minister George Papaconstantinou warned in a television interview late Monday that the government would be effectively bankrupt if doesn't get the fifth installment worth 12 billion euros ($17 billion) by late June.

In an effort to calm its creditors the Greek government on Monday approved further plans to cut the deficit, including the sale of state holdings in telecommunications, banking, transport and water companies.

“The government is determined to continue and accelerate the path of fiscal consolidation and structural reforms,” Papaconstantinou insisted.

However, efforts by the Socialist administration to get the main conservative opposition party on board failed, making it unlikely that the reforms will get the broad-based political consensus that the EU says is urgently needed.

Given Greece's failure to calm markets, voices have grown for the country to default on its debts through some sort of “soft restructuring” that would delay payments to creditors. One option would have European creditors voluntarily agree to give Greece more time to pay them back.

However the European Central Bank and the influential rating agencies have warned that any form of restructuring would spark a chain reaction with disastrous consequences for Greece and the wider euro zone.

“If Greece restructures its debt, that means Greece defaults,” Christian Noyer, governor of the Bank of France and a member of the European Central Bank's governing council, warned on Monday. “No one would finance the Greek state for years. There would be a meltdown of the Greek economy. It would be a horror story. That is why we are against restructuring.”

The only alternative, according to the Central Bank, is for Greece, Spain and whatever government emerges from Portugal's elections on June 5, is to face down political opposition and social unrest to ensure the implementation of the tough fiscal measures needed to get their deficits under control.