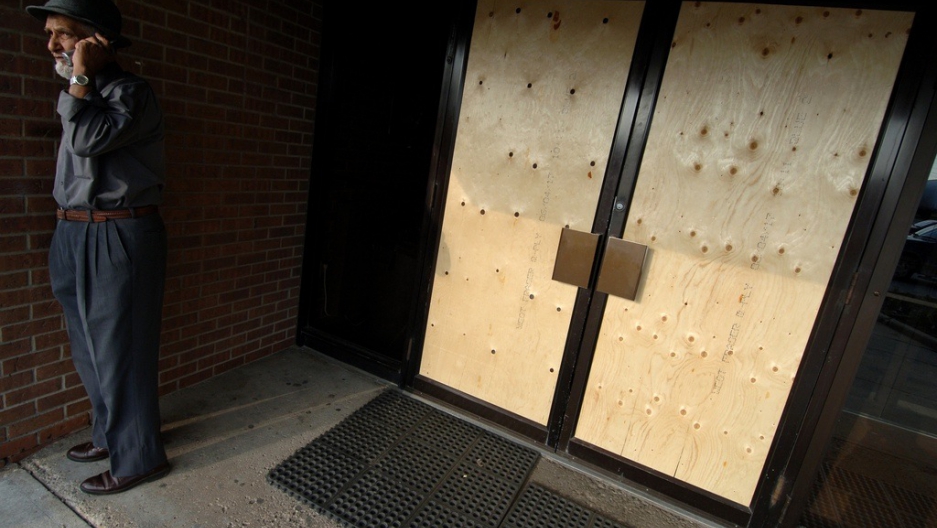 The caretaker for the International Muslims Organization mosque in Toronto stands in the boarded up entrance way to the mosque on June 4, 2006. The mosque was vandalized in the wake of multiple terror arrests in Toronto.
Credit: Simon Hayter
Share

TORONTO, Canada — Mubin Shaikh must be wondering what a man’s got to do to prove his loyalty to Canada.

The conspirators — a group of young men who became known as the Toronto 18 — planned to place truck bombs in several Toronto locations, including the Toronto Stock Exchange. The plot was stopped when, based on information from Shaikh and another infiltrator, police set up a sting that resulted in terrorists being arrested as they bought fake bomb-making material.

Shaikh’s court testimony then helped convict 11 of the conspirators.

Despite his efforts, Shaikh learned last week that he has been placed on a U.S. terror watch list — reportedly because his name was passed on by CSIS, the spy agency that paid him as an informant.

“This is devoid of all logic,” a flabbergasted Shaikh, 36, told the Toronto Star.

Shaikh has made no secret about his youth-time activism in favor of Shariah law, and his travels to Pakistan and the Middle East. He also told CSIS that he knew the family of Momin Khawaja, an Ottawa man convicted for his role in a London-based terror plot.

But what’s also clear is that as early as 1997, he alerted CSIS to a pamphlet he considered dangerous circulating in a Toronto mosque, which called for the creation of an Islamic state through jihad. And his undercover work to break up the Toronto 18 conspiracy is widely known in Canada.

The news of Shaikh being placed on a U.S. terror watch list was contained in a 2009 cable from the U.S. Embassy in Ottawa, obtained by WikiLeaks and first provided to the CBC news network.

The cable lists the names of the 18 people initially arrested in the terrorist conspiracy. The cable then adds: “Canadian authorities have not arrested 9 other individuals involved in the Toronto 18 conspiracy.” It proceeds to list those nine names, including Shaikh’s. (WikiLeaks has redacted the names on its website.)

A second State Department cable in 2010 lists 12 other Canadians flagged as “known associates” of Hiva Alizadeh, an Iranian-Canadian who was arrested in Ottawa last August on bomb-plot charges. They too were placed on the “Visa Viper” list, which, among other potential consequences, makes it unlikely that they'll be admitted into the United States. Names on that list would likely be added to central data banks that flag people of concern.

Those two cables alone make clear that 21 people — all of them Canadian citizens or residents of Canada — were placed on U.S. terror watch lists without ever having been charged.

How many more Canadians are on U.S. watch lists because of suspected “association” or “involvement”? Many more is the safe bet.

As preventive tools, terror lists by their very nature use lower standards to flag people than police forces or government attorneys laying criminal charges. But Canadian citizen Maher Arar knows from painful experience what can happen when a name gets into a U.S. terror database.

Arar was arrested at a New York airport in 2002. U.S. authorities then shipped him to Syria, where he was jailed and tortured for about a year.

Arar’s ordeal began when Canada’s RCMP police flagged him to the U.S. as a suspected terrorist because of his “association” with Abdullah Almalki, another Canadian tortured in Syria based on information provided by Canadian authorities. Another judicial inquiry also found Almalki innocent of all suspicion.

The far-reaching consequences of being on a U.S. watch list were more recently made clear Saturday, when Moazzem Begg, a British human rights activist and former Guantanamo Bay detainee, was prevented from boarding an Air Canada flight from London to speak at a Toronto-area conference on Islamophobia.

An Air Canada spokesperson said the airline was legally obliged to enforce the U.S. no-fly list on flights that — in the event of an unexpected rerouting — might enter U.S. airspace.

CSIS has refused to comment on how the name of one of its paid informants ended up on a U.S. terror list. Defense lawyers for the Toronto 18 are demanding to know if the intelligence agency gave the U.S. information about Shaikh’s background that was withheld when he testified at the terror trials, thereby violating the rules of full disclosure.

What’s clear is that information as simple as Shaikh’s birthplace — Toronto — is wrongly given in the U.S. cable as India.

It’s also clear that U.S. officials blame a good part of the terrorist threat they face on a northern border they perceive as dangerously porous — at times even believing, laughably, that those who committed the 9/11 attacks entered from Canada.

In other words, the U.S. watch lists flagging Canadians are sure to get longer.