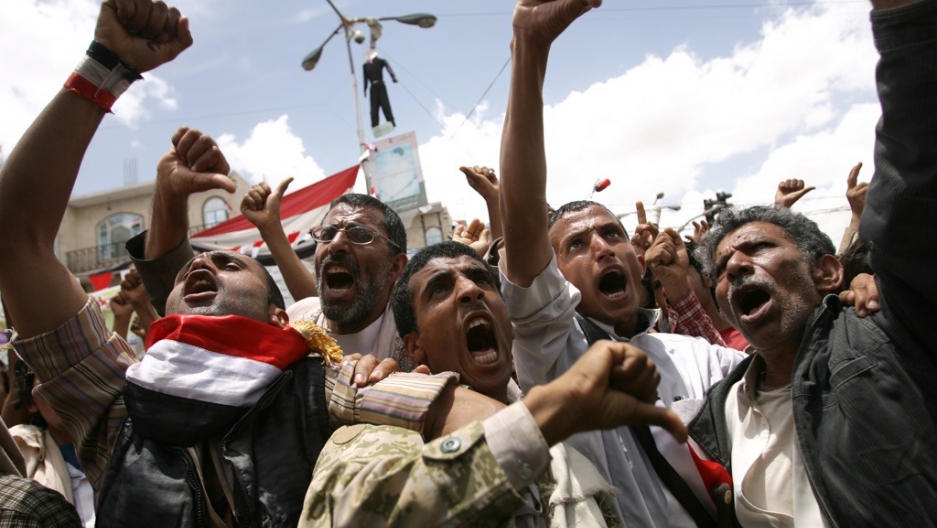 SANAA, Yemen — Government forces shelled the neighborhood where a prominent anti-governement tribal leader lived on Tuesday, escalating a conflict in the capital that began yesterday and that could plunge the country into civil war.

The clashes between anti-government tribesmen and loyalist military forces first erupted in Sanaa on Monday, a day after Yemeni President Ali Abdullah Saleh backed out of a deal to transfer power.

The fighting raged into the night on Monday until tribal mediators called for a ceasefire. But the two sides failed to reach an agreement and, according to local press reports, the fighting began again early Tuesday morning.

In a speech Sunday after he refused sign the agreement, Saleh warned the opposition that they were forcing Yemen into a bloody civil war.

His prediction appears to be coming true.

As gunfire rang out across the city on Monday, opposition tribal forces moved to take control of key government buildings. The anti-government tribesman managed to seize the Ministry of Trade and Industry and the Ministry of Interior was surrounded and under attack from heavy machine guns, rocket-propelled grenades, shoulder-fired missiles and anti-aircraft guns, according to a Yemeni government spokesman.

“The Yemeni government condemns these violent actions. It shows the ill intentions of the al-Ahmar faction, which has been bank rolling the opposition movement and now is using heavy weaponry to attack and occupy government buildings,” the spokesman said.

Sadeq Al-Ahmar, the most senior of 10 brothers who wield significant influence over Yemen’s Hashid tribal confederation, pledged his support for the anti-government movement in March. His denouncements of Saleh followed those of his powerful brother, Hamid al-Ahmar, a millionaire businessman and vocal opposition leader.

In his speech in front of protesters in Change Square, Sadeq Al-Ahmar said Saleh would no longer be accepted among the Hashid tribes. The president is from Sanhan and is part of the Hashid tribal confederation.

The clashes mark a significant turn in Yemen, which has been crippled by a 3-month-old, largely peaceful, protest movement.

Jamal Nasser, a spokesman for protesters, said the movement did not support the Ah-Ahmar family, the other tribes or the country's political establishment.

"The Youth Revolution of Change will never, under any circumstances, use weapons to achieve our goals," he said. "We condemn the violence and hold the Saleh regime completely responsible for it."

Although violence between protesters and government forces, as well between divided factions of the military, has occasionally broken out, this week's clashes pushed the country the closest its been to civil war since the unrest began in February.

“They were taking positions on the roof of a school overlooking the Ministry of Interior,” said Yasser Mohammed Abdullah, 25, referring to tribal opposition fighters, as gunfire erupted just south of his neighborhood.

On Monday, residents ran screaming through the streets to warn bystanders and drivers not to use certain roads that were open to gunfire.

One storeowner, who worked next to the Al-Ahmar home, said that civil war was only a matter of time.

“We expected this. Saleh threatened us with a civil war and the Al-Ahmar family is his biggest enemy,” he said.

As fighting raged on throughout the day, anti-government tribesmen surrounded the state news agency, known as Saba, and were attempting to take it.

“Seven people have been filled so far. We’re totally surrounded,” one employee said.

Farouk Al-Kamali, a journalist working for Saba, was shot in the leg by a mounted heavy machine gun, according to the company’s manager.

“They are shooting at the Ministry of Interior and clearing people out of their homes and taking cover in those houses,” one eyewitness said.

“The Yemenia Airways building near the ministry has been burned to the ground,” he added.

The Yemeni government, outraged with the Al-Ahmar family, condemned that attacks as random acts of violence carried out by an armed mob.

"Reinforcements are being sent to the area to repel the mob," said a Yemeni government official.

The 13 names of those killed in Monday’s fighting were released the next morning. But accurate numbers of dead and wounded are not likely to be revealed.

Al-Arabiya news agency reported that members of the Hashid tribe, which is the most powerful tribe in the country and well-armed with ranks numbering in the hundreds of thousands, were moving south from their stronghold in Ammran toward the capital on Monday.

Sanaa’s northern road is home to a base belonging to some of Yemen’s elite counter-terrorism forces. Armed with high tech weapons and trained by the Americans and British, the hostile Hashid tribesmen attempting to enter Sanaa might have to fight their way in.

Several protesters have reported that loyalist forces have turned back people traveling to Sanaa from the southern city of Taiz, which is the hub of Yemen’s protest movement, and Ammran, which is in the north and is the stronghold of the Hashid confederation.

The Hashid confederation is one of Yemen’s most powerful tribal groupings. Although the confederation itself is fractured, the Al-Ahmar family retains considerable influence.

Defected Gen. Ali Mohsen Al-Ahmar (no relation to the Al-Ahmar family) has yet to bring his rebel First Armored Brigade into the fight. After his defection, the general stated that his troops would only be used to protect the Change Square protest camp in Sanaa.

Gregory Johnsen, an expert on Yemen at Princeton University, said that the clashes could push Yemen’s conflict from peaceful protest movement to civil war.

“Today's fighting between soldiers loyal to President Saleh and tribesmen loyal to Sheikh Sadeq al-Ahmar is a dangerous escalation that threatens to tip Yemen's precarious stalemate towards war,“ said Johnsen.