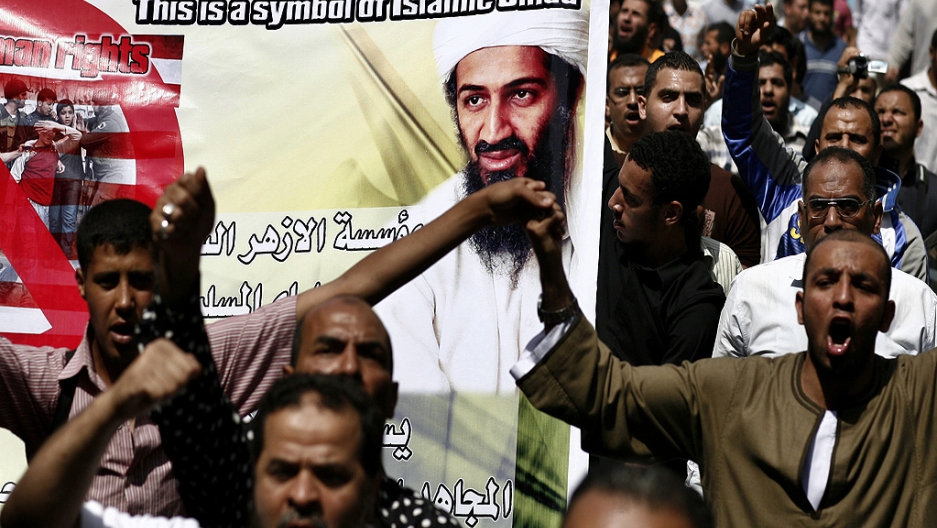 Egyptian Islamists, carrying a picture of slain Al-Qaeda chief Osama bin Laden, march to the US embassy after the weekly Friday prayers in Cairo on May 6, 2011 during a demonstration to denounce the killing of bin Laden by US forces in Pakistan.
Credit: MISAM SALEH
Share

Osama Bin Laden may dead, but don’t count out Al-Qaeda in North Africa just yet.

After a bomb explosion ripped through a Morocco café late last month, killing 17 people and injuring dozens of others, there are new fears that the terror network’s North Africa branch, or Al-Qaeda in the Islamic Magreb (AQIM), is stepping up their operations.

With much of North Africa still entangled in the upheaval and instability caused by popular uprisings in Tunisia, Libya, and Egypt, Algeria has been chosen to lead regional discussions on the creation of an anti-terror “joint task force” of up to 75,000 troops, according to this report by UPI.

Algeria would know, too. The government in Algiers fought a deadly civil war against an Islamic insurgency in the early 1990’s, which led to an estimated 150,000 deaths and further destabilized Algeria.

The top brass of AQIM are believed to be salafi-jihadis who hardened their fighting skills during Algeria’s civil war.  They operate mainly in the vast desert wasteland of the Sahara near Niger, Mali, and Mauritania.

Discussions on the anti-Al-Qaeda fighting force come at a time when AQIM appears to be taking advantage of the regional instability caused by the Arab Spring, most notably in North African's smallest nation - Tunisia.  Tunisia is still recovering from the violent uprising that toppled former president Zine al-Abidine Ben Ali in January.

Authorities there recently apprehended two terrorists near Tunisia’s southern border with Libya. The men were caught with explosives and AK-47s, and admitted to being trained in the mountains of Algeria, according to state media.

AQIM is thought to be behind the deadly bomb blast outside a Marrakesh café in Morocco on April 28.