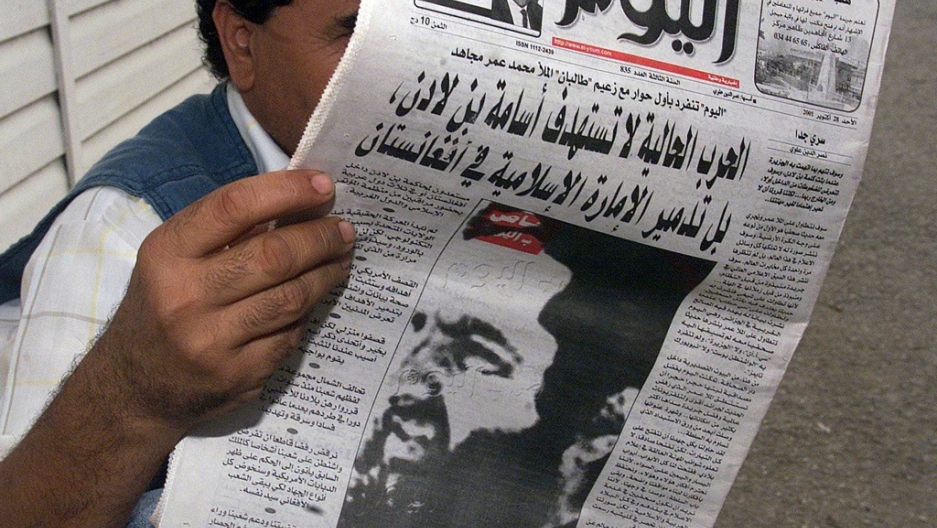 There is considerable speculation that Afghanistan Taliban leader Mullah Omar has been killed. Here, a man reads a newspaper with a photo of Omar on the front page. The newspaper is the Algerian daily El Youm from October 28, 2001.
Credit: Hocine
Share

KABUL – It all started with an “unnamed Afghan official” from the National Directorate of Security (NDS), who apparently told TOLO TV, an independent Afghan station, that Taliban leader Mullah Mohammad Omar had been killed in Pakistan.

The statement by TOLO that set off the storm read: “Taliban leader Mullah Mohammad Omar has been found and killed in Pakistan, a source in the Afghan National Directorate of Security told TOLO news on condition of anonymity. Mullah Omar was shot dead as he was being moved from Quetta to North Waziristan by former ISI chief General Hamid Gul, the source said.”

The Afghan Taliban has firmly denied all such reports, saying that their leader was safe and sound in Afghanistan, where he was directing military operations.

“Claims and rumors were spread this morning by the Kabul stooge regime’s intelligence directorate, other officials and some media outlets that the esteemed Amir ul Mumineen was martyred in Pakistan,” the statement read. “We strongly reject these false claims of the enemy.”

The news triggered a social-media frenzy. Soon speculation wrapped in rumor inside conjecture was flying around cyberspace.

Mullah Omar had been killed in a drone attack; no, it was an airstrike. Other sources claimed that the one-eyed “self-proclaimed Amir ul Mumineen, or “Leader of all the Faithful” was not dead at all, but in Pakistani detention.

The mainstream media remained fairly cool to the topic. The price fetched by the rather unusual hat that Princess Beatrice wore to the royal wedding occupied exponentially more air space than reports of the Taliban leader’s death.

But the Twitterati were in hyperdrive, sending literally thousands of tweets out into the atmosphere. Most reports could be traced back to the original TOLO account, embellished and embroidered as the author saw fit.

Former director of Pakistan’s Inter-Services Intelligence (ISI) General Hamid Gul, reached by reporters in Pakistan, dismissed the reports that he had anything to do with Mullah Omar’s death as “rubbish.”

“I never met Mullah Omar, not even once in my life,” he told AFP.

He reportedly told other sources that he was in Murree, a resort town in the hills above Islamabad, with his wife, and had no information about the Taliban leader.

Lutfullah Mashal, spokesman for the NDS would not corroborate the information, either.

“No high-ranking source in the NDS has confirmed this news,” he told colleagues, debunking TOLO’s story. But he would not go so far as to say that Mullah Omar was alive.

“Taliban leader Mullah Mohammad Omar disappeared from Quetta, Pakistan three or four days ago,” he said at a press conference Monday afternoon. "Our sources and senior Taliban commanders have confirmed that they have not been able to contact (him)."

Mullah Omar has been “hiding” in Quetta, Pakistan, with a $10 million-dollar price on his head, ever since he escaped from southern Afghanistan on the back of a motorcycle in early 2002.

In contrast to Osama bin Laden, whose whereabouts were supposedly unknown to the Pakistani authorities and the United States until shortly before the May 2 operation that killed him, Mullah Omar was always presumed to be in Quetta, a city of some 900,000, approximately 120 miles from his former base in Kandahar, Afghanistan.

The Afghan Taliban leadership was called the “Quetta Shura.”

Nevertheless, Mullah Omar has stayed out of sight until now.

Following the death of Osama bin Laden, and the accompanying deterioration in U.S.-Pakistan relations, rumors hit the blogosphere that Pakistan was trying to nudge its troublesome guest back to his native land. Some speculated that the Pakistanis were trying to rehabilitate their standing with an increasingly skeptical United States by giving up the Taliban leader’s location.

At present, no one is certain of Mullah Omar’s fate. An inside Afghan government source said Mullah Omar had really been missing for ten or eleven days.

“We think he is in Pakistan’s custody,” said the source. “He may or may not be dead.”

Pakistan denies any knowledge or involvement, and even the Pakistani Taliban washed their hands of the matter, telling Pakistan’s Geo TV that the rumors of Omar’s death in Pakistan were simply not true.

The international forces have largely stayed out of the fray. General Josef Blotz, spokesperson for the International Security Assistance Force (ISAF) told reporters Monday morning that he would not be drawn into speculation about the fate of the Taliban leader.

“We need to wait (for confirmation),” he said.

But by day’s end, the picture was more confused than ever. BBC journalist Bilal Sarwary reported that their office was getting phone calls from Afghan officials desperate for some hard information.

But the last word is with the NDS spokesman Lutfullah Mashal: “We hope he is dead, but we cannot confirm it.”