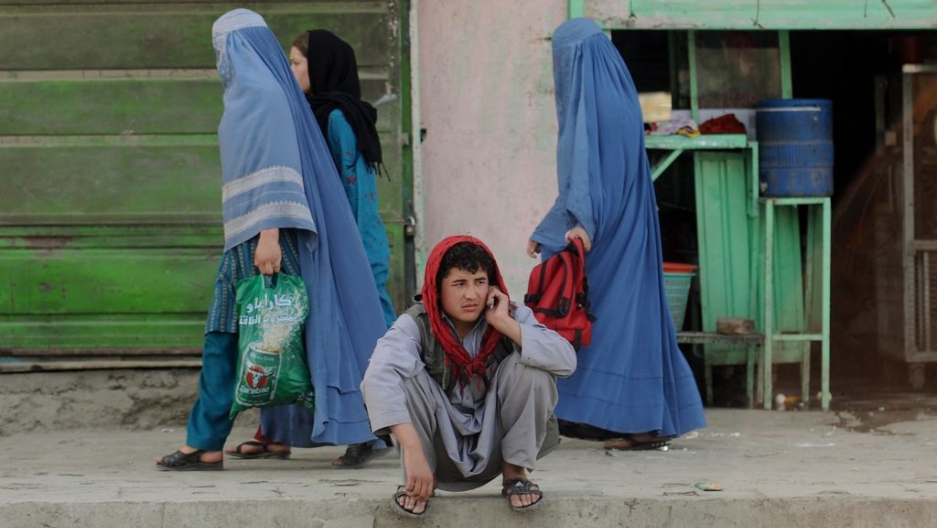 An Afghan man speaks on a phone as burqa-clad women walk past on a street in Kabul on May 20, 2011.
Credit: Punit Paranjpe
Share

KABUL, Afghanistan – The post was no more than 140 characters long, but for international media following the war in Afghanistan, it spoke volumes.

The figure of six foreign troops dead was inflated, and it was followed by a broken hyperlink to the Taliban’s equally ragtag website. But the post was to be the first of now dozens of tweets by Taliban insurgents in English, indicating that an organization once made infamous for outlawing music and burning television sets is embarking on a new era of media sophistication.

In addition to tweeting in English, as well as their native Pashto, the Taliban are making a concerted effort to build the movement’s media capabilities in this crucial make-or-break year for the war in Afghanistan.

The group already maintains an official website, under the banner of the “Islamic Emirate of Afghanistan,” where they provide press releases and updates in Pashto, Dari, Arabic, Urdu and English. Their Twitter account, @alemarahweb, now has almost 5,800 followers.

Recently, they also launched a series of savvy and complex media operations in the wake of major Taliban attacks, in some cases providing information more swiftly than their well-funded NATO rivals.

NATO, unaware of the bust and pushing its own media message about the success of the surge, scrambled to respond.

“This is a war of propaganda, and the Taliban are learning how to win that war,” said Jawed Hamim Kakar, regional editor at Pajhwok, an Afghan news agency. “If I can’t reach the Taliban by phone, they send an SMS. If there is no SMS, they send an email. One of the Taliban spokesmen even sends me alerts on Facebook.”

The Taliban also show remarkable discipline in the distribution of a unified message, which the movement’s leaders make available through two spokesmen — Zabiullah Mujahid and Qari Yousuf Ahmadi — but who are actually a conglomerate of Taliban media assistants operating under the two pseudonyms.

Following the death of Osama bin Laden, once an honored guest of the Taliban, earlier this month, the group’s spokesmen refrained from speaking with journalists until the leadership had approved a formal statement.

From the field, Taliban foot soldiers describe a stringent information chain-of-command where low-level fighters contact operational commanders with news of successful operations. The reports are then passed on to the Taliban media office.

Responding to a recent inquiry about the Taliban’s involvement in the opium trade, a regional insurgent commander in Helmand province told a local journalist: “The [Taliban] spokesmen said if I answer any questions about the resistance and the poppy harvest, they will personally have words with me.”

The commander then abruptly hung up.

But other Taliban fighters are more candid when reflecting on how the image of their movement has morphed from one of illiterate cave-dwellers to that of tech-savvy, 21st century guerilla fighters. Using Western-made technology to promote jihad is permissible, too, they say.

“Mobile phones, the internet, television — all of these were invented by the West, but Islam allows us to use it within the boundaries of our religion,” one Taliban fighter, speaking from Pakistan via Google Chat, said this week. The fighter had chosen a broken heart for his Google Chat icon.

“Right now, satellite internet is important for the mujahideen,” the fighter said. “And because we are using it to fight the infidels, it is okay.”

Not all are impressed with the Taliban’s new media prowess, however.

“We request those foreign journalists who cover Afghanistan to stop promoting Taliban propaganda by giving credibility to their lies through sharing their tweets,” the opinion piece read.

The Taliban have been responsible for the deaths of thousands of Afghans. The United Nations pegged them as causing the lion’s share of civilian deaths in Afghanistan last year.

“By using twitter for spreading lies and propaganda, [the] Taliban do not become superior online,” the editorial continued. “Indeed it doesn't make a difference at all, for common Afghans, other than foreign journalists and Afghans living abroad.”

The International Security Assistance Force (ISAF), the umbrella organization under which NATO operates in Afghanistan, also took a jab at the Taliban’s newfound Twitter fame.

“What’s that? Taliban’s tweeting in English? Lies are lies no matter the language,” ISAF posted on its official Twitter account, @ISAFmedia.

“Now following ISAFmedia, let’s see what lies they are propagating,” one of the Taliban’s official Twitter feeds, @ABalkhi, fired back – in English.