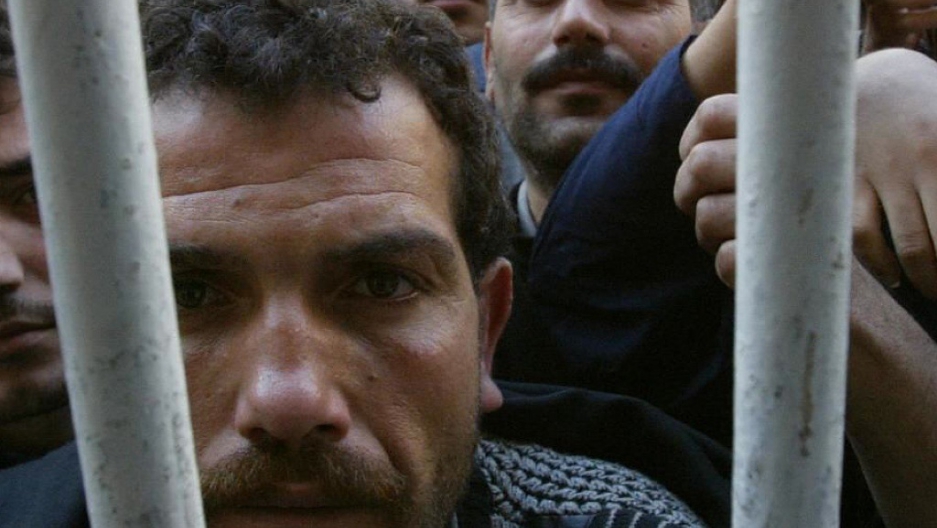 Syrian prisoners stage a protest and a hunger strike at a prison near Damascus in 2005.
Credit: Louai Beshara
Share

Editor’s note: All names of prisoners interviewed for this story have been changed for their safety.

BEIRUT, Lebanon, and DAMASCUS, Syria — For Ali, the beatings began even before the bus reached the prison.

“Are you with the Salafis and the Muslim Brotherhood?” screamed one of President Bashar al-Assad’s secret policemen.

The fist landed square in his face as Ali tried to explain that the small group of protesters rounded up in Mezze, a suburb of Damascus, last month after chanting for freedom were not fundamentalist Islamists.

Then his captors saw from Ali’s ID card that he was the same sect of Shia Islam as Syria’s president and the Assad family that has imposed a dictatorship on the country for 41 years.

“You are Allawite and you don’t like Bashar?” Another fist to the face.

The bus pulled into the notorious Air Force security branch in Bab Touma, a stone’s throw away from Damascus’ Old City, where the last few tourists still in the country were enjoying the sights.

Ali’s interrogator had footage from the protest filmed on a phone, showing Ali chanting for freedom. “He got up and walked behind me, grabbed my hair and slammed my face into the table,” Ali said in an interview. “He was really angry.”

Ali’s hands were tied behind his back while he was punched in the face repeatedly. “He told me to confess I was there, and who had organized it, and was it someone from outside Syria?”

Blindfolded, Ali was driven to another prison where, still unable to see, he was beaten, pushed down a flight of stairs and had cigarettes stubbed out on his back.

The popular uprising in Syria began in mid-March with the torture of several children: 15 boys, aged between 10 and 15, from Daraa, who were beaten and had their fingernails pulled out by men working for Gen. Atef Najeeb, a cousin of President Assad.

Two months into the most serious challenge to the Assad dynasty in history, a campaign of mass arrests across Syria has seen at least 8,000 Syrians arbitrarily detained and thrown into prisons, according to a count by activists contacting detainees’ family and friends. Insan, a leading Syrian human rights organization, puts the numbers detained at 11,000.

The higher figure nearly triples the number of political prisoners the Syrian Human Rights Committee estimated were being held in Syria in 2006.

The detained include a wide cross section of society — mainly young men between 20 and 50, but also children and the elderly, and especially activists and those involved in protests or seen filming them, as well as community leaders, imams and students.

In Daraa alone, state news reported some 500 people were arrested on May 1. Security forces went door to door seizing any male aged between 15 and 40.

The sheer scale of the crackdown has left jails in some key cities full to bursting.

In Banias, a strategic oil refining port on Syria’s Mediterranean coast, prisoners were being held in the power station and a sports stadium because all the city’s jail cells were full.

One of the detainees in the Banias power station, a student, screamed out what he thought his interrogators wanted to hear as fists and boots and sticks pummelled his body and bloodied his face: “Bashar is God! Bashar is God!”

It worked. The secret policemen grew tired of beating him for the day and threw him back into the makeshift cell.

The respite was short-lived. Handcuffed by his wrists and ankles and blindfolded, the student, who gave testimony to a trusted local activist on condition of anonymity, was led to a car and driven to another torture cell.

“I was being beaten all over my body. I was bleeding and was saying the shahada to myself, ‘There is no God, but God,’ because I thought I was going to die at that moment,” he said.

Arrested on April 12 while travelling from Banias to his home village on the outskirts of the city, the student was released after only a few days.

But the message to the wider community of Banias was clear: A naked body, covered in blood, left to limp along the long road back to his village, clutching his broken hand, for all to see.

Three other young men, beaten, thrown down stairs and forced to drink water from a toilet after being starved, were also dumped naked and bloodied on a road outside Banias.

A YouTube video, claiming to have been shot in Banias but which cannot be independently verified, shows men with signs of severe beating on their backs and faces.

“Syrian security is now releasing detainees with unhealed wounds caused by torture in order to spread panic and fear among people, hoping it will reduce the numbers participating in demonstrations,” said Wissam Tarif, director of Insan, which has documented cases of torture.

In interviews with 19 Syrian detainees last month, including two women and three teenagers, Human Rights Watch found that all but two had been tortured, including being whipped with cable and stunned with electric-shock devices while drenched in cold water.

Amnesty International reported cases of detainees forced to lick blood off the floor of a prison and others who also drank toilet water after being starved for three days.

Insan said it has received numerous reports of torture where detainees have been left naked in groups for hours, doused in cold water before collectively being beaten.

President Assad signed Syria’s ratification of the Convention Against Torture and Other Cruel, Inhuman or Degrading Treatment or Punishment in 2004.

Arrested from his Damascus home in late March, Abu Mohammed, a journalist, was taken, along with his laptop and mobile phone, to a branch of Internal Security on Baghdad Street, where he also witnessed mass arrests and beatings of protesters.

“We were hundreds so it was hard for interrogators to deal with us. They are used to tens being arrested at a time, not hundreds,” he said.

A journalist for London’s The Times newspaper witnessed mass arrests in Syria’s central city of Homs last week, while an Al Jazeera English reporter this week recounted hearing young men being severely beaten while she was held in a Syrian prison.

For the next 16 days Abu Mohammed was subjected to the same routine: Dragged into an interrogation room and punched in the face

“The interrogators were simple and uneducated men, they just shouted at me and hit me if I disagreed. They didn’t know what they wanted,” he said.

The journalist was asked for his email address. “He asked me what ‘Hotmail’ means. I answered in a simple and direct way. The main thing I realized was to answer what they wanted to hear, not what I thought.”

Like the father from whom he inherited power, Assad has sought to crush the uprising against him with force and mass arrests.

During a campaign of repression against the Syrian Muslim Brotherhood in the 1980s under late President Hafez al-Assad, some 17,000 Syrians disappeared, according to testimony to the United Nations Human Rights Council by Radwan Ziadeh, head of the Damascus Center for Human Rights Studies.

In the 2-month-old uprising, Syrian security forces have killed between 700 and 850 people, according to human rights groups, killing 27 more during an attack on Talkelakh, a town near the border with Lebanon that began last Saturday.

On Wednesday, the Syrian president was targeted for the first time by U.S. financial sanctions, a significant increase in American pressure coming just five days after Secretary of State Hillary Clinton repeated her position from March that Syria’s regime still had an opportunity to reform.

In a much-anticipated speech Thursday outlining U.S. policy toward the Middle East in the wake of the Arab democratic uprisings, U.S. President Barack Obama warned Assad that he must either lead Syria through a democratic transition or “get out of the way,” the first public indication that Washington is considering a post-Assad Syria.

After eight days in a windowless two-by-two-meter dungeon deep underground, Ali was freed without charges. His wallet, with half the money stolen, was returned. He was too weak to drive home so he took a taxi to a friend’s place, too ashamed to let his parents see.

“The worst is you don’t know what will happen. You and your family have no idea what is going on,” said Ali who, despite his experience, remains unbowed.

“I have seen personally the real ugly face of security, and it is much uglier than I thought. I will protest again because now I really realize what freedom means. If we give up now we will all be arrested again anyway.”