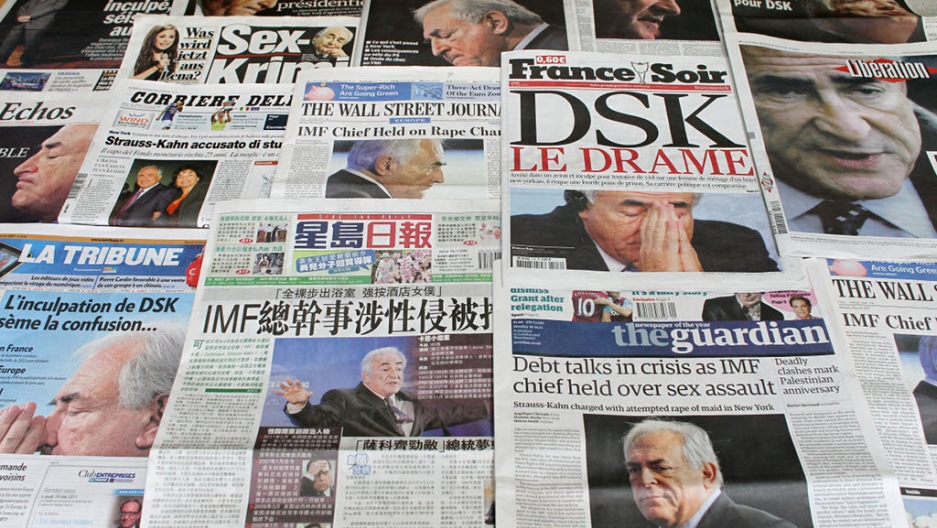 The front pages of French and foreign newspapers on May 16 in Paris, showing IMF chief Dominique Strauss-Kahn, who has been indicted for allegedly sexual assaulting a 32-year-old chambermaid from Guinea at the luxury Sofitel hotel near New York's Time Square.
Credit: Thomas Coex
Share

BOSTON — Here’s a story that illustrates the chasm between how France and America handle men, women and rape.

The French elite are outraged over what they see as American vulgarities surrounding the treatment of Dominique Strauss-Kahn, the former IMF chief and putative 2012 presidential frontrunner, accused of raping a 32-year-old Sofitel chambermaid in Manhattan last weekend.

Despite their outrage, the French press is blatantly committing what American journalists regard as a cardinal sin of rape coverage: violating the anonymity of the alleged victim.

Paris Match — a major society magazine positioned somewhere between People Magazine and Vanity Fair — has published her name, in a banner headline that translates as "[name withheld], the one who caused DSK's downfall."

The Paris Match article begins, "No one has seen her yet." It notes that the U.S. media declines to identify the accuser, to ensure her security and privacy. Then it proceeds, at first, as a sympathetic profile of the “shy and discrete” maid, reporting that the Sofitel where she worked rated her a 4.5 out of 5, and was “totally satisfied with her work and behavior.” It quotes a friend as saying that she's a "good mother" who seems "afraid of people" — perhaps because she’s been mistreated. "She was very scared of her neighbor's dogs, and she didn't say hello unless someone said it to her," said the friend, who insisted that she couldn’t possibly have lied about the encounter with Strauss-Kahn.

Paris Match’s correspondent then delves into the prurient: what does this alleged femme fatale look like? "Physically, the testimonies diverge," the writer, Marie Desnos states. She recounts that Strauss-Kahn's lawyers regarded the accuser as "not very alluring," (“tres peu seduisante”) but goes on to quote locker-room worthy hearsay from "an Indian taxi driver named Sony" on details of her physique.

Le Monde, one of France's most respected newspapers, also published both versions of the woman’s name, Guinean and American, in a 1,000-word profile titled “[first name withheld], victim without a face.”

Le Monde observes that Strauss-Kahn’s lawyers are not permitted to contact the woman without permission from the authorities, but it’s fine for them to thoroughly investigate the woman and try to discredit her testimony. The writer, Marion Van Renterghem, reports various details of the accuser’s life. It cites people who know her as insisting she isn’t infected with the AIDS virus, despite a New York Post article indicating that she lives in housing dedicated to HIV patients. And it reports that a man who has identified himself publicly as her brother is actually her boyfriend, according to a friend of the accuser.

Meanwhile, French journalists are chasing down a photo of the accuser, so far without success. The Nouvel Observateur, a major news magazine, calls her "the French press's most sought after woman," noting that "media storm detests a void."

In the absence of a real photo — other than one in which she's leaving a Harlem police station covered in a white sheet “like a ghost” as Le Monde put it — the Nouvel Observateur ran an article about the fake images circulating on the internet. No doubt, it's a drama for the women depicted, and a moment of journalistic shame for certain French publications who succumbed to the temptation to publish without verifying first.

One photo appeared on a Facebook profile for the chambermaid; the profile was discovered to be a fake, but not until it was published by a provincial French newspaper, the magazine notes. Another came from the Facebook page of a New York real estate agent hapless enough to have the same name — the magazine states that it is a common name in West Africa. In a post confirming that she wasn’t the accuser, the woman states “yesterday, all this was amusing, but today it’s annoying.” She goes on to state that she reserves the right to file a lawsuit against anyone who publishes the photo.

A third picture — "identified variously as the victim or her daughter" – shows "a radiant young woman," the magazine states, whose photo has circulated widely in Africa, without positive confirmation of her identity.

A final photo requires the biggest leap of faith. It shows a woman at a formal dance, posing in a long black evening gown beside her husband, who wears tux and top hat — an image of wealth and comfort that contrasts dramatically with what we know of the accuser's background. The Nouvel Observateur reports that the photo was actually taken in 1975, and depicts a famous Senegalese writer with the same first and last name as the accuser, but a different middle name. The photo's caption: [name withheld] arrives in New York.

If Google News is any indication, it appears that the language barrier, coupled with the English media's almost universal adherence to the tradition of not publishing a sex crime accuser's name, has largely ensured that the woman's name remains anonymous in the United States, even if photographers have gathered at her apartment building and at the cafe where her boyfriend or brother works.

Still, the French fury over images portraying Strauss-Kahn as a criminal stands in stark contrast to the Paris media race to out the accuser.