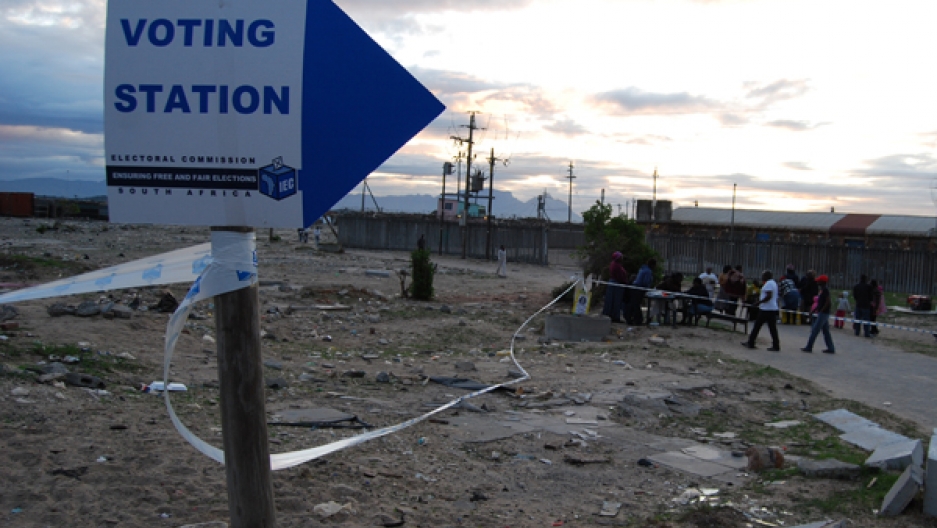 Share
In the township of Khayelitsha, a large crowd gathered on the side of the road. They waved black, green and yellow flags, held political signs, and sang a traditional protest song. They're supporters of the ANC, South Africa's ruling political party. ANC has been in power since 1994, when Nelson Mandela won the country's first democratic elections. It's won every election since then by a large margin. "The ANC is the party that took South Africans from the era of apartheid, and they still have faith that if ANC has a chance to govern, ANC can take them somewhere," said Xolisa Peter, a member of the ANC Women's League who lives in Khayelitsha. Across the road stood another group of people, holding blue signs, and singing nearly as loud. They're members of the DA, or Democratic Alliance, a party made up of ANC rivals. Just a few years ago, the ANC had no significant political opponents. That was especially true here in Khayelitsha, a black township with high rates of unemployment and poverty. But growing numbers of black people here and across the country have begun switching to the DA. That's despite the fact that most DA supporters are white or mixed race. Michelle Namba, who wore a blue DA t-shirt and held up a sign, said she used to support the ANC, but no longer. "I was in ANC, but I didn't see any improvement there. Our president promised us everything, but he didn't do anything for us. That's why I quit," Namba said. She's referring to President Jacob Zuma, head of the ANC. Namba said the DA's leader, Helen Zille, a former mayor of Cape Town, delivered on a promise to build homes in her neighborhood. "She's my mother now. She did everything, she promised to give us the houses, but I see the 60 houses she gave us — that's why I like her," Namba said. The Service Delivery Elections South Africa's municipal elections have been dubbed the "service delivery elections." That's because South Africans have expressed outrage over a lack of basic services — things like housing, drinking water, and electricity. South Africa boasts the largest economy in Africa, yet millions of South Africans — mostly black — still live in wooden shanties. Last year, protests erupted here in Khayelitsha when the local government installed public toilets, but didn't build shelters around them. Residents were forced to drape blankets over themselves for privacy. Peter said that marked a low point in the government's performance. "It's very bad," Xolisa said. "It reminds us in the very far history, in the Eastern Cape, where our people used to sit in the open fields, where there were no services in the apartheid regime, where we used to fetch waters from the rivers, far distances, and for women it is really very bad." It's true there are problems, said Hitler Mdoda, a member of the ANC who lives in Khayelitsha's Ward 92. But he added that the ANC is still the party to fix them. "There are areas where there are some problems," Mdoda said. "As ANC, we don't deny that. But, as ANC, we are saying, we are going to change that." Election results are still being tallied, but early reports from Wednesday's local elections suggest that the DA captured nearly 25 percent of the nationwide vote. That's up from just over 16 percent in 2009, and 12 percent in 2004. The DA also nearly tripled its number of black supporters since the last election, making it the only party with nearly equal numbers of black, white, and mixed-race voters. Michelle Namba, who held a blue DA sign, said a lot of people in South Africa think that black South Africans should vote for the ANC just because they are black. But she doesn't agree. "We mustn't go with a color, black or white," she said, adding that if someone delivers on their promises, they deserve her vote.