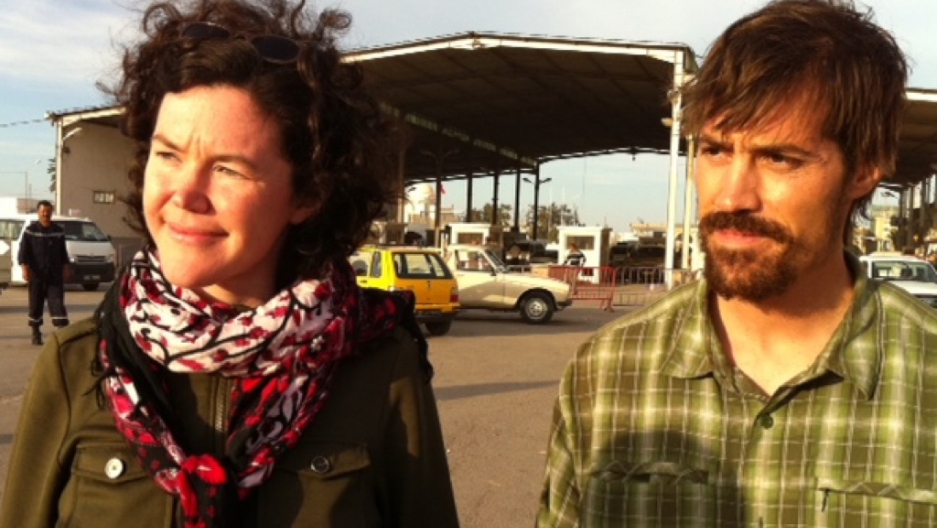 DJERBA, Tunisia — American journalists James Foley and Clare Gillis were relieved and in good health when they crossed the border into Tunisia Thursday, six weeks after they were first detained by forces loyal to Libyan leader Muammar Gaddafi.

But celebrations were tempered by the absence of their colleague Anton Hammerl, the South African journalist they had been traveling with in the days before their capture.

Foley and Gillis told GlobalPost in an interview Thursday night at their hotel in Tunisia that Hammerl had been shot by Gaddafi forces while the group reported on the outskirts of Brega.

Foley, Gillis and Hammerl, as well as Spanish photographer Manu Brabo, arrived at the rebel-held front lines early in the morning on April 5, Foley and Gillis said. They said they were planning on spending the night in a rebel camp just east of Brega along the coastal highway.

When they first arrived at the front lines, the journalists heard reports that pro-Gaddafi forces were dug in nearby. The reporters decided to exit the car before the rebel soldiers they were traveling alongside pushed ahead.

But within seconds, the rebels whipped around in full retreat. In front of them — barreling towards Foley and the other journalists — were two armored Libyan military trucks carrying 10 pro-Gaddafi troops. They were all firing AK-47s over their heads.

"It all happened in a split second. We thought we were in the crossfire. But, eventually, we realized they were shooting at us. You could see and hear the bullets hitting the ground near us," Foley said.

All four journalists immediately dropped to the ground, diving to the side of the road. But the Libyan soldiers, who were coming over the hill, continued to fire, Foley said. Hammerl, who was closest to the fighting, cried out for help. Foley called out, "Are you OK?"

"No," was Hammerl's only reply. After the third barrage of fire, Hammerl's cries ended.

"I thought instinctively that we were all going to get killed, so I jumped up to surrender and screamed that we were journalists," Foley said.

As he jumped up, he was punched in the face and dealt several blows with the butt-end of an AK-47 in the jaw and head. Brabo and Gillis were also punched.

The three were then handcuffed with electrical cords and tossed into the cab of a nearby pickup truck.

Just before they were captured, however, Foley saw Hammerl's limp body lying in the sand. He said Hammerl was shot in the abdomen and was bleeding severely.

While in captivity, Foley said the three journalists wrestled with how to communicate the news of Hammerl's death to his family.

"We knew collectively that if we spoke about Hammerl's death while we were detained, then we would be in greater danger ourselves. But now that we're free, it's our moral imperative to tell the story of this great journalist and father," he said.

Foley and Gillis informed Hammerl's wife, Penny, of the news by telephone after they had safely crossed the border into Tunisia. Hammerl's family released a statement shortly after.

"Words are simply not enough to describe the unbelievable trauma the Hammerl family is going through," the statement read. "From the moment Anton disappeared in Libya we have lived in hope as the Libyan officials assured us that they had Anton. It is intolerably cruel that Gaddafi loyalists have known Anton’s fate all along and chose to cover it up."

Foley, a reporter for GlobalPost, and Gillis, who has written for The Atlantic and USA Today, arrived in Tunisia Thursday evening after being escorted to the border by Hungarian diplomats. Brabo crossed the border with Spanish officials earlier in the day.

A fourth reporter, British national Nigel Chandler, was also released at the same time. He was captured in Bin Jawaad at the beginning of March.

"It's an amazing feeling of freedom to be in Tunisia. Just to be able to walk to a car and know that we're not going to another detention center or trial is a relief," Foley said earlier on Thursday, just after he first crossed the border.

"Talking with my dad was a visceral sense of joy. I'm humbled by the tremendous support of my friends and family. Last night was the first time I've been on the internet in 44 days — and to see what everyone has been doing for me is just amazing."

Speaking to her editor at USA Today, Gillis said, "I feel fine and I'm so happy to be on the other side where I can talk freely."

In a phone call to his mother in New Hampshire on Wednesday, Foley said that he was glad to be finally out and "just wanted to get home."

“We were overjoyed to get a telephone call from Jim shortly after his release today in Tripoli. He told me he was well and looking forward to coming home,” said his mother, Diane Foley. “We are extraordinarily grateful to the many people who have worked on his release and we hope to have him home as soon as possible.”

Foley, Gillis and Brabo languished in a series of detention centers in Tripoli for weeks, during which time the Libyan government allowed them little to no communication with the outside. News that their release was imminent first came after the ambassador to Hungary, which is one of the last countries to still have an embassy open in Tripoli, was allowed to visit the jailed journalists about two weeks ago.

Moussa Ibrahim, a spokesman for the Libyan government, told reporters Wednesday that the four journalists were detained because they had entered the country illegally, presumably for not having valid visas. Their final court appearance, he said, took place on Tuesday.

Ibrahim had told the Associated Press on Monday that their release was delayed partly because a NATO air strike had damaged buildings belonging to the Justice Ministry in the capital.

“We are overjoyed that James and Clare and Manu are at last free after 45 days of captivity in Libya. This has been an extraordinary ordeal and we are very proud of them for their courage and endurance under most difficult circumstances," said GlobalPost President and CEO Philip S. Balboni.

"We are also deeply saddened by the news of the tragic death of Anton Hammerl, their friend and colleague, at the hands of Libyan government forces. I want to express our deepest sympathy to Anton’s wife, to his family and to his many friends. He died in the service of a profession he loved and he will be long remembered.”

Foley was allowed one phone call during his detention and Gillis two. Both reporters, who are both American, told their families at the time that they were in good condition and being treated well. After a visit with the reporters, the Hungarian ambassador confirmed that they were all in good condition, in the same safe house, and were being treated well.

Libyan authorities had originally given the impression that the reporters would be held for only a matter of days. But as the days stretched into weeks, and the conflict in Libya grew more chaotic, so too had concerns for their well-being.

Their situation was complicated when the Turkish government, which had been one of the only channels of communication with the Libyans, closed its embassy in Tripoli earlier this month and called for Gaddafi to step down. It was Turkish diplomats in Tripoli who managed to secure the release of four New York Times journalists detained in March.

After the Turks left, the Hungarians stepped in to help and were, in the end, instrumental in securing their release.

As their detention dragged on, a movement calling for their release, led by friends and family, grew in numbers. More than 30,000 people have signed a petition appealing to the Libyan authorities to release them.

Supporters have also been holding regular vigils and rallies to draw attention to their detention, most recently one in New York City on Sunday that was attended by both David Rhode, a New York Times journalist who was held captive by the Taliban in 2009 for seven months, and Tyler Hicks, who was one of the New York Times journalists captured by Gaddafi forces in March.

Covering the Libyan conflict has proved dangerous for journalists.

A number of Libyan journalists are missing and several foreign journalists remain in custody, Human Rights Watch said. And in addition to Hammerl, several other journalists have also been killed while covering the fighting, including British photojournalist and filmmaker Tim Hetherington and American photographer Chris Hondros. The two were killed in April during clashes between rebels and government forces in the Libyan city of Misurata.