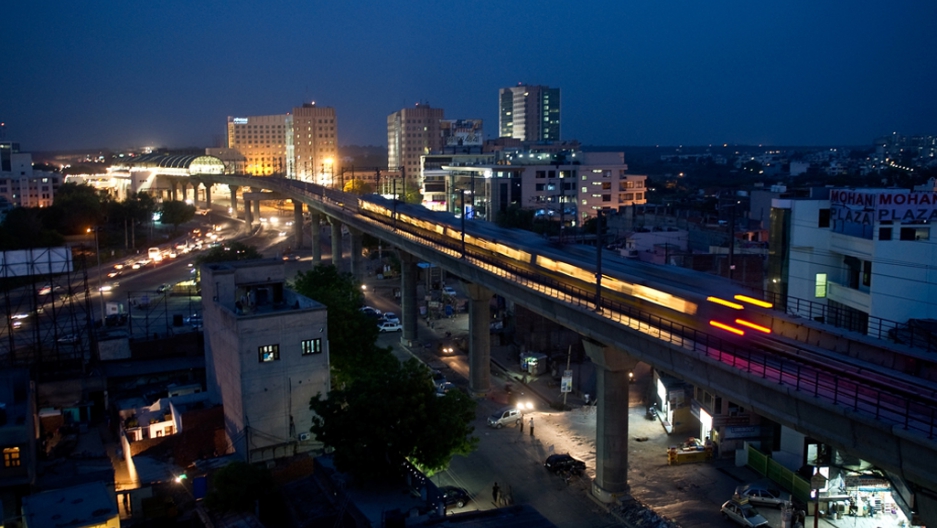 NEW DELHI, India — At the tail end of rush hour on a typical Monday morning, commuters stream out of the Delhi Metro station at Nehru Place, a teeming shopping district.

The station is a gleaming, mirror-finish high-rise, and the commuters in their office garb and ladies in saris stride out of it in brisk, orderly fashion; no shoving, no shouting, and no spitting.

In any other Asian city — Hong Kong, maybe, or Singapore — the rush-hour scene at the Metro would be nothing remarkable. But this is Delhi, where the few things that work the way they're supposed to — the mobile phone networks, pizza delivery and the five star hotels — stand out as exceptions.

And the Metro, a government-run project, has been, since the first line opened for business in 2006 under budget and three years ahead of schedule, something of a miracle. Five years later, with the third phase of a four-stage construction schedule, the system has upheld that high standard — and promises to be bigger than the London Underground when it's finished in 2021.

"When the new stations were built, I just went there to see how they looked," said Sajjad Mohammad, a 26-year-old aspiring screenwriter who uses the Metro to commute to Delhi from the satellite city, Noida, across the Yamuna River.

"It's good to see public property that's nicely designed — not like the regular trash that Delhi has."

In a city where nothing is ever finished, and everything is under repair — broken concrete and rebar flung haphazardly on the roadside rather than carted away when a job is "finished" — the Metro is just about the only public facility where the label "world class" reflects reality.

But the achievement is bigger than that. From punctuality to cleanliness to civility to rule enforcement, the government-owned Delhi Metro Rail Corporation is rapidly transforming a city that most foreign visitors, frankly, dismiss as a rude, aggressive basket case.

To be sure, the problem isn't licked yet.

Despite better safety standards than are typical for India's construction industry — a Metro project is one of the few sites where workers wear hard hats — more than 100 people, including 93 workers, have been killed by accidents since the project began in 1998.

At least one study has shown that the Metro's impact on non-riders — especially the very poor — has been negative. Construction has displaced people and the more costly train system has in some places caused the government to reduce the number of buses.

There is still a big gulf between the showpiece stations at upscale destinations like Khan Market — a shopping area popular with the elite — and less glamorous stops in lower middle-class neighborhoods. And regular riders complain about overcrowding during peak hours.

But according to a recent study by the government's own Central Road Research Institute, the Metro has already kept some 160,000 vehicles off the roads, easing congestion and cutting greenhouse gas emissions, and eliminated more than 100 fatal road accidents per year.

And while those figures are debatable, the new addition to Delhi's public transport system has undeniably acted as a stimulus for urban renewal and reduced the pressure on residential and commercial hot spots by creating a new logic for real estate development.

Property prices near stations have increased by 22 percent or more, far-flung residential areas have become viable overnight, according to a study by the Gujarat-based Center for Environment Planning and Technology.

"The connectivity is so quick and the trains are so clean and so cool. It’s so easy to commute to the main city of Delhi," said 41-year-old Sanjana, who commutes to her job at an economic think tank from the satellite city of Gurgaon each morning.

"It's changed what it's like to live in Gurgaon. You no longer feel that you're living in a different city," she said.

And even the city's moribund colonial center, Connaught Place, has begun to re-emerge as an entertainment and shopping destination since the Rajiv Chowk — a central interchange point — became the network's busiest station.

That said, the Metro's biggest impact might be cultural.

In almost every other facet of life, India's rapid growth and associated modernization has widened the gap between economic classes. No one who earns more than $200 a month takes the bus, and the focus on infrastructure for the car-driving rich — flyovers and cloverleafs to unsnarl routes between commercial hubs — has exacerbated the rift, forcing the poor to dart across "signal free" thoroughfares between speeding cars.

In contrast, although it's still out of reach for the destitute, the Metro throws people from virtually all walks of life together — a tiny egalitarian island in a city of self-professed VIPs throwing their weight around.

"It’s an absolute mix of people and there is no issue whatsoever," said Sanjana, noting that the Metro has eschewed the Indian Railways' system of first-, second- and third-class compartments.

"Your plumbers and electricians and blue collar workers are taking it, and there’s no hesitation. People will open up their laptops and work and there may be someone from a completely different background sitting next to them."

For the seasoned Delhiwallah, the experience can be almost eerie. At peak rush hour, train compartments are silent, but for the trilling of the occasional mobile phone. The roadways' ubiquitous altercations are almost unknown, and for women passengers, peer pressure successfully curbs the dreaded routine of catcalls, harassment and groping referred to locally as "eve teasing."

"They are used to these open buses where they can spit out the window and push people around and pick fights," said Mohammad.

"But you put them in a modern, air-conditioned environment, and suddenly there's this whole thing about matching up to the environment. If there are two or three people traveling together, they don't even talk. The moment they get out of the station they start to talk again. It's really funny."