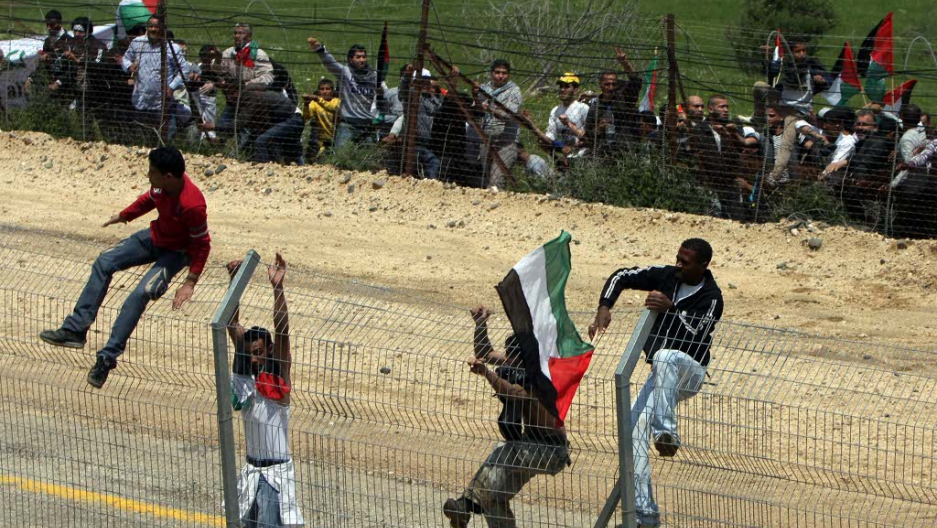 Palestinian protesters infiltrate the Israel-Syria border on May 15, 2011. At least twelve people were reported killed and several injured when IDF soldiers open fired on protesters attempting to cross the Syria-Israel border. Palestinians were demonstrating the establishment of Israel in 1948, termed 'Nakba Day.'
Credit: Jalaa Marey
Share

Floods in the U.S. heartland and drought in Western Europe are threatening to transform the Arab spring into a long, hot summer, according to a fascinating article in today's Wall Street Journal (subscription required).

The article notes that wheat prices — which had skyrocketed in late 2010, just before the Jasmine revolutions began — are now rising even higher. The cost of a bushel jumped 7 percent on Wednesday. It's up 91 percent in less than a year. Unusual weather in Midwest and Europe is to blame, as the markets get concerned that harvests will underperform.

Why does that matter? Because Arabs live on bread, couscous and noodles, and the government picks up much of the tab for its impoverished populace. "Tunisians eat more wheat than anyone on the planet: 478 pounds per person a year, compared to 177 pounds in the U.S. Egyptians and Algerians also eat more than twice as much wheat as Americans, says the U.N. Food and Agriculture Organization," the Journal reported.

By the Journal's estimate, at February's prices — which were lower than today's — Egypt will spend 6 or 7 percent of its revenues on wheat. "By comparison, the U.S. spent a similar proportion of it is revenues on the wars in Afghanistan and Iraq last year," the Journal reports. That, at a time when Egypt is asking the international community for $10 billion in aid.

Democracy or not, the pressure from wheat is bound to get worse: the World Bank estimates that Mideast wheat imports could more than double from 2000 to 2030.

"In Egypt, where wheat makes up a third of the population's diet, the local word for bread, 'aish,' means life," the paper notes.

Read the rest of the article at the Wall Street Journal.