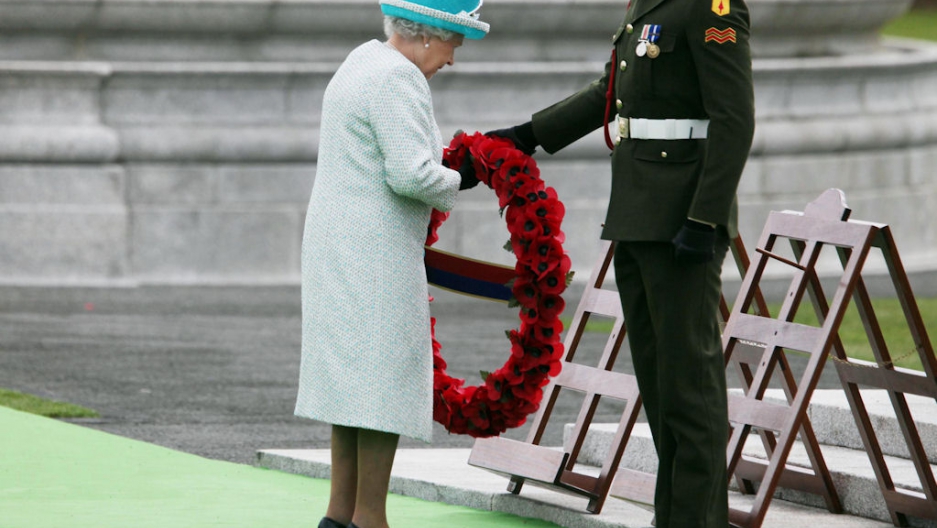 Queen Elizabeth II lays a wreath of poppy flowers at the Irish War Memorial Garden in Islandbridge on May 18, 2011 in Dublin, Ireland.
Credit: Irish Government/Pool
Share

DUBLIN, Ireland — In two days an 85-year-old, slightly-stooped woman, armed with nothing more than a handbag and a smile, has managed to bring relations between Britain and Ireland to a new level of warmth and friendship.

Queen Elizabeth ll, making the first visit by a British monarch to Ireland in a century, made a series of symbolic gestures in Dublin Tuesday and Wednesday that have laid to rest many of the ghosts of the countries' troubled past.

Few people in Ireland ever thought they would see an English king or queen pay tribute to the Irish who died fighting for freedom, or come to Croke Park, the headquarters of Gaelic games and cradle of Irish nationalism. The whole country it seems watched in amazement on television as Elizabeth, accompanied by Irish President Mary McAleese, laid a wreath at the Garden of Remembrance to those who died during the 1916 rising against British crown forces.

There was widespread agreement that this was the moment British-Irish relations were elevated to a new plane. It was “symbolism beyond words” said Taoiseach (Prime Minister) Enda Kenny.

The momentous acts performed by the queen, unthinkable a few years ago, are the culmination of a process of reconciliation between the two nations and the two communities in Northern Ireland that began with the peace process in the mid-1990s.

“At long last we can have fully normal relationships and we hope for a genuinely harmonious relationship between the two states,” said Michael Laffin, professor at University College, Dublin.

Equally important for relations between the two parts of the divided island, the queen and the Irish president traveled today to the war memorial at Islandbridge to honor the Irish soldiers, nationalist and unionist, who fell fighting in the British armed forces in World War I. The wreath-laying ceremony at the once-neglected memorial was attended by unionist and loyalist politicians from Northern Ireland who have long resented the Republic’s reluctance to honor Irish men and women who fell in British uniform. Some 49,400 Irish of both traditions died in the 1914-1918 war and 300,000 Irish have served in the British armed forces around the world since Ireland achieved independence in 1921.

The two wreath-laying ceremonies marked the acceptance in Ireland of a parity of esteem for the war dead of both traditions and “both peoples have been enhanced,” said columnist Kevin Myers, who has campaigned for recognition of the Irish who died fighting for Britain.

Northern Ireland First Minister Peter Robinson said the ceremony at the war memorial broke another taboo in inter-island relations but he regretted the absence of Sinn Fein. Attendance would have been an “excellent opportunity” for Sinn Fein to show respect for the unionist tradition, said Robinson, leader of the Democratic Unionist Party.

Sinn Fein now shares power with the DUP in Northern Ireland, but has not given up its cause of independence from England and unity with the Irish Republic.

Another, and riskier, watershed moment in Anglo-Irish relations came this afternoon, when Queen Elizabeth and her 90-year-old husband, Prince Philip, accompanied by McAleese and her husband, Martin, visited Croke Park in Dublin. The 82,000-seat stadium is home of the Gaelic Athletic Association (GAA), the largest organization, sporting or otherwise, in Ireland, which promotes the amateur games of Gaelic football, hurling and camogie. Croke Park was the site of the Bloody Sunday massacre of Nov. 21, 1920, when at the height of the War of Independence British auxiliaries shot dead 13 spectators and a player.

However GAA president Christy Cooney and scores of sporting dignitaries from all over Ireland gave the royal couple a warm welcome. Cooney presented the queen with a history of the GAA and Prince Philip with a curved wooden hurley stick and a leather ball, known as a slither. In an address of welcome the GAA president referred to the “many tragic events that have hurt us all” and spoke of the determination of Irish people and political leaders “to stand together against violence and hatred.”

“Your presence does honor to our association,” said Cooney, adding that the visit would result in a further underpinning of the peace process on the island.

It was only 10 years ago that the nationalist organization lifted a ban on members of the British forces and the police force in Northern Ireland. A number of prominent GAA players declined invitations to meet the queen, and only County Down from the nine Ulster Counties accepted an invitation to send a representative. Streets around the stadium were blocked off hours before the visit but there were no serious incidents.

Irish and British newspapers hailed the four-day visit of Queen Elizabeth to Ireland as evidence of the final reconciliation of two peoples after centuries of misunderstanding and resentment.

The Times of London described it as “one of the most important visits she has made in her long reign” and the Spectator magazine concluded that Elizabeth “is making some kind of history.”

Some 20 people from small but militant republican groups were arrested during three hours of clashes in Dublin on Tuesday between police and several hundred protesters opposing the visit. As part of the biggest security operation in Ireland’s history, crowds were prevented from gathering anywhere near the venues visited by the queen, including Trinity College in the center of Dublin, founded by her cousin 13 times removed, Queen Elizabeth l, where she inspected the famous Book of Kells.

Elizabeth met Kenny in government buildings where the taoiseach conversed with her beneath a portrait of Michael Collins, who led the Irish forces in the War of Independence and was killed in the Civil War that followed.

The high point on the agenda of the state visit was a dinner hosted by McAleese for the queen and Prince Philip this evening and attended by British Prime Minister David Cameron. The venue, Dublin Castle, was once synonymous with British rule in Ireland.

Kenny said he would raise with Cameron an outstanding issue, the refusal of the British government to release documents relating to alleged British collusion in the loyalist car-bombing of Dublin and Monaghan in 1974 which killed 33 people.

One event today revealed that there was a limit to how far Elizabeth was prepared to go in her embrace of everything Irish.

The royal visitor was offered a brimming, frothy pint of Guinness, poured for her during a tour of the Guinness Store House in Dublin’s St. James Gate, one of Ireland’s main tourist destinations. Her majesty politely declined.