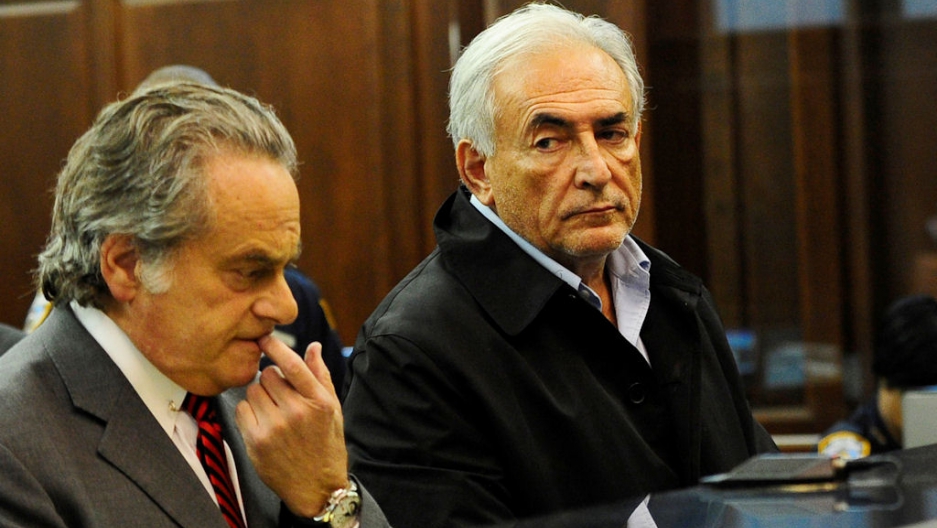 IMF head Dominique Strauss-Kahn (right) attends Manhattan Criminal Court, in New York, with his lawyer Benjamin Brafman on May 16, 2011. A New York judge denied Strauss-Kahn bail despite an offer from his defense team to put up $1 million in cash and surrender all his travel documents.
Credit: Emmanuel Dunand
Share

PARIS, France — As the French watched the man they thought would be their next president hauled off to Rikers Island past frenzied camera crews, shame turned to anger at America’s approach to justice.

“I found that image to be of unimaginable brutality, violence and cruelty,” Elisabeth Guigou, a former justice minister, told reporters. She reflected a broad national mood.

Many accept that Dominique Strauss-Kahn might be guilty of sex crimes. But France, which outlived the guillotine and the Napoleonic Code, takes presumed innocence seriously.

In America, prosecutors amass charges against suspects who then face a judge and jury. In France, investigating magistrates first seek to determine guilt.

“It’s certain that American justice is much more violent,” Eva Joly, a famed former prosecutor-judge, observed in the daily Liberation. In their concept of equality, she said, “Americans don’t differentiate between the director of the International Monetary Fund and any other suspect.”

(Read about what's next for the IMF.)

That may be noble in theory, many French believe, but it fails in practice because suspects arrive for their day in court looking like convicted criminals.

The TF1 evening newscast showed Strauss-Kahn marched into court between two burly guards, disheveled, unshaven and grim with hands shackled behind his back.

“This scene is commonplace in America,” reporter Gilles Bouleau told viewers, with thinly disguised scorn. “When you enter this infernal machine, you emerge in a piteous state even if you are completely innocent.”

That brought a flurry of indignant comments on TF1’s website. “The images are shocking,” one said. “In France, an American would never have had such a fate.”

Jeffrey Fagan, a Columbia University law professor who lectures occasionally in France, said that showing defendants in a bad light is a time-honored ploy.

“Cuffing DSK and perp-walking him is more evidence against him,” he said. “It is typically American. Prosecutors visually convict people, shifting presumption of innocence to guilt. One loses one’s dignity upon arrest. In France, dignity remains at all costs.”

The idea of equality before the law in America is an “aspiration,” he said, essentially a myth. Strauss-Kahn is French, rich and white, accused of raping a black woman in a city that is 50 percent minority.

“This is a trophy for the prosecutors,” Fagan concluded. “It’s like shooting fish in a barrel.”

During demonstrations, one soon learns to avoid the CRS, armed riot troops who can resemble Doberman pinschers in a bad mood. They sometimes herd people into vans. But police follow strict procedure to protect detained criminal suspects from cameras or public display. It's even illegal to show a photo of a suspect in handcuffs until he's convicted.

Reaction to court procedure grew bitterer still as the French watched online and on television what many considered to be a rush to judgment in American media. When the story first broke, the New York Daily News splashed Strauss-Kahn’s photo across its front page with a banner: “Le Perv.”

NBC’s Jeff Rossen was careful to add the qualifier "alleged" before each charge, and the network aired Christopher Dickey, Newsweek’s man in Paris, to add context.

But Rossen said evidence included DNA sampling although nothing had yet been determined by tests. More evidence, he said, was that Strauss-Kahn had left behind one of his mobile phones. Like many reporters, he suggested that Strauss-Kahn bolted from the hotel to Kennedy Airport and bought a ticket to Paris one step ahead of the law. Denying bail, Judge Melissa Jackson appeared to have the same impression.

In fact, as Dickey noted, Strauss-Kahn had booked the flight earlier for a scheduled meeting in Berlin with German Chancellor Angela Merkel and then a European Union conference in Brussels.

News coverage stressed colorful details, such as the $3,000 hotel suite and first-class travel. Whether this is extravagant for the International Monetary Fund director who oversees a trillion dollars is an intriguing question. But it is extraneous. On Monday, an IMF spokesman said Strauss-Kahn paid $525 for the room and had been upgraded to first class.

To many French, American reporters made too much of Strauss-Kahn’s reputation. Clearly, he pursues women. But, as Dickey noted on NBC, he is known as a seducer not a rapist.

One seasoned French journalist who trains young reporters in ethics described herself as stunned at how much Strauss-Kahn has been smeared before trial.

“If he is found guilty he must face whatever American justice prescribes,” she said, asking not to be named. “But when we see him being treated like a dog, we don’t like it.”