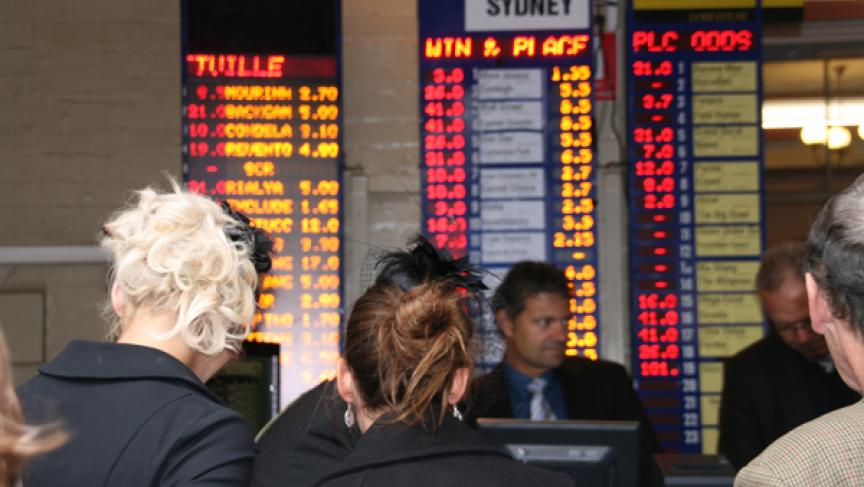 Share
By Jason Margolis In America, we have the story of Thanksgiving. In Australia, they have tales about their founding fathers gambling on horse races. Australians are among the biggest gamblers on the planet: Between 70 and 80 percent of adults gamble at least once a year. (By way of comparison, an estimated 60 percent of Americans gamble.) For most, gambling is harmless fun, part of being Australian, said Ross Ferrar, chief executive of the Gaming Technologies Association. "My grandfather, who was a soldier that fought at Gallipoli, was broke when he came back because he spent all his soldier's wages playing cards with his fellow soldiers." Ferrar told me that story with a smile and a chuckle, the tale of a young man having a carefree flutter, as they say in Australia. But others argue that could be the sign of a man with a gambling problem. They argue that gambling Down Under has gotten out of hand. Roughly 1 in 100 Australian adults are problem gamblers. Estimates vary by state and study, with some studies putting problem gambling closer to 1 in 200 adults. Whether Australians are just having fun or the nation has a mounting gambling problem, it's a contentious issue, and it depends on whom you ask. The question could possibly topple a government. Playing the Ponies To explore the question deeper, I spent a day at the races with a man who has a unique perspective. Clive Allcock is a psychiatrist who has treated problem gamblers for 30 years, but also has written a column for a horse racing magazine for 20 years. Allcock briefly considered leaving his practice and making a go of it as a professional punter, or gambler. "Yes, I did. Well one of the many reasons why I chose not to, is that my wife threatened to leave me if I did go down that pathway," said Allcock. We spent an afternoon together at the Royal Randwick Racecourse in Sydney. Men wore dapper suits and many of the women dressed like flappers from the 1920's. It seemed like harmless fun. For most. "I think that there is a problem with gambling wherever you have gambling. Once you have gambling, you're going to have people who are going to have a problem," said Allcock "(But) there's no evidence that it's overwhelmingly greater in Australia." Problem gambling rates in Australia are about on par with the US, England, and New Zealand. Allcock said he was comfortable, as a psychiatrist working in the field, with current rates of problem gamblers in Australia. "You'd like to get it lower, but you know that you're never going to get rid of it." The Pokies Still, many in Australia's government are convinced their countrymen are gambling too much and that there's a solution. They're not concerned about fun at the race track. They're concerned about electronic gaming machines, called "pokies" in Australia. They're found in hotels, pubs and casinos all over the country. A government-commissioned study concluded that pokies are far more likely to lead to problems than other types of gambling: 15 percent of people who play the pokies are problem gamblers and another 15 percent are considered to be at moderate risk. One independent parliamentarian is so concerned that he's threatening to withdraw his support for the prime minister if curbs on electronic gaming machines aren't put in place. And that could topple a coalition government. Andrew Wilkie from Tasmania wants what's called a "pre-commitment system." Basically, it says if you play the pokies, you can only lose up to a certain amount. Then you're cut off. "The stories that I've heard would bring you to tears. They have brought me to tears: stories of people who have (committed) suicide, stories of people who have been bankrupted," Wilkie said in an interview with the Australian Broadcasting Channel. "And at the moment, the poker machine industry is very loud and very rich and is doing its best to stop these reforms." Un-Australian The clubs and hotel industry have been running commercials, calling the pre-commitment system "un-Australian." A man in a bar asks another man, "I mean, what's next? They'll be telling us how many beers to have next." It's not just a matter of personal liberty, said Ross Ferrar with the Gaming Technologies Association. He said that if people need a card, or license, to play the pokies, they might stop going to clubs or casinos, which pay a tax on gambling profits. But they won't quit gambling. "At home, online, our fear is online unregulated casinos, which of course return no benefit to the community, compared to hundreds of millions of dollars that the hotels and clubs and casinos do return," said Ferrar. That's an argument that state governments are surely watching carefully. In the end, it may be the governments that are addicted to gambling. "When you're starting to generate anywhere up to 10 percent of your state's income through gaming, what do you replace that with?" said Alun Jackson, director of the Problem Gambling Research and Treatment Center at the University of Melbourne. Jackson favors gambling reforms and said it's good the government is discussing a public health approach to problem gambling. But he's not convinced a pre-commitment system is the answer. Gambling addiction is a relatively new field of research, and researchers are still debating the best ways to minimize problem gambling. "And so potentially, we're in the strange position of, what is for many people, a socially very marginal issue, that's problem gambling, having the potential to bring a government down," said Jackson.