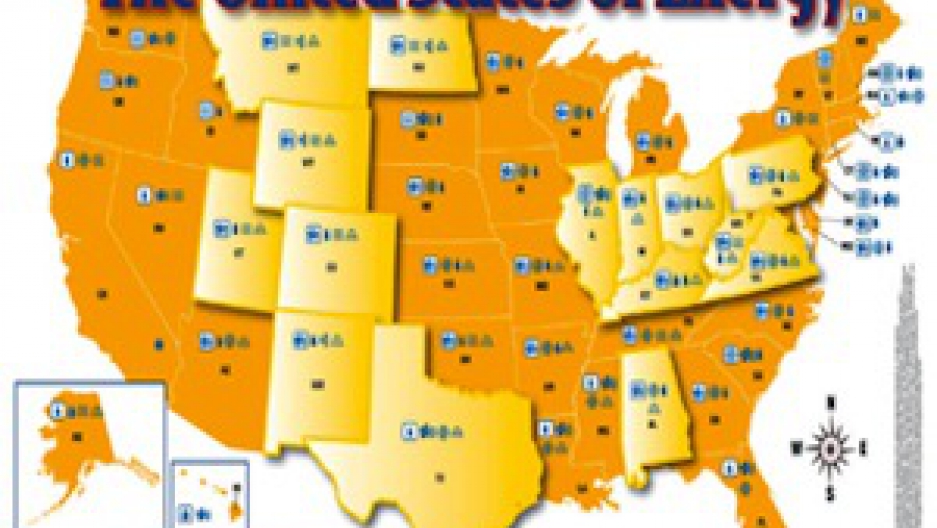 If you went to public school in the United States, you might remember the Scholastic company's book clubs. Scholastic, Inc., is the world's largest publisher of children's books. "Clifford the Big Red Dog," "The Magic School Bus" series are just two of the company's vast offerings made possible because of its partnerships with authors and artists. But now Scholastic is drawing criticism for another partnership - one with the coal industry.

The American Coal Foundation paid Scholastic to help produce and place in classrooms maps and worksheets called the "United States of Energy." At first glance, it looks like an exploration of all sources of electricity. But much of the information comes from the National Mining Association, a coal-lobbying group. And these exercises for children subtly emphasize coal's benefits.

For example, this chart does not mention damage from mining or pollution. The pictured miner doesn't have a smudge of coal dust. The power plant has no smokestack. An attractive map highlights top coal producing states. Solar power shows up only once - in the desert.

These materials strike some education watchdogs and environmental educators as one-sided and not in keeping with criteria for fairness or balance. "You know, they're not really education - they're propaganda," according to Faith Boninger, a research analyst with Arizona State University's Commercialism in Education Research Unit.

It's unlikely that a busy teacher would seek out other materials to provide balance, according to Boninger, especially because the Scholastic brand is so trusted. That reputation was clearly a selling point for the American Coal Foundation. A post on the Foundation's Coal Blog notes: "Four out of five parents know and trust the Scholastic brand."

A Scholastic representative also declined to be interviewed. Instead, she emailed a brief statement, which reads, in part: "Since the program is designed for elementary schoolchildren, the materials do not attempt to cover all of the complex issues around the sourcing and consumption of energy."

The Scholastic partnership is just the latest example of the coal industry's influence in classrooms. In the Appalachian mining communities of Kentucky, Virginia, and West Virginia, mining companies sponsor something called CEDAR, Coal Education Development and Resources.

"All the coverage that the coal industry has received through the years through the media has all been negative," John Justice, who directs the CEDAR program in eastern Kentucky, told Living on Earth. "I mean, you'll just not read anything positive about coal. So we wanted to give students and teachers an opportunity to look at the other side.

CEDAR offers teachers booklets and DVDs produced by coal-burning utility AEP and mining giant Peabody Coal. One emphasizes how Kentucky has benefited from reclaimed mine land. There is little mention of any negatives of strip mining. And on the issue of coal's carbon dioxide emissions, CEDAR offers teachers a video, titled "The Greening of Planet Earth" that asserts: "As more and more scientists are confirming, our world is deficient in carbon dioxide and a doubling of atmospheric CO2 is very beneficial."

The 1991 video was paid for by a group of coal-burning power companies. Its claims are widely discredited. But it's one of the few items CEDAR offers students to learn about climate change. Justice says the Kentucky CEDAR program's biggest annual event is coming later this month, when some 500 students will participate in the regional Coal Fair. Some projects explore geology through the creation of coal, or physics by way of coal combustion. But a number of projects read and sound like industry talking points.

Coal Fair judges will award up to 12,000 dollars in prizes, according to Justice. The grand winners get a trip to Myrtle Beach. Some of this is paid for by Kentucky taxpayers. This year the state budget gave CEDAR 85,000 dollars. Taxpayers have provided about one and a half million dollars over the life of the eastern Kentucky program.

The materials for the coal fair have "just have every angle covered -- they're really very impressive," Boninger told Living on Earth. "I mean, the student buy-in through the projects and the teacher buy-in…I just find those really insidious."

But Boninger doesn't blame the coal industry for trying to clean up its image in classrooms. She says it's the school officials, teachers, and parents who ultimately must decide how children will learn about our energy choices.

Not long after this story went out to member stations on May 13, 2011, Scholastic, Inc., issued the following statement regarding its partnership with the American Coal Foundation (emphasis added):

"Scholastic's children's books, magazines, reading programs and website content are used in most American classrooms – a responsibility and trust that we built through painstaking work through 90 years of service to teachers and schools. A tiny percentage of this material is produced with sponsors, including government agencies, non-profit associations and some corporations. This week, Scholastic came under criticism for an 11" x 16" poster map which displays different sources of energy – coal, nuclear, hydroelectric, solar, wind and natural gas – not so much for the content of the poster but primarily for its sponsorship by the American Coal Foundation. We acknowledge that the mere fact of sponsorship may call into question the authenticity of the information, and therefore conclude that we were not vigilant enough as to the effect of sponsorship in this instance. We have no plans to further distribute this particular program. Because we have always been guided by our belief that we can do better, we are undertaking a thorough review of our policy and editorial procedures on sponsored content, and we will publish only those materials which are worthy of our reputation as "the most trusted name in learning."