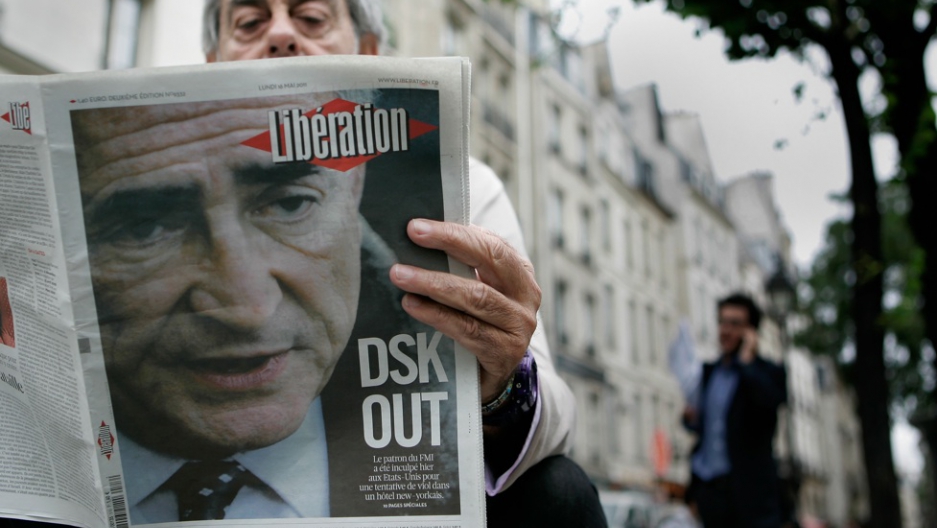 A man reads newspapers with coverage of the U.S. arrest of Dominique Strauss-Kahn, managing director of the International Monetary Fund (IMF) on May 16, 2011 in Paris, France.
Credit: Franck Prevel
Share

BOSTON — International Monetary Fund chief Dominique Strauss-Kahn has picked a very bad time to reveal himself as an alleged lecher.

Not that there's any good time to — as New York City prosecutors claim — sexually assault a hotel maid in a $3,000-a-night Manhattan suite.

As reported today on GlobalPost:

The maid, who police say is a 32-year-old African migrant living in the Bronx with a teenage daughter, said she entered the room on Saturday and saw a man run naked from the bathroom to the bedroom. The maid apologized and tried to leave, but the man allegedly grabbed her, shut and locked the door and pulled her into the bathroom where he forced her to perform oral sex and tried to remove her underwear.

(Read the reaction in Paris to the weekend's stunning news: "He's toast.")

Strauss-Kahn (or DSK in the parlance of the web) has denied the charges and will plead not guilty, according to his lawyer.

But forget those sordid details, and the inevitable charges and countercharges.

In the short run, at least, turmoil at the top of such a key institution isn't good for anyone.

Politics, after all, is the art of getting people to do what they don't necessarily want to do. And by that definition, DSK has been getting the job done for the IMF.

Under DSK's pragmatic leadership style, the IMF has played the soothing middleman between Europe's struggling southern economies and its more successful northern member states like Germany and the Netherlands, where voters tend to take a harder line against bailouts.

Strauss-Kahn has done so by fusing his economics professor street cred with his close relationships with Europe's key political and economic leaders — European Central Bank President Jean-Claude Trichet, French Finance Minister Christine Lagarde, Bank of Italy Governor Mario Draghi, and others, not to mention French President Nicolas Sarkozy and Greek Prime Minister George Papandreou, who turned to DSK for advice in the months leading up to the Greek bailout.

Here's how Simon Johnson, the former chief economist of the IMF, in the New York Times characterized DSK's key role over the past two years:

“The Europeans had been late in waking up to the economic problems,” he said. “But he coaxed rather than bullied them into action. In so doing, he used the crisis as an opportunity to rehabilitate the I.M.F.’s reputation, and put it front and center in a way that it had not been before.”

During DSK's tenure, the fund has played an increasingly important role on the global stage, just as the global economy entered its darkest period in decades. To cite just one measure, emergency IMF loans surged to $91.7 billion in 2010, a record amount. That number was just $1.1 billion in 2007.

“The crisis was a moment of opportunity for the IMF,”  Eswar Prasad, head of the fund’s Financial Studies Division from 2005 to 2006, told Bloomberg in this sweeping profile back in January. “Strauss-Kahn grabbed that opportunity at a very difficult time by thinking big,” Prasad added.

Of course, the IMF is a sprawling, bureaucratic beast. One person cannot take the credit or the blame for everything that has happened since 2008. For now, the IMF says John Lipsky, a former JPMorgan banker and U.S. Treasury official, has been named acting head.

“This is unprecedented,” Simon Johnson, the former IMF economist, told the Times. “We have very little to guide us. For the short term, the staff can handle it, but beyond a week and with regard to the fund’s broader strategy, everything becomes more murky.”

EU finance ministers are meeting today in Brussels to decide whether to give additional assistance to Greece and Portugal, and what steps each country will be expected to take. The IMF finances a third of all eurozone bailouts.

Strauss-Kahn, who is in a New York courtroom today, will not be attended the Brussels meeting as planned. Deputy Managing Director Nemat Shafik will be there instead.

In fact, before his apprehension on an Air France flight at New York's JFK airport, DSK was on his way to a meeting with German Chancellor Angela Merkel to discuss how Germany and the IMF would respond to worsening economic conditions in Greece.