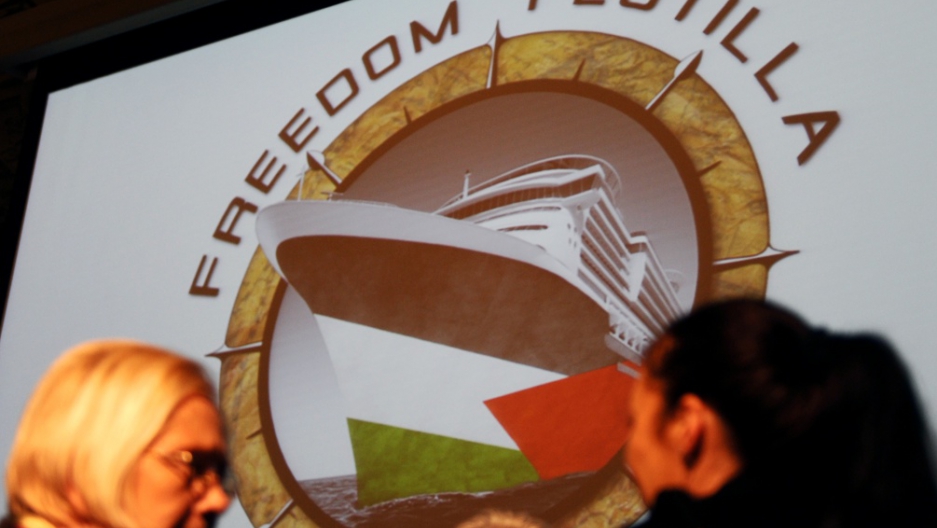 ISTANBUL, Turkey — The organizers of last year’s Freedom Flotilla, which tried to thwart an Israeli blockade and deliver aid to Gaza, but which ended in tragedy, are trying it again.

In mid-June, volunteers from 22 different humanitarian groups hailing from Europe, Asia and North America will once more, as part of the Free Gaza movement, load cargo ships with aid and activists and attempt to land in the Gaza Strip.

Manuel Tapial, head of Rumbo a Gaza (Sailing to Gaza), a Spanish charity, said he was participating for the second time.

“Working with Palestinian refugees in Lebanon made me aware of the suffering they endure,” he said. “Their rights have been severely limited.”

“Ninety five percent of the people working with and supporting Rumbo a Gaza are non-Muslims,” he added. “Solidarity has nothing to do with religion or nationality.”

The first trip ended in the early hours of May 31 last year after Israeli soldiers surrounded the Mavi Marmara, the largest of the ships that made up the flotilla. Nine activists were killed during the confrontation, eight were Turkish citizens and one was an American of Turkish descent. The deaths, along with the injuries sustained by both activists and Israeli soldiers, set off a diplomatic scuttlebutt that continues to sour relations between Israel and Turkey to this day.

Ouassima Ibn Salah, a native of Morocco, moved to Turkey in 2007. She is the foreign press coordinator for Foundation for Human Rights and Freedoms and Humanitarian Relief, known as IHH, which helped organize last year's flotilla.

She said she had been using a computer in the ship’s pressroom at about 4:20 a.m. when she first heard that the ship was being confronted by Israeli forces. She and her colleagues ran outside to get a closer look, she said.

“When I went out I heard different sounds ... bullets, bombs, everywhere [there] was smoke,” she recalled. A helicopter was hovering over the ship, using projectors and lights “so we couldn’t’ see them but they could see us and they were shooting.”

She said she was aware of the dangers and knew it was possible that the boat could be stopped by Israel as it approached Gaza. But she never thought they would be met with such violence. And, she added, the Mavi Marmara at the time of the attack was still traveling in international waters, about 70 miles from Israel’s coast.

“I think they were already waiting for us, not only with the Zodiacs but with the warship and helicopter and submarines,” she said.

The results of an investigation by Turkey into the attack, which set off protests against Israel around the world, was released in February and confirmed Ibn Salah’s version of events. Two civilians were killed even before the Israeli commandos stormed the boat and entered into a confrontation. Seven others would die within the next few hours, according to the report.

Some of the activists, armed with metal bars and chains, did attack Israeli soldiers and and investigation done by the Israeli government, known as the Turkel Commission report, found that “the force used against civilians on board the flotilla was governed by the principles of necessity.”

One of the victims was Cevdet Kılıçlar, who was 38 when he was killed. He had been working as a journalist for IHH and was shot while photographing from on deck when Israeli forces surrounded the ship.

“He didn’t have a weapon, only a camera. Why would you shoot him in the head and call it self-defense?” Ibn Salah asked.

“There was a 13-month-old baby with us. During the whole day he could only get one bottle of milk. When he was just trying to play, guns were [pointed] toward him,” said Ibn Salah.

“They took the baby hostage so his father would go down to the generator. They told him you have to make the generator run or we hurt the baby.”

Lara Lee, an American filmmaker and activist, managed to smuggle her footage off the Mavi Marmara. In one scene, passengers can be seen attending to severely wounded men.

In a television interview, Lee said that the Israelis used “disproportionate force” against men armed only with primitive weapons that they found onboard.

By 5:15 a.m., the Israelis had taken control of the ship. The rest of the day, the passengers were kept “as hostages” as the Mavi Marmara was rerouted to the port of Ashdod in Israel.

From there, Ibn Salah said, they were transferred to a prison where their belongings were confiscated and they were subjected to interrogation, humiliation and extreme cold, which Ibn Salah called “psychological torture.”

The prisoners were made to sign documents that said, “I came to Israel in an illegal way and request to be deported to my country.”

“I was kidnapped by Israeli forces in international waters,” she said.

Despite the horrors she and others endured on that first attempt, Ibn Salah said she was determined make the trip again. This time, she said, they would be more prepared.

In addition to the international group of activists, two European parliamentarians might also make the trip — one Irish and one Spanish. The Free Gaza coalition is also now in talks with the European Union to have the contents of their ships verified by an international team before they sail.

But Ran Curiel, Israel’s ambassador to the European Union, told the Israeli Haaretz newspaper, “The flotilla is clearly a political provocation … since there’s no need for a flotilla to aid Gaza.”

When asked if he thought the flotilla participants would be putting their lives at risk this time around, he simply replied, “no.”

Critics of the flotilla claim that some of the charities have ties to Hamas, the Palestinian political group that now controls Gaza, which Israel considers a militant organization, or that they will bring weapons into area.

“The only weapon that is coming with us is international solidarity, stronger than a gun or a rocket,” Tapial said.