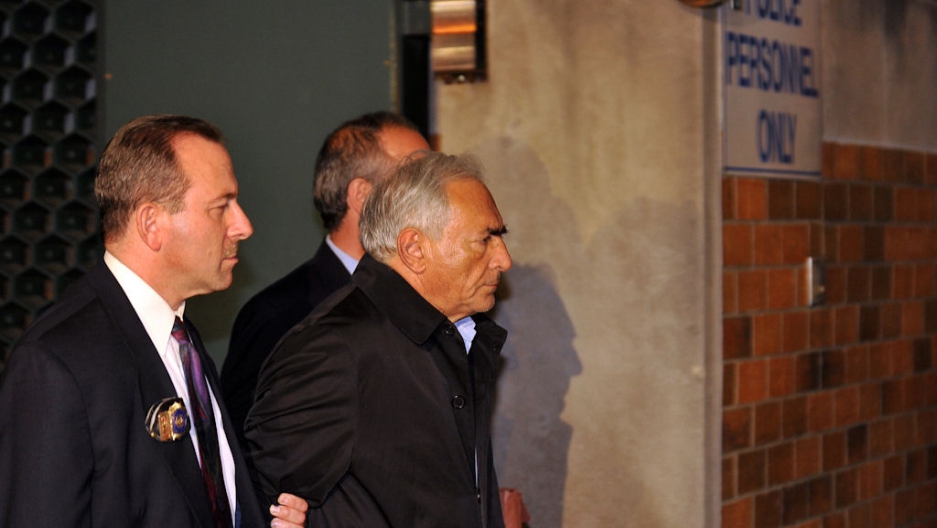 IMF head Dominique Strauss-Kahn (right) is taken out of a police station in New York on May 15, 2011. Strauss-Kahn was charged with attempting to rape a New York chambermaid.
Credit: Jewel Samad
Share

PARIS, France ― However New York courts deal with Dominique Strauss-Kahn, to the French he is toast. The suave global economist favored to unseat Nicolas Sarkozy in 2012 has shamed a society that is not easy to shock.

“DSK Out,” the daily Liberation trumpeted in a front-page banner. Not even Strauss-Kahn’s most ardent Socialist Party supporters or closest friends could convincingly disagree.

(Read about what's next for the IMF).

After a battered hotel maid said he locked her in his room, the 62-year-old head of the International Monetary Fund was hauled off an Air France plane at the gate to be charged with sexual assault, attempted rape and unlawful imprisonment.

And France, addicted to “New York District” ― the U.S. television series “Law and Order” ― watched Strauss-Kahn in handcuffs, gray hair disheveled, on a perp walk in Harlem to be picked out of a lineup.

In an earlier age, the shock might have been defused as details and reaction awaited newspaper deadlines and broadcast schedules. France is indulgent with oversexed politicians.

But the story broke immediately in a dawn tweet by un journaliste citoyen, a citizen journalist who said “a pal in the U.S.” told him DSK was apparently arrested at a New York hotel.

He used a conditional verb form beloved to the French press: “aurait ete arrete.” That means, roughly, “He would (or should) have been arrested ― you figure it out.” Facts soon followed, and France talked about nothing else all Sunday.

Across the political spectrum, the word “humiliation” peppered comment.

Martine Aubry, the Socialist Party leader, said the “thunderbolt” left her “totally stupefied.” Marine Le Pen, of the far-right National Front, all but licked her chops as she expressed contempt.

Strauss-Kahn was scheduled to see German Chancellor Angela Merkel on Sunday before meeting European Union leaders in Brussels to discuss an $85 billion bailout for Greece.

IMF spokesmen in Washington maintained a cool silence, saying only that John Lipsky, the American deputy director, had taken charge until further notice.
Anne Sinclair, Strauss-Kahn’s wife and a widely respected French television journalist, issued a formal statement: “I don’t believe for a second these accusations against my husband.”

Others said Strauss-Kahn had been framed. Violence, his old friends maintained, was not in his nature.

But reporters harvested the internet to quickly dig up past scandals.

Le Figaro, among others, recalled charges in 2002 by Tristane Banon, a journalist and novelist, that Strauss-Kahn undid her bra and tried to strip off her jeans.
She said she amassed a fat dossier and hired a lawyer but decided not to file a complaint.

“I didn’t dare,” she told a television interviewer in 2007. “I didn’t want to be the girl who, to the end of my days, had a problem with a politician.”

Banon said her attacker, whose name was bleeped out on air in 2007, was like “a rutting chimpanzee.”

On Monday, her lawyer, David Koubbi, told the Guardian that she would now make an official complaint.

Her mother, Anne Mansouret, a Socialist leader in Normandy, told the online agency Rue 89 she had asked Strauss-Kahn why he had assaulted her daughter. She said he told her: “I don’t know what happened, I went crazy.”

Later, she told the daily Paris-Normandie she regretted counseling her daughter not to press charges.

“For me, Dominique Strauss-Kahn is sick,” she said. “It’s not an insult to say that. He has a real problem: an addiction to sex, like others have problems with alcohol, drugs or gambling.”

Jean Quatremer of Liberation noted in his blog when Strauss-Kahn was named to head the IMF that he had a problem with women bordering on harassment. In a staid institution with “Anglo-Saxon morals,” he wrote, any perceived misconduct could create a media storm.

Soon after, scandal broke over Strauss-Kahn’s affair with a Hungarian subordinate. The liaison was judged to be consensual. He apologized, and she left the IMF.

According to the weekly Le Point, Strauss-Kahn confronted Sarkozy during a G20 meeting in 2009. He accused the president of compiling a dossier on his private life and threatened to go to court if that did not stop.

Now the court has come to him. Sarkozy and Segolene Royal, the Socialist candidate he defeated in 2007, both called for a presumption of innocence.

But to a nation hooked on fictional cases ripped from the headlines, this dramatic twist removes DSK from any leading role in France.

The Socialists, in disarray, have a year to rally behind a candidate. Odds now favor Francois Hollande, a National Assembly member who lived with Royal until they split in 2007.

Strauss-Kahn, widely seen as a brilliant economist with good ideas for troubled France, still has some support.

But Liberation quoted an unnamed former cabinet minister, a Socialist, who caught the mood: “Unless American justice clears him of all suspicion in one week, DSK is finished.”