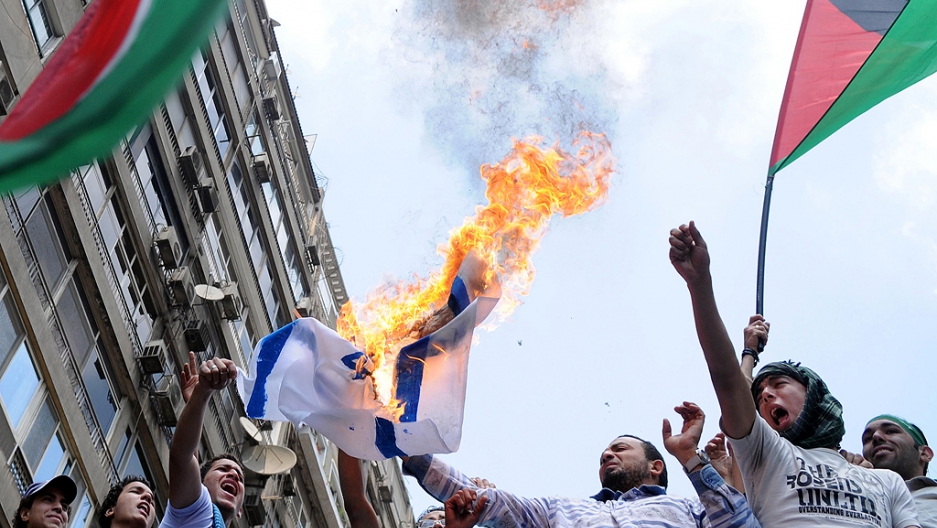 Egyptian protesters burn an Israeli flag during a demonstration outside the Israeli embassy in Cairo on May 15, 2011 in support of Palestinians marking the "Nakba" or the "Catastrophe" of Israel's 1948 creation.
Credit: -
Share

Egyptians who were wondering where their police forces had mysteriously vanished to after the revolution found a disturbing answer last night.

More than 350 people were injured at a demonstration outside Israel's embassy in Cairo on Sunday night, after Egyptian security forces used teargas, batons, and rubber bullets to disperse crowds protesting the anniversary of the creation of Israeli.  Another 18 members of security were reported injured by protesters, according to AP.

Security officials arrested over 100 people as well, capping off one of the most violent crackdowns by security forces since Egypt's recent uprising.

An Egypt-based producer for Al-Jazeera reported on Twitter that security confiscated their camera and destroyed their video tape.

Still, several videos of the clashes have emerged on Facebook and Twitter.  In most videos, gunshots ring out as thick clouds of white tear gas smoke wafts across the night sky in Cairo. In one video, protesters hurl stones and bottles at armored police vehicles as they speed away.

One observer noted that police fired as many volleys of teargas on Sunday as they did on January 28, Egypt's violent 'Day of Anger', when security eventually lost control of Tahrir Square to thousands of protesters in the first battle of Egypt's uprising.  That was also the night Egypt's police inexplicably disbanded, leaving responsibility for the security of the streets in the hands of average Egyptian citizens.

Another eyewitness reported that there was so much teargas smoke in the air that it was drifting into animals' cages at the nearby Cairo Zoo.

Many Egyptians are bewildered by the heavy-handed police response - especially given the security vacuum that led to more than a dozen deaths in sectarian clashes in Cairo last week.

Sunday's clashes are the latest in a series of setbacks for Egypt's interim military-led government, which has been struggling to maintain stability in the Arab world's most populous nation since the February 11 ouster of former president Hosni Mubarak.