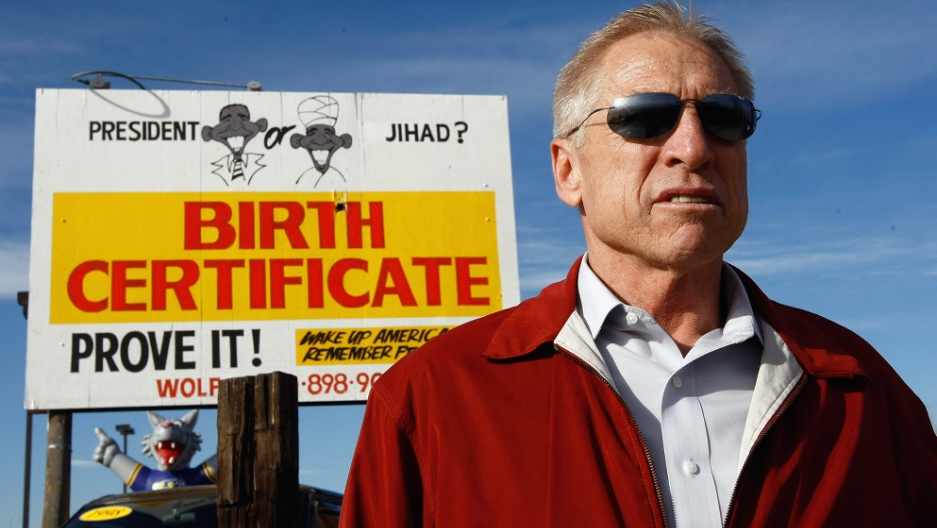 Phil Wolf, owner of Wolf Automotive, stands in front of a billboard on his auto lot on November 21, 2009 in Wheat Ridge, Colorado. Wolf, a birther said he received death threats after posting the billboard.
Credit: John Moore
Share

LONDON, U.K. — In case you missed it, there was political uproar in recent weeks, when a businessman with bizarre hair (and Scottish roots) accused President Barack Obama of being born outside the U.S. and thus unqualified to serve as president, a job that the billionaire appeared to want.

Obama, with one eyebrow raised wearily aloft, eventually undermined Donald Trump's claims by producing a Hawaii birth certificate, laying the issue to rest (at least for most people). A barrage of jokes ensued at Trump’s expense, and the Donald was left slack-jawed in the limelight, lacking the main platform of his putative candidacy, until today, when he announced that he would not run for president.

While Obama may have ended speculation about his own birth right, arguments over the clause in Article Two of the U.S. constitution, which states “no person except a natural born citizen” can stand for office, are likely to rumble on.

Theodore Ruger, a University of Pennsylvania professor of law, told GlobalPost there is now a “rising chorus” of constitutional scholars who view the clause as “an outdated artefact that ought to be jettisoned,” not least because dozens of countries seem to abide happily without it.

Certainly, a look at the interminable pages of legalese that make up democratic constitutions elsewhere shows that few are as persnickety as the United States when it comes to unlocking the doors of office. Constitutions in some countries, in theory, would even allow Obama-the-American to serve as head of state.

That said, although there are instances of foreigners taking the top job in other countries, few have done so without generating controversy of their own. So how do the rules differ from nation to nation — and why is the United States so protective?

Constitutional experts say this 223-year-old embargo on foreign-born presidents seems to have been born of fear among the founding fathers that unpatriotic European royals could cross the Atlantic to inveigle the new country’s offices of power and break apart their more perfect union.

Canada, apparently, wasn’t as paranoid. Michaelle Jean, former governor-general and acting head of state, was born in Haiti and, before she took the job, held dual French citizenship. As part of the Commonwealth of Nations, Canada also accepts Queen Elizabeth II as its monarch.

This laissez-faire attitude is repeated across Britain’s former colonies, with the queen (herself a descendant of German monarchs) holding symbolic, if not administrative, sway over 16 separate countries. One of these, Australia, last year installed Wales-born Julia Gillard as prime minister.

Though never a deal breaker, Gillard’s place of birth did raise some hackles. The Australian reaction was, however, relatively muted compared to that which confronted Italian-born Sonia Gandhi’s rise to the top of Indian politics.

As elected president of the ruling Indian National Congress party, Gandhi had been in line to become prime minister in 2004, but amid outcry from opposition parties who said her 1983 adoption of Indian citizenship was not enough, she instead appointed Manmohan Singh.

If we overlook Austrian-born Adolf Hitler’s rise to become German chancellor and the inter-breeding of the continent’s royalty, Europe has seen relatively few foreigners take charge even though few countries legislate against the possibility.

In France, where you could be forgiven for thinking a complicated love life was mandatory for presidential hopefuls, there are no stipulated requirements other than the candidate gets elected. In Italy any citizen over 50 can qualify, while in Germany the age barrier is 40 (in the U.S., it’s 35).

Britain’s ambivalent relationship with its immigrant population appears to have had no impact on laws governing leadership. Its prime minister is drawn from the ranks of sitting members of parliament, which have over the years included several citizens who began their lives abroad.

The country has, however, only experienced two prime ministers not spawned on what is now considered U.K. soil: Bonar Law, born in New Brunswick (then under British control but now part of Canada) who served a brief term of office in 1922-23; and Arthur Wellesley, in office twice in the 19th century, who was born in Ireland at a time when it was ruled from England.

South of the American border, several countries look to their northern neighbor for inspiration. In Mexico, presidents must be a citizen by birth, over 35, have at least one Mexican parent and have been resident for 20 years. Brazil also insists on a natural-born president.

In Peru where similar rules apply, Obama-style questions of eligibility dogged Alberto Fujimori, a Peruvian of Japanese descent, throughout his 1990-2000 presidency even though he produced a certificate showing he was born in Lima.

Of course, Obama isn’t the first political figure in America to raise constitutional questions, although a direct challenge to Article Two’s magic clause has never made it into court.

At the height of his popularity as governor of California, Austrian-born Arnold Schwarzenegger inspired calls for the constitution to be amended. Unsurprisingly, these faded in step with his approval rating.

Republican former presidential candidate John McCain’s birthplace in the Panama Canal Zone — albeit on a U.S. naval base — was raised as an issue in the run up to the 2008 election, but ultimately dropped amid much wrangling over the meaning of “natural-born citizen.”

In the 1968 presidential campaign, Republican hopeful George Romney (father of Mitt Romney) made headlines when it emerged he had been born to American parents in Mexico. Again the controversy evaporated, this time when Richard Nixon was chosen to run for office.

Back on the other side of the political tracks, former Michigan governor Jennifer Granholm was once touted as a possible Democratic presidential candidate, but would have been ruled out because she was born in Canada.

Experts say the fact that this issue crops up time and again indicates that, in our modern, globalized world, Article Two is struggling to maintain the justification it may have had in 1787, despite Trump’s concern. However, they acknowledge change is unlikely.

“I think that if Americans were to reconsider today whether this should be in the constitution it would be controversial,” Rogers Smith, professor of political science at the University of Pennsylvania, told GlobalPost.

There is, however, some good news for Trump. Recent political events in Scotland have raised the prospect of independence from London for the homeland of Trump’s mother. Under proposed rules, Trump would be both eligible for citizenship and, theoretically, leadership.