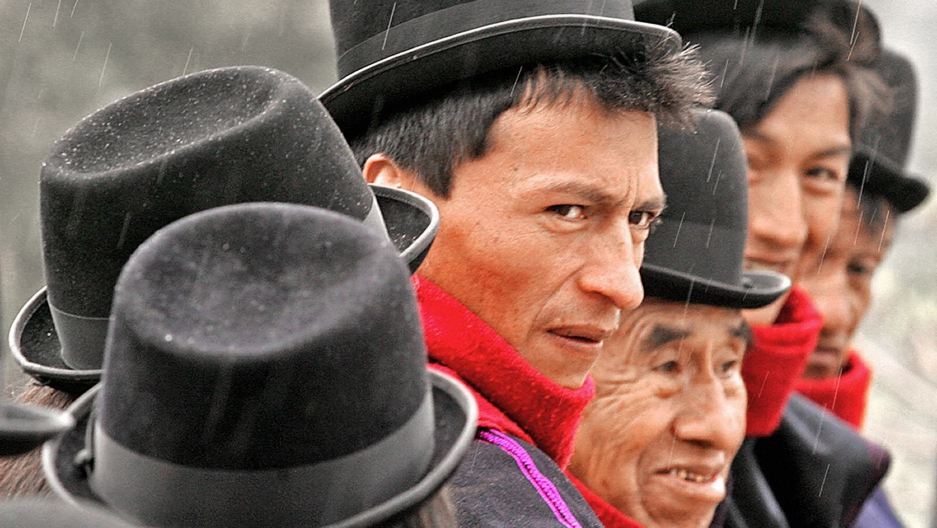 BOGOTA, Colombia — Eudosio Becerra says it’s nearly impossible for him to converse in his native tongue.

Only about 50 people still speak Uitoto, out of the 600 members of the indigenous Uitoto tribe in the southern Colombian jungle. The rest communicate in Spanish which they view as more modern and useful.

Uitoto is one of 68 indigenous languages spoken in Colombia, but only three are spoken by more than 50,000 people. In fact, about 30 are in danger of disappearing altogether, said Daniel Aguirre, who heads the Center for the Study of Aboriginal Languages at the University of the Andes in Bogota.

"We have languages, like Barasana, that only 200 people speak,” Aguirre said. “The last speaker of the Tinigua language died three years ago.”

With both Atlantic and Pacific coastlines and located close to Caribbean islands, Colombia has long been a crossroads for indigenous groups. In the 1500s, Spanish explorers reported that native peoples here spoke at least 300 distinct languages.

Many survived thanks to Colombia’s diverse topography of mountains and jungles that allowed tribes to remain isolated from Spanish-speaking outsiders. Today, Colombia ranks fourth in the world in the number of spoken indigenous languages, after Brazil, Mexico and Peru.

But indigenous groups are coming under massive pressure to assimilate.

Unless located on tribal lands, public schools ignore indigenous languages and teach in Spanish. Rather than evincing pride in their language, many indigenous youths adopt Spanish as a way to move up in the world. Even higher education sometimes gives indigenous dialects short shrift.

Rafael Epiaje, a Wayuu Indian, recalled how he was asked to learn a second language to meet graduation requirements at Bogota’s National University. Epiaje replied that he spoke both Spanish and Wayuu, but school administrators said Wayuu didn’t count.

Thousands of indigenous people have been uprooted by Colombia’s ongoing drug and guerrilla war. In search of jobs, others have moved to the cities and learned Spanish. Meanwhile, Spanish is encroaching on remote tribal areas as private companies explore nearby regions for gold and set up industrial farms while some settlers grow coca or opium, the raw material for cocaine and heroin.

Aguirre, who has spent years studying the language of the Embera, says his work with that indigenous group has become more difficult because more and more Spanish words are being mixed with the local dialect. He estimates that one indigenous language in Colombia disappears every two years.

"We didn’t recognize what we had,” Aguirre said. For a long time Colombians “didn’t value these languages because Indians were deemed the lowest members of society.”

Yet language is the connective tissue of indigenous cultures, said Juan Mayr, a former Colombian environment minister. “It reflects people’s traditions, history and cosmology,” he said. “That’s why if you lose the language you immediately lose the culture.”

Linguists and anthropologists are sounding the alarm. The National University, which years ago dismissed Wayuu, now offers courses in Nasa, Uitoto, Embera and Wayuu — which is taught by Epiaje, the former student.

During one of his recent classes, Epiaje recited the numbers and expounded on their deeper meaning. Pronouncing “one” in Wayuu, he explained, goes beyond numerical value because it can also signal support for the collective good of the community.

One of Epiaje’s students, law major Pablo Gonzalez, described Wayuu as difficult to learn but he plans to stick with it.

"I want to know about the different cultures of my country,” he said. “Everybody speaks French and German but how many people speak Wayuu?"

Since the 1960s, the Summer Institute of Linguistics, now known as SIL International, has sent hundreds of missionaries to Colombia. In their efforts to translate the Bible and promote Christianity, they put together a written database of 38 indigenous languages.

One of the missionaries, Minnesota native Ray Rising, helps produce radio programs that broadcast Bible stories in indigenous languages and hands out solar-powered radios so Indian communities can tune in.

Due to the group’s evangelical mission “some people don’t like what we’re doing,” said Rising, who was kidnapped by Marxist rebels in 1994 and held hostage for two years. “They think we are destroying Indian culture but we are enhancing it.”

Still, Aguirre and other experts predict only a few indigenous languages will survive into the next century. They may be right. On a recent afternoon at National University, Becerra taught Uitoto to a classroom filled with empty desks and just eight students.

"I give the language less than 20 years,” said Becerra, who is 61. “When my generation dies out, that will be the end of it.”