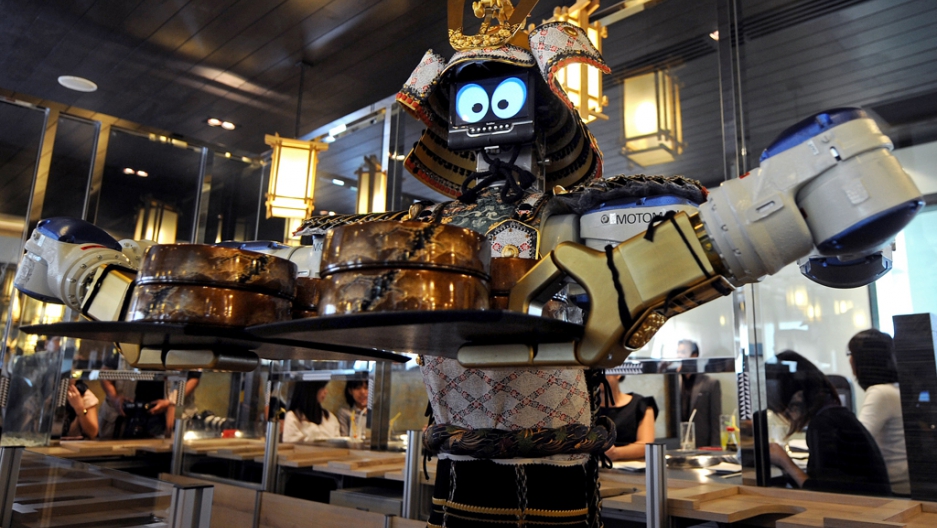 A robot waiter holds a tray of food at a Japanese robot restaurant in Bangkok on April 1, 2010.
Credit: Pornchai Kittiwongsakul
Share
.incontent{display:none;}

Now, in Asia at least, robots are encroaching on yet another occupation: waiting tables.

The trend is official. In the past three years alone, robot food servers have appeared in Japan, South Korea, Hong Kong and mainland China. The latest restaurant to employ robo-waiters, a Japanese-themed sushi-and-bareque eatery in Bangkok, has even fitted its bots with samurai plating and prop swords.

Should the developed world brace for a coming wave of robo-waiters? Maybe, according to robotics experts contacted by GlobalPost. But waiter bots, they say, will remain less competent than humans for some time to come.

Human waiters will actually prove quite resilient, according to Illah Nourbakhsh, a professor at Carnegie Mellon University’s Robotics Institute. The advantage is personality, among the hardest assets to replicate in robotics.

“The robot can’t do banter or upsell or say, ‘You’ve got to get this dessert because I had it last week and you’re gonna love it,’” Nourbakhsh said.

In fact, they can barely hold a conversation. So far, Asia’s various robot waiters amount to a new-wave Chuck E. Cheese-style spectacle. Some can interpret basic voice commands, as can $50 mobile phones. They can deliver trays of food and bus tables, but only along a fixed route.

And they cost much more than humans, especially in Asia, where a 10-hour shift of taking orders and running food trays typically pays less than $10. The two waiter bots at Bangkok’s Hajime Robot Restaurant, for example, cost a total of $930,000.

What Asia’s robo-waiters may herald, however, is the ATM-ing of restaurants.

Because robo-waiters aren’t yet conversational, diners at robot restaurants tap out their food orders on a table-mounted touch screen or a unit fixed to the robot’s belly.

This may ingratiate more people to human-free food ordering, just as humans were trained to bank via machine and scan Fruit Loops at the grocery store.

“At first, such technologies may put people off. But eventually most of us accept these possibilities as an option that you can choose if you want to,” said Henrik Scharfe, associate professor at Denmark's Aalborg University and director of center for Computer Mediated Epistemology.

Scharfe’s work focuses on humans’ emotional responses to robots. His personal robo-clone — complete with graying goatee scruff — is so unsettlingly accurate that it’s risen to YouTube celebrity status. But even Scharfe concedes that “if you like small talk or even flirting a little with the waiter,” today’s bots will prove unsatisfying.

Consider “Yumbo,” a robot that will debut this year at Thailand’s popular hot pot franchises, MK. An estimated 10 shops will get a Yumbo bot, which has the height and voice of a pre-pubescent boy. He travels on rubber treading and can carry a single food tray.

Yumbo can squeak out “Happy Birthday” and some niceties in Thai. And thanks to radio-frequency identification tags, he’ll never deliver food to the wrong table.

But Yumbo can’t field complicated questions. A similar bot is deployed in restaurants in Hong Kong and in China’s northern Shandong province, where waiter bots ply the aisles on three-wheeled carts.

However, Scharfe believes the dawn of more competent waiter bots is relatively near. Waiters and patrons already follow a well-worn script, he said, “with a pattern of communication that is very predictable.”

Scharfe noted that, through hand gestures he once negotiated a suit’s style, fabric and price with a human Shanghai tailor. He also recently ordered food at a Japanese shop through pointing. In such predictable scenarios, he said, robots could play the role of clerk if humans are willing to tolerate a “less than perfect interaction.”

“Both parties have a clear understanding of the situation and their role in it,” he said. “This is also why it is relatively easy to have a machine performing one role in the game.”

But Nourbakhsh, the Carnegie-Mellon roboticist, is less convinced. He predicts that in the not-too-distant future some enterprising restauranteur will attempt to deploy waiter bots boasting enough artificial intelligence for a full-on, back-and-forth chat.

“That idea will come and it will fail,” he said. “People will assume it has more intelligence than it does. But it won’t be able to answer a lot of your questions. And it’ll be very boring.”

The other big shortcoming of robots is mobility. Bots are far less nimble than human waiters. The models that share the aisle with humans, relying on motion sensors to avoid obstacles, can only slow down or stop to avoid collision. They must also follow a set path marked on the floor in white striping.

“In a busy place with other waitresses moving around and 6-year-olds running to the bathroom,” Nourbakhsh said, “robots have to move slowly and carefully.” That means dinner may arrive at room temperature if it’s traveling in robot pincers instead of human hands.

But at least two eateries have sidestepped this problem with a bots-only lane of travel. At Bangkok’s Hajime, which opened last year, the man-sized robots zip back and forth on a rail. Tables line the track on both sides. When the bot arrives with dinner, a plastic window slides open and the food is passed through.

Similarly, a South Korean cafe that employs much smaller bots — no bigger than a microwave — offers its bots a dedicated pathway elevated to table height.

While fun and amusing, “it’s really just a conveyor belt, bringing food from the kitchen, with lots of bells and whistles,” said Devendra Garg, head of Duke University’s Robotics Laboratory. “Everything is within a constrained format.”

“These robots don’t have to react to unanticipated situations,” Garg said. “There’s a lot more work to be done in research laboratories before we get to that point.”

The real asset machines bring to eateries is high-speed computation on the fly, Nourbakhsh said. A fellow Carnegie-Mellon roboticist has invented a system that can scan cars in a drive-thru lane and predict how much food each car will order. (Hint: SUVs order more fries than sedans.)

Its findings are displayed to cooks, who are commanded to prepare a precise amount of food even as the vehicles turn into the parking lot. The customer’s meal arrives more freshly cooked and money wasted on unsold, pre-prepared burgers is saved.

“This is where robots will succeed,” Nourbakhsh said. “They’ll do what humans can’t even imagine doing.”

How much longer until we get robot waiters that can field diners’ questions, sidestep toddlers in the aisle and do it all for at less cost than a human?

“Forty years,” said Nourbakhsh. “And nobody wants to invest too much money into research because humans do such good job of it.”